Joe Wieskamp conquered high-school ball, has navigated his way to production in college, and still has time to impress at Iowa. 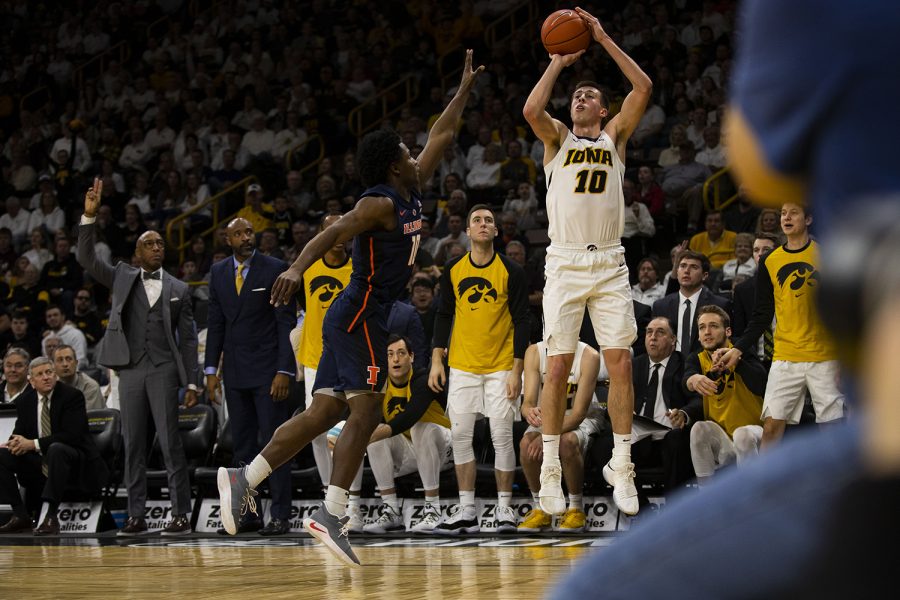 Joe Wieskamp is more than just a freshman with eight Big Ten games under his belt for Fran McCaffery’s Iowa squad. He’s so much more.

Wieskamp can put the ball in the hoop from anywhere on the floor, and he showed it in his last game — his best performance as a Hawkeye.

In Iowa’s win over Illinois on Sunday, Wieskamp dropped 24 points on 8-of-8 shooting (6-of-6 from 3-point range, tying a Hawkeye record), 5 rebounds, and 3 assists.

Wieskamp has reached double figures in each contest of the Hawkeyes’ five-game winning streak, continuing to display his abilities in Iowa’s best start since 2015-16.

“I have the confidence every game that every shot I take is going to go in,” Wieskamp said.

Recently it has felt like every shot Wieskamp takes is a good one. He’s now averaging 11.9 points to go along with 5.1 boards.

Wieskamp possesses the ability to take over games, but when he is off, things don’t go Iowa’s way.

When Wieskamp has at least 15 points, Iowa has won each game by double digits, except for the Hawkeyes’ 1-point win over Pittsburgh. But all three of Iowa’s losses have come when Wieskamp failed to score 10 points.

Although his career is just 19 games old, it’s clear how important his production is for Iowa’s success.

“I don’t think he realizes how good he can be,” guard Jordan Bohannon said. “He doesn’t show a lot of emotion sometimes, and we kind of help him out with that, but that’s a good thing. He’s really determined and focused on the moment and what he’s willing to do to help the team…He’s got a bright future.”

Wieskamp had an exceptional high-school career at Muscatine High, approximately 29 miles southeast of his new home in Iowa City.

He became the all-time leading scorer in Iowa high-school basketball his senior season, was a two-time Iowa Gatorade Player of the Year, and set virtually every scoring and rebounding record at Muscatine.

Wieskamp was one of the best prep players to take the floor in Iowa, but his improvements have taken him to new heights in the college game.

“I think I’m getting a lot better, making big strides this year,” Wieskamp said. “Obviously, I was a pretty good player in high school, really good scorer, but I think I’ve adapted my game, made myself that much more of a threat defensively, rebounding, finding guys [Sunday]. I think if I just continue to work, the sky’s the limit. Obviously, my goal is to be in the NBA one day, so I’m working toward that.”

Illinois head coach Brad Underwood, who had to suffer through Wieskamp’s dismantling of the Illini, was also fascinated by the freshman.

Underwood said he never watches warm-ups but went out to see Wieskamp’s routine for himself before joking that his skill made him physically sick.

“That kid’s going to make a lot of money someday,” Underwood said.

Along with his ability on the court, what McCaffery saw of Wieskamp off the floor impressed him as well.

“I mean, if you can’t get along with Joe Wieskamp, then you’re the problem; it’s that simple,” McCaffery said in November. “He’s that easy to get along with. Everybody likes him. He’s one of those guys that he’s going to fit in the locker room…There’s no selfishness in him at all. He’s a gamer.”