Iowa women's basketball faces off against Rutgers in a battle between two of the top teams in the Big Ten. 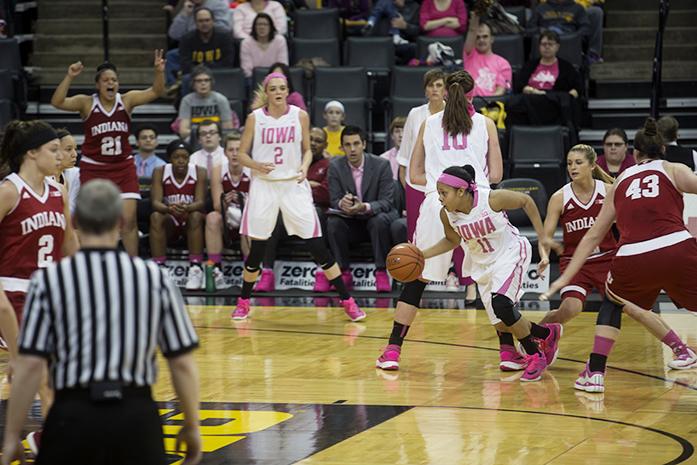 Iowa's No. 11, Tania Davis drives past the Indiana defense at the Carver-Hawkeye Arena in Iowa City, Iowa on Sunday, Feb. 21, 2016.

Athletes often like to play down the importance of games before they take place, but there is no arguing that some games are just bigger than others.

That can be said for the No. 17 Iowa women’s basketball team’s next game: this evening against No. 14 Rutgers.

The game isn’t just big because it’s a matchup between two top-20 teams, it’s a game that could have major implications in the Big Ten race.

Rutgers comes into the game atop the Big Ten standings with a 15-3 (7-0 Big Ten) record with three teams tied in second place, two games behind it. The Scarlet Knights also arrive in Iowa City on a 10-game winning streak.

One of those second place teams is Iowa (14-4, 5-2 Big Ten), and with this team’s goal being a Big Ten title, this is a massive game, even if the Hawkeyes try to deny it.

“We know this is a big game,” guard Tania Davis said. “But every game is big in this conference. We’re excited about [the game], but we’re taking it one day at a time.”

Rutgers will have a different look from the squad the Hawkeyes beat 77-67 last season — all five starters are different.

“This is a much-improved Rutgers team,” head coach Lisa Bluder said. “Namely because they’ve gotten so many transfers, so they’re a different-looking team because of that.”

None of those transfers has been bigger than Stasha Carey, who in her second season in Piscataway has averaged 10.2 points per game, along with 5.9 rebounds and 1.6 blocks.

Carey has also been the leader on defense, which has been the strength of the Knights, helping to hold opponents to just 53.9 points per game, good for ninth in the nation.

Rutgers’ good defense has come courtesy of good play in the post, with the Knights ranking 17th in the nation in total blocks (91) and ninth in field-goal percentage allowed, holding opponents to just 33.8 percent.

“[Their defense] is very intense,” Davis said. “We have to pick apart their defense. We have to reverse the ball, get open looks, and not just take the first thing that’s there.”

Fortunately for the Hawkeyes, they believe they’ve hit their shooting groove. During their current three-game winning streak, Iowa has shot a blistering 60.8 percent from the field.

The run of lights-out shooting has helped Iowa climb to No. 1 in the nation in shooting percentage (52.2).

“We’ve shot the ball really, really well,” Bluder said. “I’m so glad that our shooters are getting into their rhythm again. It’s happening at the perfect time.”

The Hawkeyes will also have an edge with home-court advantage.

They’ve been stellar on the floor of Carver-Hawkeye the past two seasons, going 22-3, including 2-1 against top-20 teams. With both the men and women playing top-20 teams on back-to-back nights, it should be a fun atmosphere for Iowa.

“We’re hoping our Hawkeye fans will be there and be loud,” forward Hannah Stewart said. “We’re happy this game is at Carver. We know this game will be scrappy on both sides. They want to keep that top spot in the Big Ten, and we definitely want to take it.”

The game will be the first of two-straight home games for the Hawkeyes, with the other against Purdue at 2 p.m. Jan. 27.