Iowa outshines its competition with the help of scoring bonus points and the domination of Alex Marinelli. 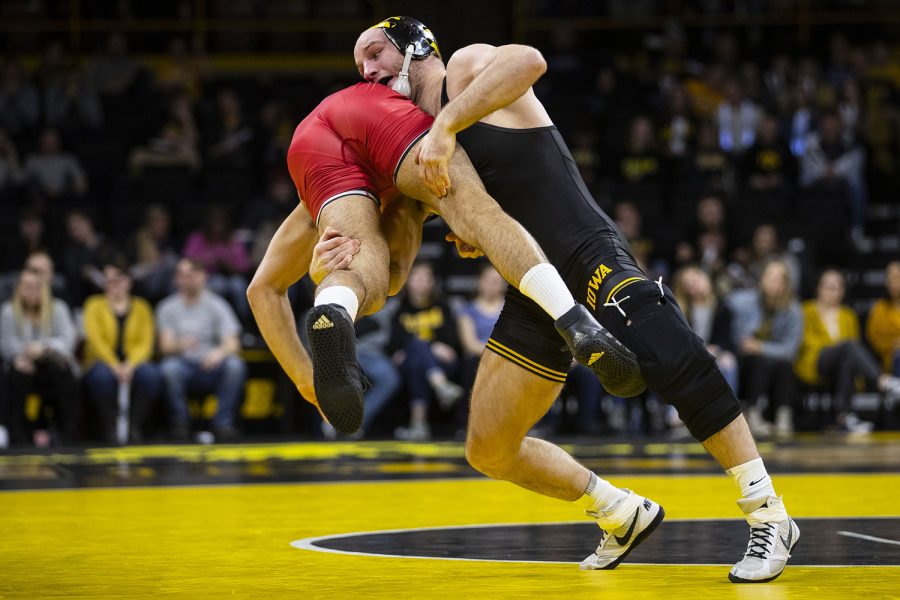 Coming off wins against two ranked opponents — No. 7 Minnesota and No. 20 Rutgers — Hawkeye wrestling hopes to continue its excellence. With its success, there are a few statistics Iowa will try to maintain during the second half of the season.

The No. 4 Hawkeyes are undefeated, with a dual-meet record of 8-0.

The Hawkeyes have tallied five wins against currently ranked opponents, No. 22 Princeton, No. 18 Purdue, No. 16 Iowa State, No. 7 Minnesota, and No. 20 Rutgers.

Their closest dual was against Iowa State, in which they only won by a single point, 19-18. Other than that, the Hawkeyes have won as a team by 14 or more points against each top-22 team.

Iowa traveled to Hoffman Estates, Illinois, over winter break to compete at the Midlands Championships. Along with being 8-0 in dual meets, the Hawkeyes crowned two champions — 133 pounder Austin DeSanto and 165 pounder Alex Marinelli, then claimed the team title.

In the upcoming weeks, the Hawkeyes will face four more ranked teams before the Big Ten Tournament. On Jan. 25, Iowa will take on No. 19 Illinois. Other ranked Hawkeye opponents include No. 9 Nebraska, No. 11 Wisconsin, and No. 3 Oklahoma State.

In their eight dual matches, the Hawkeyes have tallied 63 bonus points while only giving up 10 — 3 of which came from an injury-default loss.

The Hawkeyes recorded their most bonus points against Kent State. Max Murin, Pat Lugo, Kaleb Young, and Marinelli all picked up pins, Spencer Lee won on a technical fall, and Cash Wilcke won by major decision. The Hawkeyes topped the Golden Flashes, 45-0.

Although Iowa snagged 7 bonus points against Lehigh and won 28-14, it gave up the most bonus points it has all season.

Two Hawkeyes — Jeremiah Moody and Aaron Costello — lost to their opponents by major decisions. At 197, Steven Holloway was pinned by No. 14 Jake Jakobsen. This was the only time a Hawkeye has been pinned in a dual meet.

There is only one Hawkeye wrestler who has wrestled in every meet and tournament without losing. All-American Marinelli has an individual record of 13-0 and has put up 23 bonus points for Iowa this season — more than any other Hawkeye.

Marinelli registered a pin and major decision at the Midlands while facing three top-20 opponents in a row to reclaim his champion title. He won by decision against No. 19 Jonathan Viruet, No. 5 Joshua Shields, and No. 2 Evan Wick and put himself on top of the podium.

Overall, the back-to-back Midlands champion has recorded 6 pins, 1 technical fall, and 3 major decisions in his 13 matches this season.

The Hawkeyes will continue their season with dual meets on Jan. 25 and Jan. 27 against Illinois and Northwestern.