Researchers from the College of Engineering plan to use a drone to spot harmful algae in Iowa’s water supply. 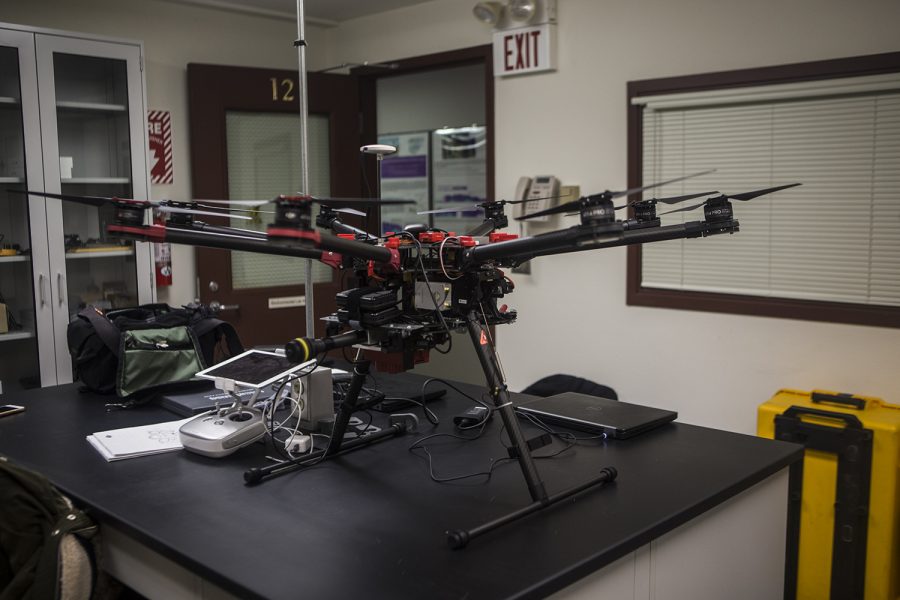 Drone seen in environmental sciences lab on the University of Iowa Campus on Monday, January 14, 2019. Graduate student Sarah Douglas will use the drone to conduct research on algae in Iowa.

Researchers in the University of Iowa College of Engineering are using drone-imaging technology to map harmful algae in Iowa’s water.

The project, led by Assistant Professors Corey Markfort and Gregory LeFevre, was inspired by the desire to use remote-sensing approaches to monitor water safety and quality.

Because Markfort grew up on a lake and has worked on lake restoration and water-quality modeling since 2003, he was interested in seeing how water supplies could be protected from toxins.

LeFevre said harmful algal blooms are becoming a critical issue around the world, and they are becoming more common in Iowa.

RELATED: Updated approval process makes it easier to use drones on campus

“Harmful algal blooms generate potent toxins that present an acute hazard for people through drinking water and contact recreation, like swimming or boating,” LeFevre said. “This is an obvious and important public-health risk, but also impacts local economies that depend on tourist activities.”

Throughout the summer and fall seasons, when algae bloom in water sources, the team will use a drone to use a multispectral camera to image entire lakes. With processing, the abundance of algae over the entire lake can be seen.

“With increases in the occurrence of blooms of harmful algae in freshwater lakes, I thought our new modeling and sensing tools could be used to improve detection and forecasting of blooms,” Markfort said.

Current methods of high-frequency detection seem to take lots of time and effort, Markfort said, and he believes the drone will help to be more efficient and accurate.

The drone has been used for a number of engineering projects in the past, having originally been designed to analyze wake patterns on wind farms. The equipment is also being used to study snowdrifts.

Graduate research assistant Sarah Douglas, who works on the drone project, said a smaller drone could be used for algae mapping, but because of accessibility and the observational tools already built into this particular drone, the research team will use its imaging abilities.

Markfort and LeFevre hope to use the drone’s images to better predict when harmful blooms will occur as well as help community members make efficient and beneficial decisions on how to best protect their water supplies.

“In a lot of areas, lakes provide drinking water, and if toxins get into the water, this will cause shutdowns of the water supply,” Douglas said. “We’re trying to get people aware of this problem and to improve their public health.”

Future goals for the researchers using the drone include making detection faster and more cost-efficient, as well as developing techniques to protect humans and livestock from potential poisoning.

“These issues are very complicated, and there’s a lot that goes into solving problems like these,” Douglas said.