Iowa remained undefeated thanks to a quick start and big finish. 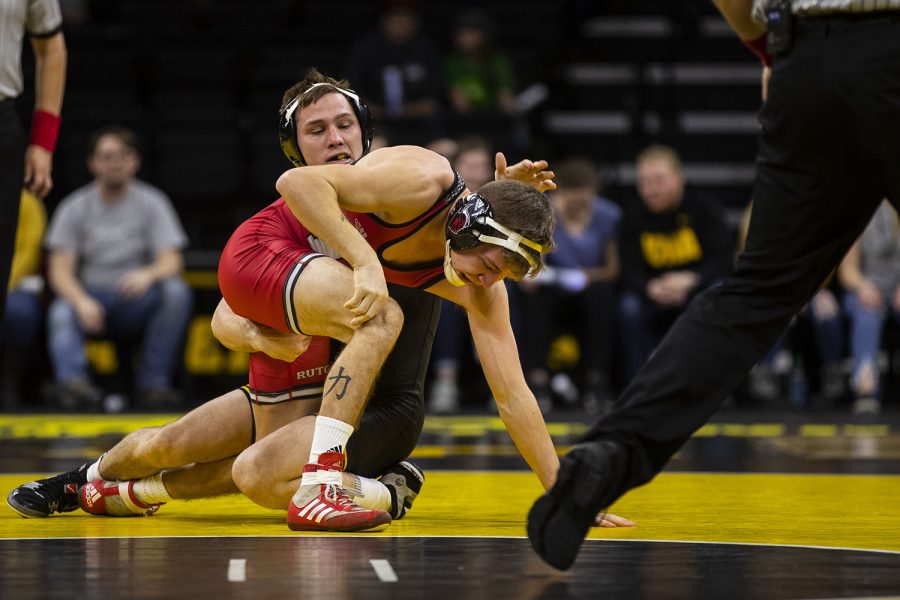 After Spencer Lee lost to Northwestern’s Sebastian Rivera at the Midlands Championships and defeated his Minnesota opponent, 4-0, fans started to raise questions and concerns about what was wrong with the 2018 125-pound national champion.

“People want to know what is wrong with Lee, but they really don’t,” head coach Tom Brands said after Lee’s Minnesota match. “I mean 4-0, the guy didn’t score a point on us. We can pick up our pace and those types of things and we’re moving in that direction.”

Lee certainly picked up his pace against No. 20 Rutgers Friday. Lee and Rutgers’ Nick Denora were only on the mat for 38 seconds. In those 38 seconds, Lee tallied a 4-point near fall and a takedown before putting Denora on his back. If Lee ever did leave, he’s definitely back.

“I’ve just got to get ready for every match like it’s the biggest match in the world,” Lee said.

Next up was what Brands said should be a pay-per-view match. No. 8 Austin DeSanto faced No. 3 Nick Suriano at 133. The two wrestlers did not disappoint.

DeSanto snagged 2 points for stalling, tying it, 3-3. He would go on to score another point for an escape and finish with a takedown with 1.5 seconds left. Suriano gathered a point for riding time, but DeSanto would win 6-4.

Despite the win, DeSanto lost his cool in the heat of the moment for the second week in a row, losing his second point to an unsportsmanlike conduct call, screaming in Suriano’s face.

“I have fight in me, but I don’t need to scream in his face,” DeSanto said. “I don’t need to do that. It’s not cool. I’m just emotional about it, but I need to keep that in check.”

Lee backed his teammate after the match.

“He’s working on it,” Lee said. “I know he’s getting a lot of negative attention for the last two matches. We’re working on it because we love him.”

Nonetheless, the Hawkeyes led 8-0 after the first two matches.

The other featured match of the meet took place at 149 where No. 12 Pat Lugo faced undefeated No. 2 Anthony Ashnault. Heading into the third period, Lugo led 1-0, but Ashnault would score the equalizer off an escape of his own, sending the match into overtime. Ashnault was triumphant in sudden victory, winning 3-1.

Murin, Young, Wilcke, and Warner all recorded decisions. In his second dual meet of the season, Stoll came away with a 10-0 win.

At 165, Marinelli registered the second pin of the night. He found himself with an 8-2 lead with 43.3 left in the first period when he ended the match.

The Hawkeyes will turn around and wrestle Jan. 25 and Jan. 27 against Illinois and Northwestern, respectively.