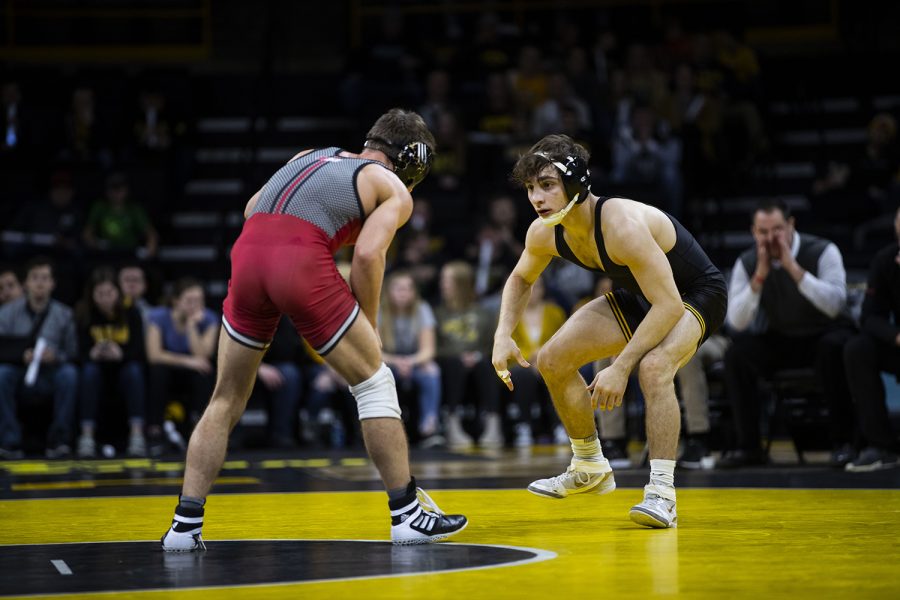 Iowa's No. 8 Austin DeSanto wrestles Rutgers' No. 3 Nick Suriano at 133 during the Iowa/Rutgers wrestling meet at Carver-Hawkeye Arena on Friday, January 18, 2019. DeSantos defeated Suriano, 6-4. The Hawkeyes defeated the Scarlet Knights, 30-6.

Iowa head coach Tom Brands said earlier this week that the Austin DeSanto-Nick Suriano match at 133 pounds should be pay-per-view.

No. 8 DeSanto picked up a 6-4 win over No. 3 Suriano in Carver-Hawkeye on Friday, as Iowa topped Rutgers in dominating fashion, 30-6.

“I’m getting better,” DeSanto said. “This is the place to be. This is a family here and they’re just trying to get us better every day, and it’s working.”

With the hype leading up to the most anticipated match of the dual, it’s no surprise that the Carver crowd of 8,500  was rocking as DeSanto and Suriano went into crunch time.

The battle saw a scoreless first period that was mostly hand-fighting, except for a couple shots toward the end of the clock, but things picked up in the second.

DeSanto started the period on top and things didn’t go his way early, as Suriano escaped in 5 seconds.

Suriano scored a takedown shortly after, but DeSanto managed to find his way onto the scoreboard with an escape before the period ended.

The third period was when things got especially wild.

Starting on the bottom, DeSanto picked up 2 points from Suriano’s stalling calls to tie the match before tallying his point for escaping for a 4-3 lead.

DeSanto beat the buzzer with one final takedown, securing his big win.

“[Desanto’s tempo and motor] is separating him from the field – it’s his best skill,” Iowa head coach Tom Brands said. “And he’s getting better with his other skills, his scoring, his quick in-and-out stuff, his head’s not getting caught underneath, not doing silly stuff as much.

For the second week in a row, though, DeSanto was hit with an unsportsmanlike conduct call, making the final takedown necessary and costing Iowa another point in the team score.

DeSanto said he got dinged for screaming in Suriano’s face after the match before admitting he needs to keep his emotions in check.

Three of Suriano’s six career losses have come from Hawkeyes, as Thomas Gilman, Spencer Lee, and now DeSanto, have all found ways to down the former Nittany Lion and current Scarlet Knight.

Along with helping him keep his emotions in check, DeSanto said earlier this week that he went to Lee and Gilman for advice.

Lee watched the match while cooling down to see if his tips paid off. They did.

“I had to watch it just because Nick Suriano is a great competitor and I know he’s going to come back strong like he always does,” Lee said. “DeSanto knows that. He knows that next time they wrestle, it’s going to be another brawl.”

Outside of the unsportsmanlike calls, it’s clear how much DeSanto has grown on the mat throughout the season.

Since losing to Iowa State’s Austin Gomez on Dec. 1 – his only loss of the season – DeSanto has gone 8-0, won a Midlands title, and toppled three ranked wrestlers, including No. 6 Ethan Lizak of Minnesota on Sunday.

“I’m getting better every single week with guys like Gilman, Murin, Turk, Spencer, Dardanes, everybody, Clark – I’ve been wrestling with all those guys,” DeSanto said. “Those guys are all top-level dudes and they’re beating my butt. I’m getting beat, coming back thinking I beat one of those guys, they’re coming back thinking with a new plan, and that’s how we all grow.”