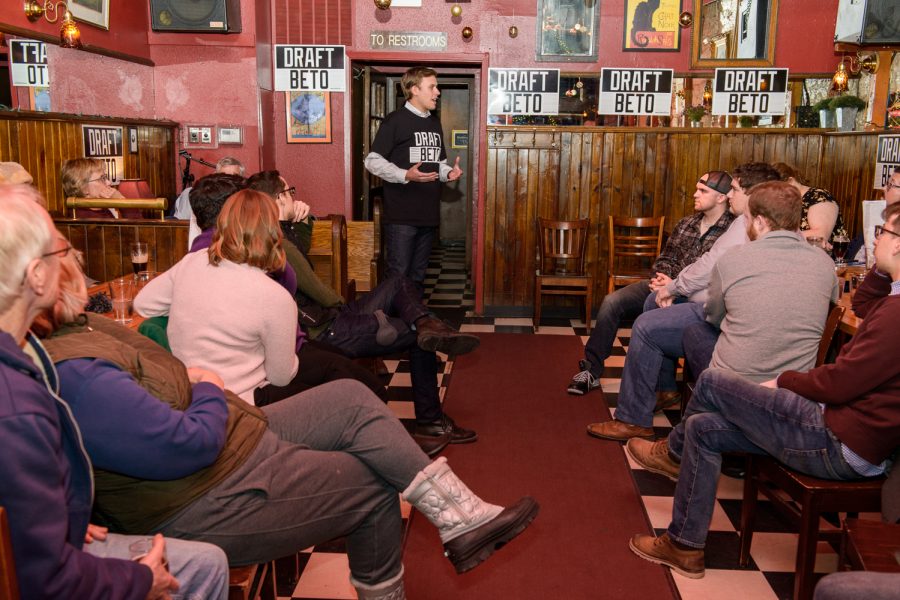 Draft Beto organizer Will Heberberich speaks during a meeting of the group at the Sanctuary Pub in Iowa City on Wednesday, January 16, 2019. Draft Beto is a group seeking to build grassroots support for former Rep. Beto O'Rourke, D-Texas. O'Rourke has not announced a campaign for president in 2020.

Volunteer sheets, posters, and campaign tee shirts are a usual sight for a political campaign event in Iowa City ahead of the caucuses, but the scene at Sanctuary Pub Wednesday evening was missing one factor generally deemed a necessity— a candidate.

Wednesday’s event, organized by University of Iowa law student Paul Esker, rallied Iowa City area Democrats to support former Texas Rep. and Democratic nominee for the 2018 Texas Senate race Robert “Beto” O’Rourke. The event is part of a national movement to generate grassroots support across the country if he decides to run.

“We don’t know what’s going to happen in the next year and what [Draft Beto 2020 co-chair Will Herberich] is focused on and what I’m excited about is getting people into this race that are going to help us have the conversation we need to have in this country about where we’re going and how we’re going to take our country back from Donald Trump,” Esker said at the event.

Wednesday was the first time Draft Beto 2020, an organization that aims to build grassroots support for O’Rourke, held an event in Iowa, on Thursday the organization will travel to Des Moines for a similar event.

“I definitely think if he got into the race he’d find a lot of support here in Iowa City and throughout Iowa,” UI law student Sam Gray said.

Gray added that he believed the support from the Draft Beto movement coupled with the network of donors O’Rourke built during the Senate race will put him in a unique position for the primary if he decides to run.

There are two different organizations with the Draft Beto mission— Draft Beto 2020 and Draft Beto, an organization which seeks to raise $1 million for his campaign should he decide to run. Draft Beto 2020 focuses on building support through encouraging Democrats to host meetings, connect with people in their social circles, attend community events, and phone bank supporters in their area.

“Our sincere hope is that sometime in the next month to two months Beto decides he’s running for president,” Herberich said during the event. “And in a really crowded field, we think that we can’t wait to start organizing until he gets in the race.”

Herberich co-founded Draft Beto 2020 shortly after the election and has garnered national support, noting that the organization gained thousands of volunteers in the days following its establishment.

O’Rourke made national headlines in the midterm election where he narrowly lost to Republican incumbent Ted Cruz by 2.6 percent, or approximately 200,000 votes. During this campaign he visited all of Texas’ 254 counties and raised more than $80 million in campaign contributions. Iowans donated approximately $18,000 to his campaign, according to Federal Election Commission data.

O’Rourke, an El Paso native, was first elected to the U.S. House of Representatives in 2012 where he served up until the new session. In October, he announced he would not be seeking the presidency during a CNN town hall in McAllen Texas, but later changed his position in late November during a town hall in El Paso to not ruling out a run for the Oval Office.

“I think he’s got ideas that definitely need to be part of this conversation and I’m just excited to see who comes out on top over the next year,” Esker said.