Is there gold beneath the plains of northeast Iowa? Probably not, but UI researchers are trying to find the age of rock samples to see what minerals are below ground in the mysterious Northeast Iowa Intrusive Complex. 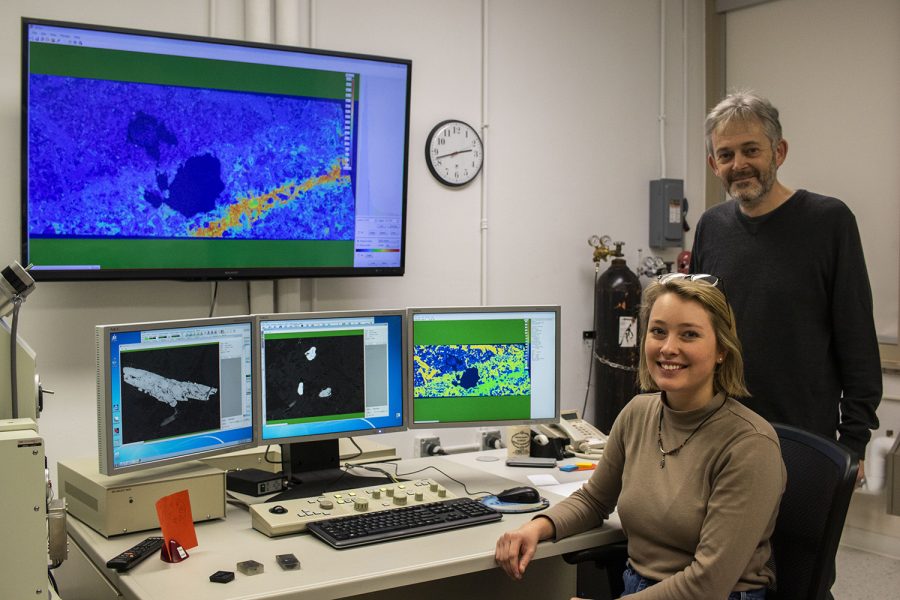 At some point around 1 billion years ago, a titanic rift in the Earth’s crust threatened to create a new ocean. It thrust magma upwards across various parallel fractures, some of which would eventually settle to form what is now called the Northeast Iowa Intrusive Complex.

Researchers at the U.S. Geological Survey, in conjunction with the Iowa Geological Survey, have amped up efforts in recent years to analyze what this formation is. However, in order to accomplish that, they first have to determine how old it might be.

Ryan Clark, an IGS geologist, the complex stretches for more than 6,000 square miles and underlies 10 counties, with offshoots stretching into two more. Aeromagnetic testing conducted in the 1960s showed the general shape and size of the formation, but technology then didn’t allow for high-resolution imaging.

In one of the offshoots, located in Clayton County, a drilling operation uncovered a lone fragment of the complex 2,000 feet under ground, a piece of rock known as the Osborne Core.

Now, half a century later, UI researchers, including geochemistry Professor David Peate and third-year geology student Allison Kusick, have the task of analyzing mineral composition and abundance to discover the core’s age.

“If you’re trying to date [the core], you need crystals that incorporate elements in certain ways,” Peate said.

Peate and Kusick used an electron microscope and X-ray imagery to create detailed maps of crystals in their fragments of the Osborne Core. They tested for zirconium-rich minerals, measuring in microns to find the size and number of elements in the samples they have.

A similar formation in Minnesota called the Duluth Complex has been analyzed to be approximately 1.1 billion years old, and by looking at the decay of uranium into lead, Peate and Kusick can test how the Northeast Iowa Intrusive Complex compares.

Unlike the underground Northeast Complex, the Duluth Complex is largely at or near the surface because of glacial activity and thin topsoil.

“If they’re the same age, there’s a good chance similar mineralization as to what happened up there happened here as well,” Peate said.

Clark said, as in Minnesota, copper, nickel, sulfite, and platinum group elements, as well as possible precious metals, might be under the Northeast Iowa Complex, and it has the potential to bring an economic boon in the future.

“The Duluth Complex is generating a lot of revenue, not only for the mineral industry but for the state …” Clark said. “If something like that were to happen here in Iowa, it would be a major economic benefit. It could be decades down the line, if at all.”

Peate said his team is waiting for the government shutdown to end so they can resume correspondence with USGS and see if more fragments can be recovered.

The primary goal of the research, however, is not economic. Because the Osborne Core was found in an offshoot of the complex, Clark said, there’s no guarantee the main body would even have minerals similar to those found in the core.

“Our purpose is to understand what we have here and, secondarily, if someday we need to use those metals, we’ll know they’re here,” Kusick said.