Allen read from their latest book, which explores their uncle's diagnosis of schizophrenia. 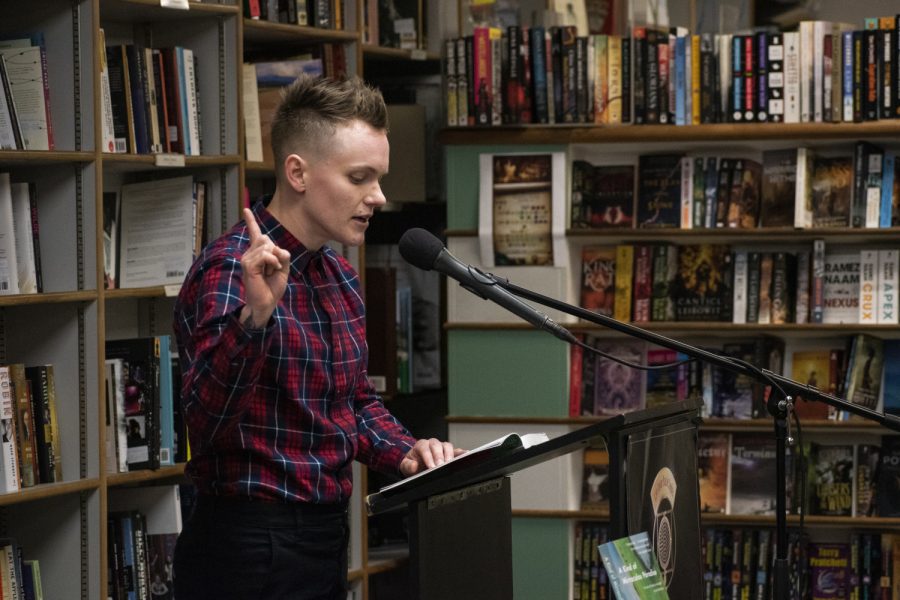 Sandy Allen stood before the quiet crowd in Prairie Lights, holding one finger up and dropping their voice, imitating an uncle and quoting him.

“ ’87 Debbie had a little girl she named Sandra; Elvis had died in ’87 but I really never thought too much of him; also in ’88 Bush was elected president: in ’89 the Berlin Wall collapsed.”

Allen read excerpts from the book A Kind of Mirraculas Paradise: A True Story about Schizophrenia at Prairie Lights on Jan. 15.

Allen’s book is the result of years of dialogue between writing and Uncle Bob’s 60-page manuscript detailing his experiences as someone diagnosed with schizophrenia. The book is inventive and touching, with direct quotes from Bob’s manuscript in typewriter font that interject Allen’s “normal” account of the story of his life and death.

Allen did not want the author’s part of the story to be considered any more “normal” than Bob’s part. Through the book and through conversations about mental health, Allen seeks to challenge the labels given to people by society. Never does Allen discredit something the uncle said because of his diagnosis.

“Why does Bob’s life have to be a tragedy?” Allen said. “I’m inspired by Bob to end normalcy. We place mental illness as the problem within the individual, [when really it’s] how society sees that individual. We need to start seeing it in a way that places emphasis on the problem of society, not the individual. I hope to challenge some of the preconceptions about what a story of schizophrenia has to be.”

While Allen spoke mainly of the uncle’s experience with schizophrenia, the author also advocated for destigmatizing labels of all kinds.

“I am, myself, gender-nonconforming and am nonbinary,” Allen said. “I’m out, and I’m interested in speaking out about the fact of people like me. There is a relationship between my coming out and this book. I’m writing about when people are given labels that very much affect their lives, and I myself have my own labels.”

Allen made it clear that this mindset could be applied to any label someone is assigned. Allen also emphasized that mental health should be a priority for all people, regardless of whether they have experienced a mental-health crisis.

“I think it’s important that those of us who don’t have a stake already in these conversations should better educate ourselves about some of the basics,” Allen said. “Too often, people only start to begin to learn about [mental health] when it’s too late. We need to ask ourselves how we can better help people and how we can stop viewing people as ‘crazy.’ ”