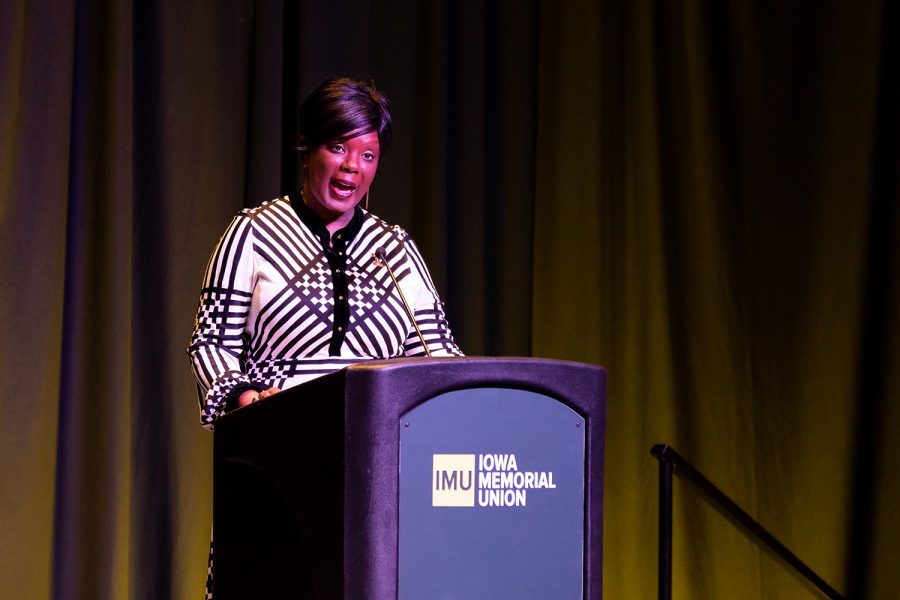 UI Vice President for Student Life Melissa Shivers speaks at the Chief Diversity Office’s 2019 Update on Diversity, Equity, and Inclusion in the IMU on Wednesday, Jan. 16, 2019.

The University of Iowa is continuing to focus on improving the campus climate to support historically marginalized populations on campus, UI Interim Chief Diversity Officer and Vice President for Student Life Melissa Shivers shared in a Wednesday presentation.

The annual update regarding diversity, equity, and inclusion at the UI was given in the IMU on Wednesday and was open to all UI faculty, staff, and students with dozens of people in attendance.

In the update, Shivers shared accomplishments from her time as UI interim chief diversity officer, which began in May of 2018.

The Chief Diversity Office outlined its five main priorities for the upcoming year:

Shivers commended the diversity efforts from initiatives such as the Trans Inclusivity Task Force, the recent decision to move the Student Disability Services office from the bottom floor of Burge, and the Hawkeye Meal Share program — which has provided more than 1,300 meals since its inception in the spring of 2018.

Shivers also discussed the strides the university has made on the national and state levels.

“Just recently, [UI Health Care] was rated 24th in terms of best employers for diversity in Forbes,” she said. “The UI was also awarded 4 out of 5 stars for LGBT friendliness in the state of Iowa.”

UI President Bruce Harreld, who spoke at the event as well, congratulated Shivers’ work over the past year and emphasized the importance of the university’s consistency when it comes to methods of increasing diversity. Since 1847, the “what” has changed a lot, but the “how” remains the same, he said.

“There’s a lot of research out there that says the more homogenous a group of teens are, the worse they perform, the more diverse they are, the more they challenge each other and the better they perform,” Harreld said. “This issue is not just about the right thing to do, but it’s critically important for our success going forward.”

Shivers mentioned the paradigm shift that will occur as the office furthers expands diversity efforts to include equity and inclusion as well.

The office will also change its name to the “Division of Diversity, Equity, and Inclusion” to build a more inclusive and coordinated effort across colleges, she said — a change which will occur as the office is set to move into one unified space in the University Capitol Center.

Statistics shown during the update revealed that underrepresented minority students, despite increasing enrollment over the last 10 years, are still lacking in terms of graduation and retention rates in comparison to their white cohorts.

To further increase the efforts of the second priority outlined by the Chief Diversity Office, the UI became a member of the American Talent Initiative in the fall of 2018. The goal of that initiative is to enroll and graduate 50,000 more high-achieving, low-income students by 2025.

Shivers showed concern for the percentage of underrepresented minorities in UI staff and faculty, which each rest at 7.6 percent for fiscal 2019. The UI is not comfortable with that number, she said.

“I think the recruitment and retention of underrepresented minority staff needs to be a priority, and I say that because we have been losing a lot of staff members of color,” UISG Sen. Alexia Sánchez said. “That directly impacts students every day.”