Iowa swimming and diving ready to open second half after break

The Iowa swimming and diving team is gearing up to host its first home meet of the year. 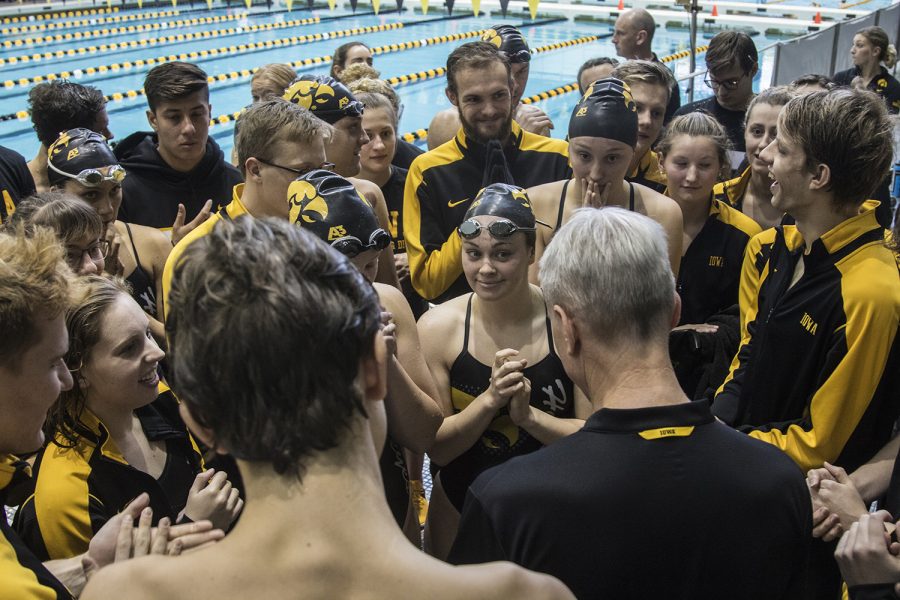 The Iowa swim team huddles during a swim meet where Iowa hosted the University of Denver and University of Michigan at the Campus Recreation and Wellness Center on Saturday, November 3, 2018.

Iowa swimming and diving is set to host its first meet this year on Saturday.

The Hawkeye squads have waited more than a month for the break to end, though they do not feel as if they had much or any break.

Both the men’s and women’s teams traveled to Florida over break to train for a week. After they returned from the trip, some of them went home for about a week for the holidays, and then they met in Iowa City before the new year began.

During the time here before most students returned, the Hawkeyes had the opportunity to bond and work on things they do not have time for in the regular season.

“I feel great about the team, but we’re still working on a lot of things,” head coach Marc Long said. “We were able to get the volume up in training, as there were really no other commitments while they were here because they didn’t have classes and things like that. We were also able to try different things in training that take a little bit more time.”

Both the men and women were set to start the new year swimming last weekend, but the men’s home meet against Notre Dame was canceled because of an illness going around. The women swam on Jan. 11  in Champaign, Illinois.

No Hawkeye swam away with gold, but they managed to have had enough good performances to take a victory. The women defeated Big Ten foe Illinois in a close battle, 157-143, but were not able to keep up with No. 12 Notre Dame, 204-95.

“It’s always good to take home a victory against a Big Ten opponent; Illinois is a great team, and I know that we were happy with the results,” sophomore Sage Ohlensehlen said. “I felt good coming back onto that first meet, but I still felt a little worn down from the training. I know that as we are coming out of that, we are getting better and better and mixing it in with a little bit more rest, so I think everyone will be more prepared this week than last week.”

The women had no standout performer or performances during their meet, but they had a début. Freshman Lauren McDougall made her first appearance as a Hawkeye and competed in four events. The Sydney native competed in two individual events, in which she placed second in the 100 free (52.05) and fifth in the 200 free (1:53.13). She was also part of the second-place 400-free relay and fifth-place 200-medley relay.

The Hawkeyes will take on Wisconsin and Northwestern on Saturday for Senior Day.

The meet will give the Hawkeyes a taste of what is to come, because they will face both teams in the Big Ten meet. The Wisconsin women are ranked No. 14 nationally, and the men sit at No. 24.

“Wisconsin dominated us last year in our middle-distance relay last year at Big Tens,” junior Will Scott said. “It was a huge downside for us as a team. I think our middle-distance group is going to be trying their best, and I believe they are going to succeed at beating back the Badgers. Northwestern has some great stroke swimmers, so I expect our stroke guys will step up, too.”

The meet will start at 11 a.m. Saturday in the Campus Recreation & Wellness Center.