Ahead of one of the biggest meets of the year, the track team seeks to improve and break some records in the process. 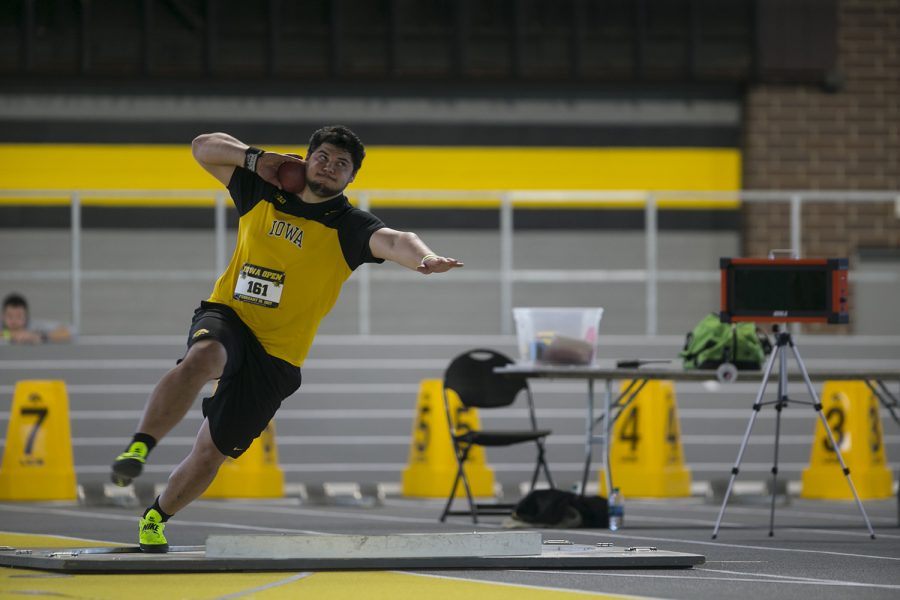 Iowa’s Reno Tuufuli competes during an event in the Iowa Recreation building on Saturday, Feb. 18, 2017.

The Hawkeye men’s track and field team is getting ready for its third-straight home meet after a relatively successful performance at the Hawkeye Invitational on Jan. 11-12.

Iowa Director of Track and Field Joey Woody said he was excited about seeing the team compete against a variety of talented squads in the team’s Wieczorek Invitational.

“It’s exciting because we haven’t really competed with everybody yet — we had some of our athletes who didn’t compete last weekend [at the Hawkeye Invitational],” Woody said. “We’ve been training them really hard, so it is exciting for me just to be able to see them compete.”

He said he was confident that the athletes are both mentally and physically prepared for one of the biggest meets of the year.

“I know that they are ready to compete; they are ready to go,” Woody said. “They have had some great training up to this point, so now is time to go head-to-head against some of the best competition in the country and leave our best effort out on the track.”

Woody is fond of saying athletes and teams never stay the same — they either get better or get worse.  This weekend, he expects to see signs of improvement in all the events.

“I know that I’m going to see some improvement across all the different event areas,” Woody said. “Along with that, I just want to see people remain healthy and continue to progress through the season.”

Athletes use rest to their advantage

Some of Iowa’s top talent was held out of the previous meet to ensure they would be ready to compete well this week.

All-American thrower Reno Tuufuli believes the rest will serve him well this weekend.

“It will be really exciting to be able to get back out there and compete,” he said. “I feel well-rested and ready to go out and compete against some of the best in the country.  It should be a lot of fun, and I’m really looking forward to it.”

“I feel like the rest has helped me out a lot,” he said. “ I’m well-rested, and I don’t have a lot of races under my belt, so I can go into the meet without any soreness or any tiredness. I’ll be going into the meet fresh, knowing I can go out there and run a fast time.”

Rest is not the only reason Harris feels he will run fast times this weekend — he also wants to break teammate and All-American Antonio Woodard’s record in the 300 meters.

In the first meet of the season, Woodard broke the facility record in the 300 (32.89). Harris is pumped to challenge that  time.

The Wieczorek Invitational will take place Friday and Saturday in the Rec Building.