Personal records propel Hawkeyes to successful start to 2019 at the Hawkeye Invitational. 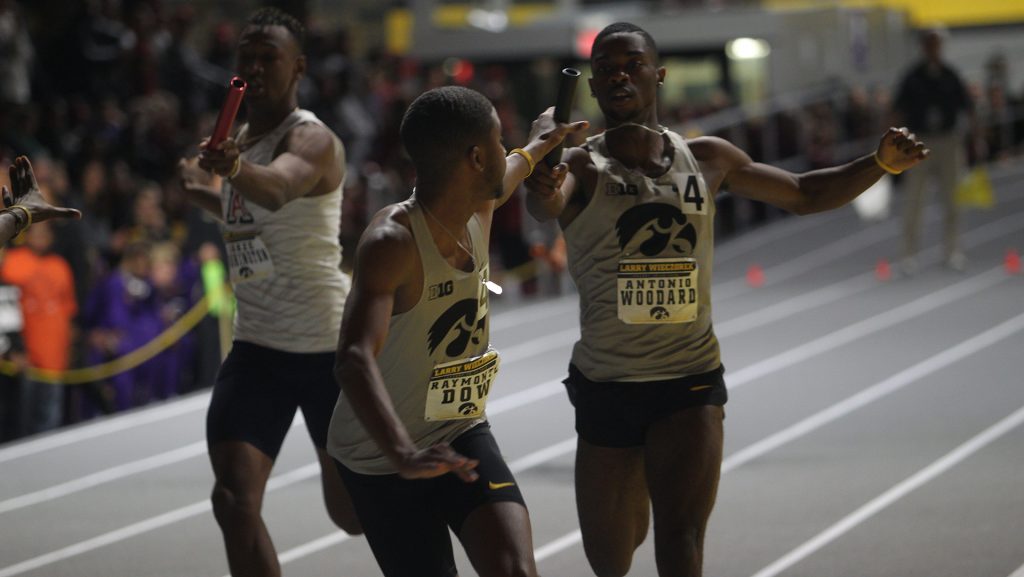 Antonio Woodward and Raymonte Dow make an exchange in the 4x400 meter relay during the Larry Wieczorek Invitational meet in Iowa City, Iowa; Saturday Jan. 20, 2018. Their relay team finished second in the heat.

The Iowa men’s track/field team was in action for the first time in 2019 in the Hawkeye Invitational on Jan. 11-12 in the Rec Building.

No male athletes for Iowa won an event at the invitational, but by no means should the event be considered unsuccessful.

“We already had our first meet, but I thought this was a great January opener,” Iowa Director of Track and Field Joey Woody said. “We had some great performances.”

Among them were the five male athletes who set personal records over the weekend.

McConico, who won his preliminary race and finished second in the finals, was particularly pleased with his performance.

“I felt really good about my performance today; I had a slight blunder on hurdle four in the finals, but I was still able to finish with a good time,” McConico said. “It has been reassuring for me to get the times I want to run more consistently this year compared to last year.”

“The men’s hurdles came out and did great today — Jaylan had an outstanding preliminary race,” Woody said. “He pressed a little bit in the final, and if he had done a little bit better, I think he would be leading the nation right now. It was definitely a good start to the season for him, and I am excited that he is a part of our program. It was fun to see.”

The invitational came a month after the Jimmy Grant Invitational, the team’s first meet of the season. Junior All-American Collin Hofacker thought the team did an admirable job in keeping fit and staying prepared during the long break.

“We had to go home for winter break, obviously. Everyone had workouts sent to them, and everyone got the job done and did their workouts at home,” Hofacker said. “Doing that helped us be able to come out and perform the way we did today.”

Hofacker finished second in the 200 meters.

Iowa was able to enjoy success despite several of the team’s best athletes being held out of the meet to rest. All-Americans DeJuan Frye, Mar’Yea Harris, and Reno Tuufuli, among others, did not participate in order to prepare for next weekend’s Wieczorek Invitational, one of the biggest meets of the year.

Woody wants to take advantage of that rest, as well as the solid performances showcased last weekend, heading into the next meet.

“Obviously, this meet was a great step in the right direction, but the energy next week will be at an even higher level,” Woody said. “We will go up against some of the best teams in the country and, obviously, some of the best in the Big Ten. The energy in the building is going to be crazy, so that in and of itself is going to motivate the athletes to take it to the next level.”

The Wieczorek Invitational will take place at the Rec Building on Jan. 18-19.