Entering the thick of the 2018-19 season, Iowa wrestling came out of the tunnel ready to dominate a Big Ten rival — and did. 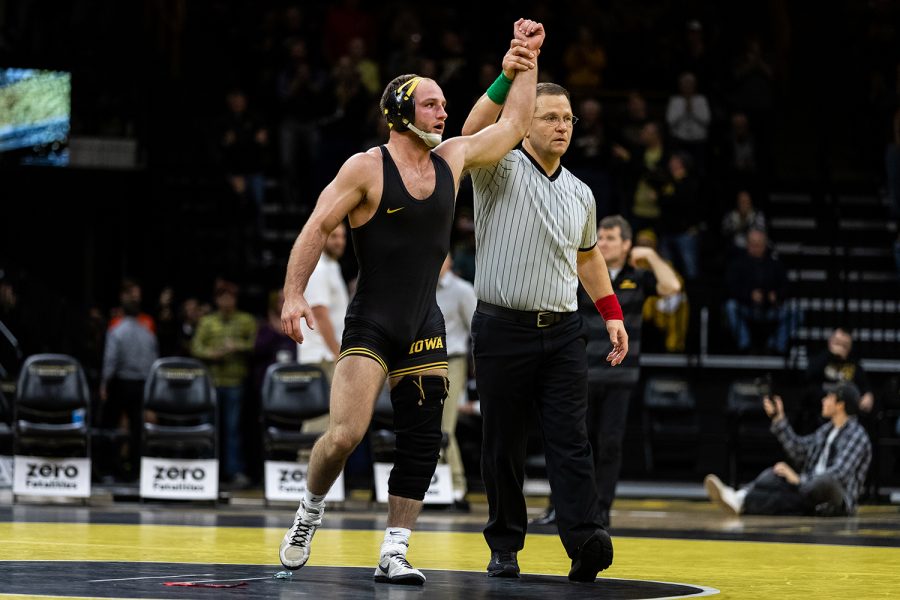 After taking the team title at the Midlands, No. 3 Iowa traveled into Big Ten enemy territory on Sunday for the first time this season and dominated No. 8 Minnesota, 24-10.

Iowa started the meet jumping out to the lead. No. 5 Kaleb Young took a 7-1 decision over No. 9 Steve Bleise, and Midlands champion No. 2 Alex Marinelli added bonus points with a fall in 5:55.

“During the week, [head coach] Tom [Brands] told me we need bonus points,” Marinelli said in a release. “That’s all I needed to know. We needed it, and I got the pin.”

No. 11 Devin Skatzka tallied the first Minnesota points, topping Mitch Bowman in an 11-9 decision at 174. Iowa took those points right back with a 9-2 decision by No. 14 Cash Wilcke.

No. 6 Jacob Warner continued Iowa’s dominance to end the first half of the dual. He hopped out to an early lead, but as the match went on, Dylan Anderson competed. The decision ended in Warner’s favor, 9-4.

In the first half, Iowa’s focus on wrestling seven minutes paid off. Young’s match started slowly, but he was able to collect points as the match went on. Warner’s fatigue showed during his bout, but instead of letting up, he pushed himself to wrestle hard through the third period.

At heavyweight after the break, freshman Connor Corbin stepped onto the mat in place of Sam Stoll and Aaron Costello to face the No. 2 heavyweight in the country, Gable Steveson.

Steveson took the advantage in the second half with 2 takedowns against Corbin’s single escape. By the end of the first period, Steveson’s lead was up to 6-1 on 2 stalling warnings for Corbin.

In his first major dual appearance on the road, Corbin held Steveson to a 12-3 major decision and 4 team points.

Back at the top of the lineup at 125, No. 2 Spencer Lee took the early points in his first match since finishing runner-up at the Midlands Championships.

Lee’s early takedown was tacked on by [2 points] for the 4-0 decision against No. 6 Sean Russell. Russell fought back against Lee, but each time Lee out-wrestled him to hold the shutout.

No. 10 Austin DeSanto took down No. 7 Ethan Lizak by decision thanks to 2 early takedowns and late points. Following the match, Iowa was penalized 1 team point for unsportsmanlike actions by DeSanto, but the 20-7 score was enough for a dual win with only two weights left.

Minnesota had the advantage in another match with No. 6 Mitch McKee on the mat versus No. 15 Max Murin. Early in the third period, Murin came within 1 point, but almost immediately, McKee scored another takedown for a 5-2 lead.

Down 5-3 in the final 10 seconds of the match, Murin was close to a takedown to send the match past the third period but was unable to finish it off before time expired.

No. 12 Pat Lugo finished off the match for Iowa with dominance. He added to a takedown with back-to-back near falls to grab a 10-0 lead in the second period. That was enough for the 11-0 major decision.

Iowa is now 2-0 in Big Ten action going into the heart of the season.