Helton: 20 Out of 20: Iowa is getting crowded fast. Can Kamala Harris stand out?

The California senator’s time in the justice system could be her best argument to get to the Oval Office. 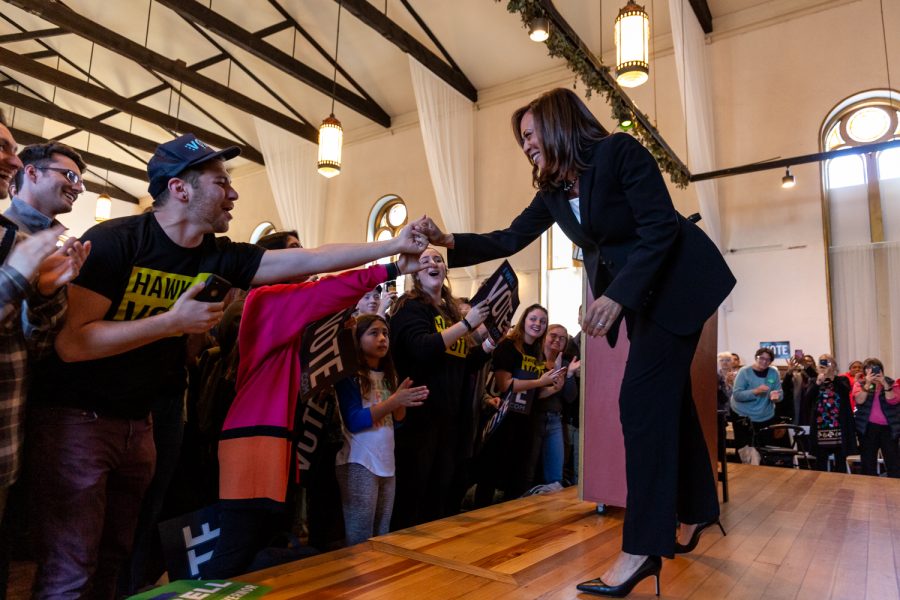 Sen. Kamala Harris (D-Calif.) shakes hands with an attendee at a rally at Old Brick in Iowa City on Tuesday, Oct. 23, 2018

Most of us have spent our winter break relaxing, visiting family, and drinking hot chocolate. But most of us aren’t running for president of the United States. Over the break, Democrats from all over the country have announced their bids for the party’s challenger to the incumbent president. Former Housing Secretary Julián Castro and Hawaii Rep. Tulsi Gabbard have joined other minor Democratic hopefuls, but Massachusetts Sen. Elizabeth Warren and California Sen. Kamala Harris made the real 2020 news.

RELATED: Helton: 20 out of 20: Elizabeth Warren, champion of Women’s Marchers?

I’ve already discussed Warren in 20 out of 20 in The Daily Iowan, so now it’s time to discuss another candidate lauded as one of the many favorites, Kamala Harris.

It’s finally that time in the cycle where speculation starts becoming reality. Yeah, I know we’re more than two years away from the next presidential inauguration, but if potential candidates are acting like real candidates, we should talk about them. And Harris is one of those candidates, as sources close to the first-term California senator told San Francisco radio station KCBS.

Although she hasn’t officially announced — she’ll probably announce on or around MLK Day, according to KCBS — it’s accepted that she has made up her mind in favor of running.

The focus has shifted from “Who’s running?” to “Who’s winning?” in the massively long presidential-nomination process, and it’s far too early to say who has the upper hand. I called Harris “one of the many favorites” for a reason. With so many Democratic contenders in the mix, the party isn’t ready to line up behind one, two, or even five top choices yet. That being said, Harris certainly has better odds than others who are technically running for president such as little-known Maryland Rep. John Delaney.

RELATED: Helton: 2020: Will Cory Booker’s better angels fly him to the White House?

The better question now is “What’s her path to the nomination?” What factions of the party would be Harris’ targets? As both a woman and mixed-race American, she has some natural appeal to groups gaining power in left-leaning circles. But — unlike the first nominee of color, Barack Obama or the first female nominee, Hillary Clinton — there is more than one person of color and more than one woman running for the Democratic nomination. In fact, the aforementioned candidate Gabbard fits both of those categories.

Harris may look to her time in the justice system to stand out from all the other politicians flooding Iowa. In her new pre-campaign book, The Truths We Hold, she identifies as a “progressive prosecutor” to describe her time as attorney general of California and district attorney of San Francisco. Someone experienced in law and justice might appeal to Democrats looking for a fighter to face a Republican president constantly fighting legal battles.

Could she beat Donald Trump?

Personal electability matters in every presidential race. However, a lot of what determines the outcome are the circumstances surrounding Election Day, and that’s especially true in 2020.

In the scenario where President Trump is substantially impaired by Special Counsel Robert Mueller’s Russia investigation or some other legal problems, Harris’ reputation as a justice leader will do twice the damage.

But if Trump manages to go on mostly unharmed, as he has largely done up to this point, then Harris could come across as just another coastal liberal elite without much to offer, especially in the Rust Belt states that proved pivotal in the 2016 election.

Harris’ path to the White House runs through the courthouse. It’s just a matter of how well she can slam the gavel.