In his first career start, Ryan Kriener stood out for the Hawkeyes and Luka Garza made his return against Nebraska on Sunday. 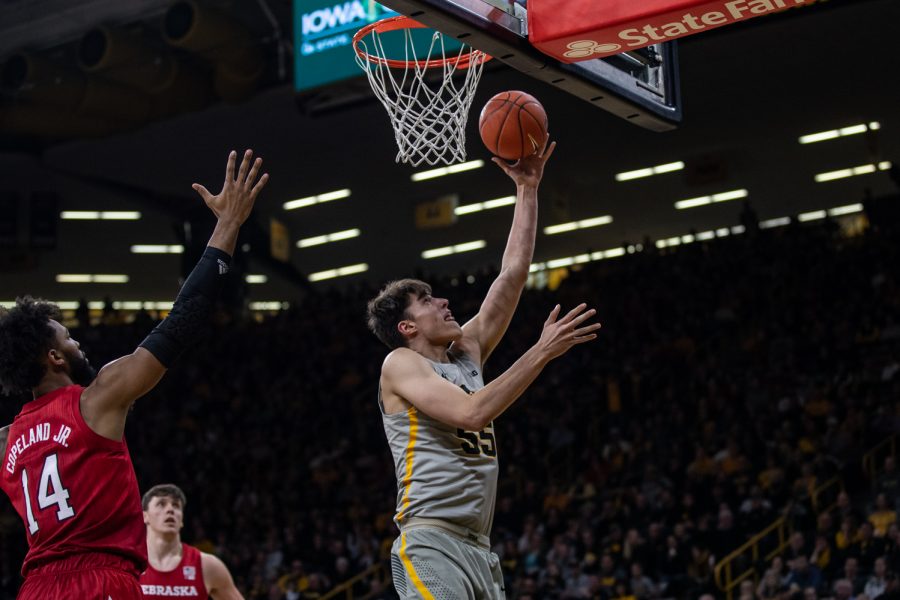 Iowa forward Luka Garza lays the ball up during Iowa's game against Nebraska at Carver-Hawkeye Arena on Sunday, January 6, 2019. The Hawkeyes defeated the Cornhuskers 93-84.

Iowa men’s basketball achieved its first Big Ten win of the season on Sunday afternoon against the No. 24 Nebraska Huskers.

No. 25 Iowa won, 93-84, and Jordan Bohannon had quite the second half after only scoring a last-second 3-pointer in the first. Bohannon finished the game with a season-high 25 points (15 points coming from three pointers) and 5 assists.

Bohannon said the buzzer beater in the first gave him momentum going into the second half.

“It was a big shot to get some momentum going into the second half. It’s nice to see one of those shots go,” he said. “When you make one, it makes the hoop look a little bigger.”

“It was great to see Moss in particular attack that defense. I’m really proud of him. He had a terrific game today,” Iowa head coach Fran McCaffery said.

However, it was Ryan Kriener who stood out in his first career start for the Hawkeyes. The forward had 14 points and 3 blocks in a solid defensive performance.

Kriener started in place of Luka Garza, who has been dealing with an injury the past couple of games. Kriener scored the first points of the game, draining a 3-point shot on contest’s opening posession.

“I told the other guys, I had some jitters coming into the game with my first start,” Kriener said. “That first 3 washed all the jitters away.”

Though he didn’t start, Garza did get a few minutes in the first half and was effective, scoring 8 points in his first game back since Dec. 18 against Western Carolina.

“It’s great to see him with a smile on his face again,” said McCaffery. “He’s not 100 percent by any means, but he’s getting closer. I just felt like I’d give him a chance today. He worked too hard to get back. Kriener was playing so well, I considered not playing him but I just felt like, you know what, this kid is chomping at the bits and can’t wait to get in the game so let’s just see what he does.”

Kriener and Garza were both happy with each other’s performances Sunday.

“Me and Luka go at each other in practice every day, but we are also each other’s biggest supporters. I was really happy to see him out there, doing his thing again,” Kriener said.

Garza echoed that statement, but also added that he’s not surprised one bit by Kriener’s performance, as he’s a handful in practice.

“I was so happy for him. He’s one of those guys that is so tough to guard in practice. He’s always confident in going through his moves and playing like that. He has no hesitation,” Garza said.

Iowa’s defense showed improvement from the previous three conference games this season. The Hawkeyes held the Huskers to 46.2 percent shooting from the field, while shooting 45.8 percent themselves.

“We did a really good job at marking guys and making them take tough shots,” Bohannon said.

The Huskers took quite a lot of shots from deep (23) but only made four attempts from behind the arc. Nebraska head coach Tim Miles said the team struggled to find looks.

“I thought we had some good looks but not enough,” Miles said. “We had worked in practice with our playmakers punching gaps. We just didn’t get it in there enough. I didn’t love our zone attack.”

Iowa plays at Northwestern on Wednesday in its next Big Ten matchup.