With momentum changing hands almost by the minute, Iowa finally took control in the second half in its Outback Bowl victory, 27-22. 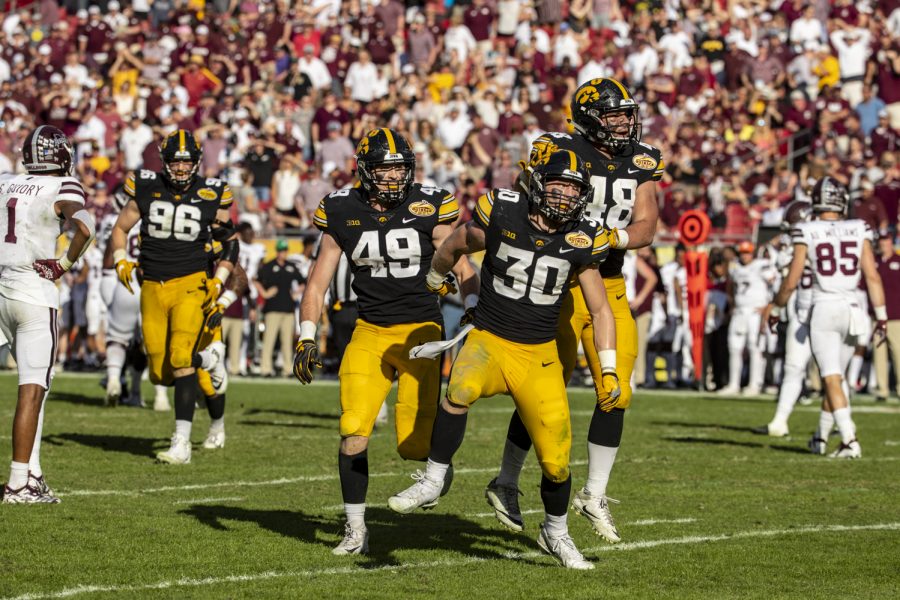 Iowa safety Jake Gervase celebrates after breaking up a pass to seal Iowa's victory during the Outback Bowl game between Iowa and Mississippi State at Raymond James Stadium in Tampa, Florida on Tuesday, January 1, 2019. The Hawkeyes defeated the Bulldogs 27-22.

TAMPA, Fla. – The momentum pendulum swung both ways for nearly the entire 60 minutes of action, but when the final whistle blew, it was Iowa (9-4) coming out on top over No. 18 Mississippi State (8-5) in the 2019 Outback Bowl.

What started out as a game where Iowa had negative yardage after the first quarter quickly turned in the Hawkeyes’ favor with a 75-yard touchdown pass from Nate Stanley to Outback Bowl MVP Nick Easley.

Iowa went into halftime commanding a 17-6 lead, but Mississippi State quickly erased its deficit in the initial minutes of the third quarter.

Stanley forced a pass into triple coverage, resulting in a near-pick-6. The Bulldogs scored, and on the ensuing kickoff, Ihmir Smith-Marsette fumbled, setting Mississippi State up with excellent field position once again.

“It was the worst possible thing we could have done. Those were two ugly plays, quite frankly,” Iowa head coach Kirk Ferentz said. “It looked like we had started to get a little momentum. We took momentum at the end of the half – we were doing some good things. But it couldn’t have gone any worse. That’s where I think the resilience of our football team really showed. The offensive guys kept playing, they stayed with it, and most importantly the defense really bailed us out.”

The defense stepped up (after allowing 13 points in the third quarter’s first 4 minutes) giving up just a field goal from then on out.

Mississippi State utilized quarterback Nick Fitzgerald in the ground game, and he led the team with 20 carries for 103 yards and a touchdown. But, as the game went on, the Hawkeyes clamped down on the Bulldog run game.

“They had all the interior gaps, plus people off the edge, plus another guy on top of that,” Mississippi State head coach Joe Moorhead said. “There’s only so many things you can do running the ball.”

The Bulldogs became forced to approach their offensive attack with an aerial mindset, and from there, Fitzgerald was in trouble.

The senior quarterback threw a pair of interceptions, including one that went right off a receiver’s hands and into the outstretched arms of senior safety Jake Gervase.

“That was a tough route – a really good pass concept on their part,” Gervase said. “They ran a corner route by their receiver all day, and he went to the corner and broke it to the post. [Amani] Hooker did a good job of getting underneath to make it a tough throw. Could’ve been a touchdown, but he kind of bobbled it. I was in the right place at the right time. I got no complaints.”

Mississippi State had a chance to win at the end of the game, but it was Gervase, once again, there for the pass defense, breaking up the Bulldogs’ last-ditched attempt on fourth down.

Offensively for Iowa, the pass game was working to perfection at times. Stanley completed 21 of his 31 attempts for 214 yards and 3 touchdowns. Easley caught 8 of those passes for 104 yards and a pair of touchdowns.

The ground game, though, was nonexistent. The Hawkeyes ran for -15 yards on 20 attempts. Toren Young was Iowa’s leading rusher with 7 yards on 3 attempts.

“Obviously, that’s not something you script,” center Keegan Render said. “… It wasn’t the prettiest, and it probably was the most unorthodox win I’ve been a part of.”