Hawkeye wrestling has a chance to crown six champions heading into the final session. 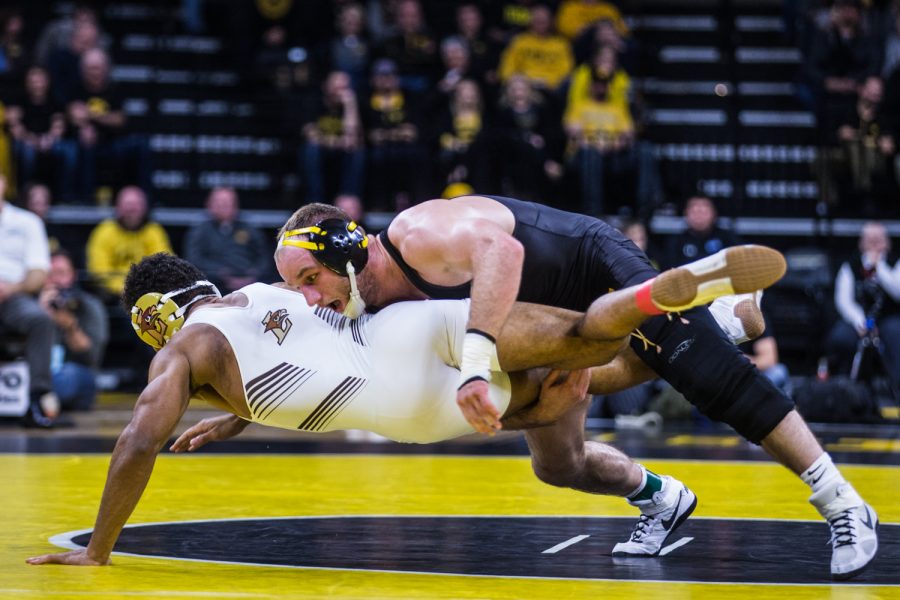 Iowa's Alex Marinelli wrestles Lehigh's Cole Walter during a wrestling dual-meet between Iowa and Lehigh at Carver-Hawkeye Arena on Saturday, Dec. 8, 2018. Marinelli, who is ranked fourth at 165, defeated Walter 20-5, and the Hawkeyes defeated the Mountain Hawks, 28-14.

125-pounder Lee faced Princeton’s Patrick Glory in the quarterfinals. Earlier this season, Lee tallied a technical fall over Glory, winning 18-2. However, this time the two wrestled the whole 7 minutes and Glory got 2 near falls on Lee, 2 points apiece. Yet, Lee was still dominant and won, 12-6. Lee will wrestle second-seeded Sebastian Rivera in the finals.

DeSanto tallied a takedown and a 2-point near fall in his Round of 8 match. With 19 seconds left in the second period, his opponent got his fifth stall warning, resulting in a disqualification.

Murin met unattached Michael Blockhus on the mat. Murin registered 3 takedowns, an escape, and a point for riding time for an 8-0 win.

After ending yesterday with a pin and 3 tech falls, Kaleb Young successful in his quarterfinal match. Young defeated his opponent, 9-2, with 2 takedowns, a reversal, an escape, and points for stalling and riding time. Young will face top-seeded Ryan Deakin of Northwestern in the finals.

All-Americans Marinelli and Joshua Shields battled for a spot in the 165-pound championship match. Marinelli was victorious, winning 4-1, and will see No. 1 seed Evan Wick in the finals.

Wilcke also has the chance to defend a Midlands crown after he beat his opponent, 8-2. The 184-pound match will be between two Iowa schools, as Wilcke faces Northern Iowa’s Drew Foster.

133-pounder Paul Glynn and 197-pounder Jacob Warner will both wrestle for fifth.

After losing to Princeton’s top-seeded Matthew Kolodzik at 149 pounds, Pat Lugo handled Jacori Teemer, 10-3, to find a spot in the third-place match. 157-pounder Jeren Glosser lost his first match of the tournament but has turned around to win eight consecutive matches in the consolation bracket to snag a chance to place third.

First, third, and fifth-place matches will begin at 7 p.m.