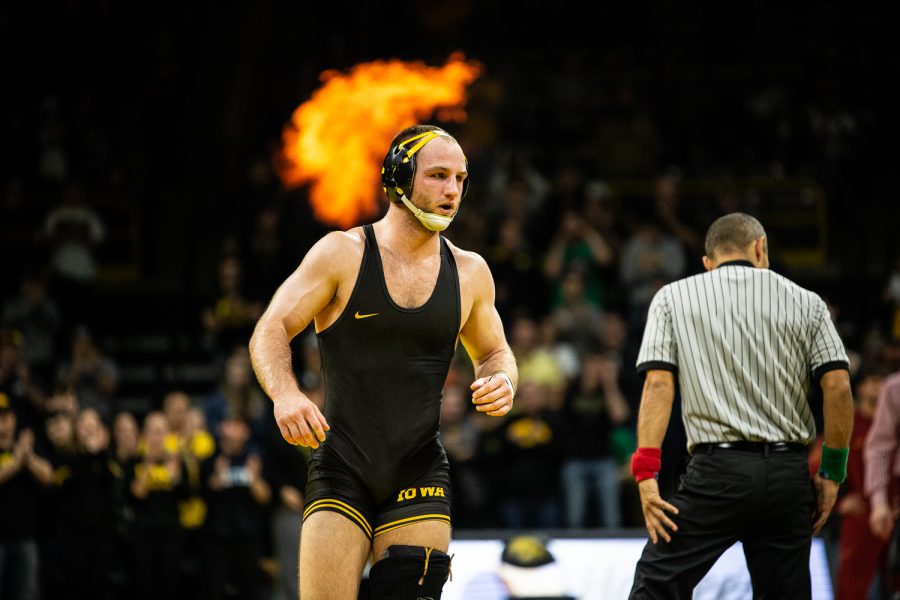 HOFFMAN ESTATES, Ill. – Twelve Iowa wrestlers advanced to the Midlands quarterfinals. Eight found spots in the semifinals. Six wrestled in the finals. But only two – Austin DeSanto and Alex Marinelli – stood at the top of the podium and claimed Midlands titles.

Defending champion Alex Marinelli and Wisconsin All-American Evan Wick competed for the 165-pound title. Marinelli scored 2 takedowns in the first period, and those would be enough to carry him to back-to-back Midlands titles, as he picked up a 4-3 win.

“[My] mindset was just to get to my attacks,” Marinelli said. “I prepared this whole season. I’ve waited a long time for that match. It killed me to lose so many points at the national tournament to him. That match was marked on my calendar for a long time. I’m happy to wrestle at the Midands.”

Although he defended his title, Marinelli said he didn’t show everything that he has to offer.

DeSanto came out hot at 133, scoring 8 points in the first period with 3 takedowns and a 2-point near fall. DeSanto added a reversal, 2 more takedowns, and a point for riding time for a 15-5 victory, earning gold at his first Midlands.

But before DeSanto could reach the top of the podium, he had to endure a tough loss by his teammate.

Rivera found himself on the board first with a takedown. Lee responded with an escape, making the score 2-1 at the end of the first. Rivera pulled away in the next period, tallying 2 more takedowns. After seven minutes on the mat, Rivera completed the upset of top-seeded Lee, 7-3.

Going into the third period, Northern Iowa’s Josh Alber held a 1-point lead over Max Murin. Murin tied it at 1 with an escape, but shortly after, Alber registered a takedown. Murin escaped again, making it 3-2. As Murin scrambled to score a takedown in the last few seconds, Alber gained control and scored 2 more points for a 5-2 decision.

Kaleb Young wrestled top-seeded Ryan Deakin of Northwestern in the 157-pound finals. The score was tied 2-2 with two minutes remaining, but Deakin ruled the third period. Scoring a point for an escape, 2 for a takedown, and a point for riding time, Deakin won, 6-2.

In 2017, Cash Wilcke was the Midlands champion at 197, but he was unable to take that title at 184 this year. Wilcke fell to Northern Iowa’s top-seeded Drew Foster, 3-2, making it the second finals match where a Hawkeye lost to a Panther.

133-pounder Paul Glynn and 197-pounder Jacob Warner both emerged victorious in fifth-place finishes due to medical forfeits. Tony Cassioppi also won his seventh-place match at 285 against a medical forfeit.

Pat Lugo and Jeren Glosser both wrestled for third in the final session of the Midlands tournament. Lugo fell to Sammy Sasso 6-4 in sudden victory, placing 4th at 149. Glosser lost to Zach Hartman 83 in the 157-pound bracket.

The Hawkeyes won their 28th tournment title with ease, posting a score of 184 – 64.5 more than runner-up Northern Iowa.

Iowa will take a two-week break before it wrestles Minnesota on the road on Jan. 13.