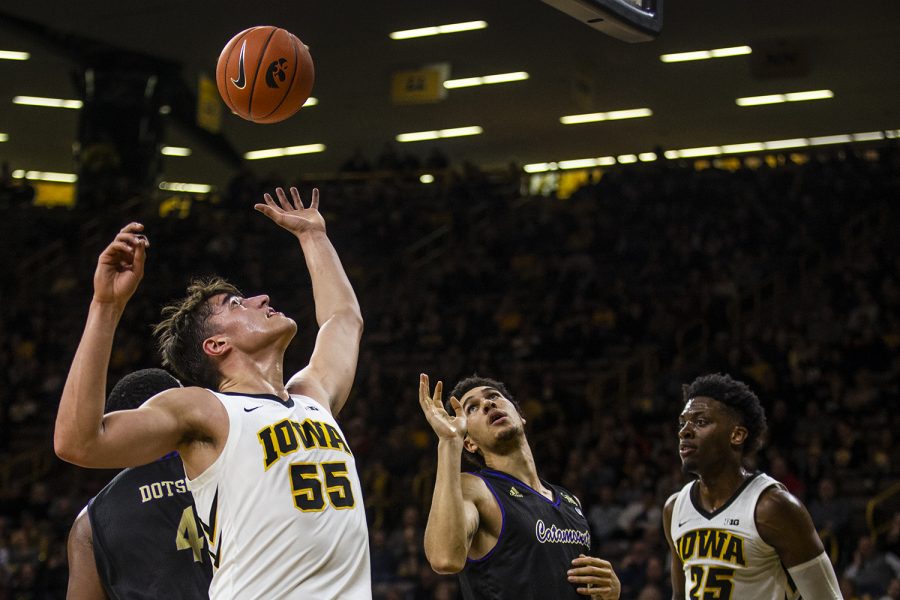 Iowa forward Luka Garza jumps for a rebound during the men's basketball game against Western Carolina at Carver-Hawkeye Arena on Tuesday, December 18, 2018. The Hawkeyes defeated the Catamounts 78-60.

Western Carolina gave a helping hand and a ball or two in No. 23 Iowa’s victory on Tuesday night, racking up 26 turnovers.

“I don’t remember ever going into halftime where a team shot 65 percent, 66 percent from 3, and we were up 19. I don’t think that’s ever happened before, maybe in the history of basketball,” McCaffery said during the post-game press conference.

Iowa also had 8 blocks (4 of them coming from Nicholas Baer) in its defensive performance which also included some solid lockdown play from Jordan Bohannon.

Aside from slippery hands, the Catamounts also lacked depth. The team’s starters scored all but 2 points, while the Hawkeyes had 22 of the team’s 78 points come from the bench.

While he didn’t come off the bench, freshman Joe Wieskamp showed just how comfortable he’s grown in his starting role. Tyler Cook said that the freshman is a go-to player for the Hawkeyes.

“When you have a guy who’s not only smart, but can actually hoop as well as he can, it only makes your team that much better,” Cook said. He’s getting a lot of open shots. He’s another added weapon and another great teammate.”

Cook himself had his way on the court, scoring 18 points and grabbing 5 rebounds. Fellow forward Luka Garza also racked up 15 points and 6 rebounds in a solid performance for the forward.

The two will have a little added weight on their shoulders with the loss of fellow forward Cordell Pemsl. Garza said he feels for his teammate, who will have to sit out the rest of the year due to a season-ending surgery “removing hardware from his knee from a previous surgery.”

However, not all was perfect for the Hawkeyes, as the game went into the second half. Overall shooting percentage was under 50 percent and was only 33.3 percent in the second half.  The Hawks were 11-18 in layups, and the team seemed to lose focus before a broken clipboard from McCaffery and a timeout seemed to clear their heads.

“We had a little lapse,” Garza said. “There was a two minute stretch. They got the rebound off the free throw and got a couple 3’s. Coach really got mad at us during the timeout and we had to refocus right there. I think we did really well the rest of the game. But at that point, he’s not really coaching us to win the game anymore. You know, we pretty much got that down. Now it’s just trying to improve and get better and we’re going to go out there and give it our all.”

The victory improved the Hawkeye’s record to 9-2, and the team faces Savannah State on Saturday in Carver.