Eight members pay homage to an iconic band that combined elements of rock and jazz, among other genres. 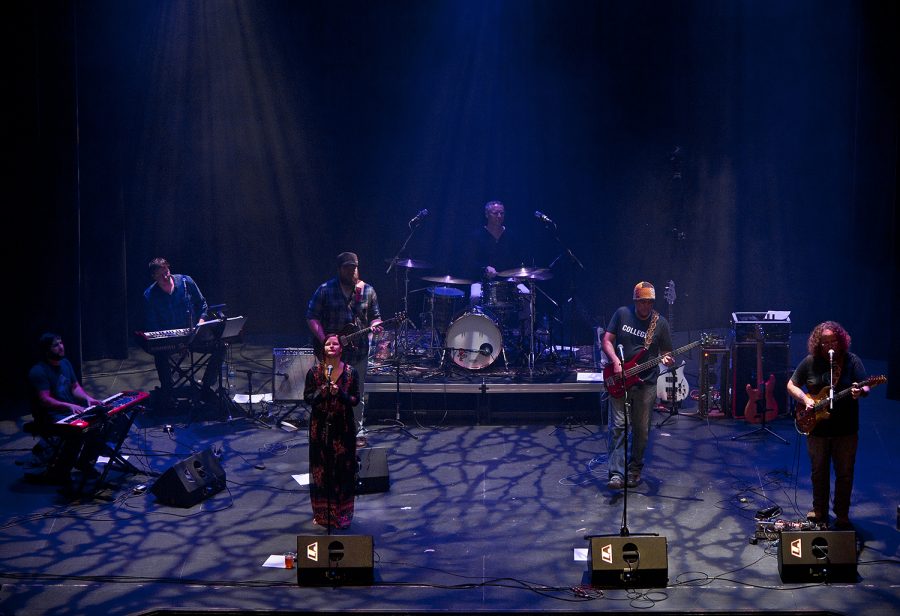 The Grateful Dead played thousands of shows for 30 years, up until 1995. People made their living traveling with them, selling bootlegged recordings of the concerts to fellow Deadheads.  Shows lasted hours on end, and no show was the same.

Winterland, an Iowa City Grateful Dead cover band, will pay homage to the legendary group at the Englert at 8 p.m. Saturday.

Guitarist, singer, and songwriter Stacy Webster formed Winterland around five years ago, when he started as a full-time musician.

“I love practicing; I don’t find it tedious. I love learning new things about music,” he said. “I think about music all the time. It keeps me up at night. I’m fairly obsessed with it.”

Webster said that during the 30 years of touring, no Grateful Dead show was ever the same.

“They didn’t have set lists. You can listen to dozens of versions, and none of them are the same. They’re all completely different, they’re like snowflakes,” he said. “They just made it up as they went, highly improvisational, not only within the balance of the songs but even in the show overall. They didn’t plan the show. You kind of have two lead singers going back and forth, so we try to do that, too.”

Webster is the lead singer and lead guitarist, and the band has recruited another member: pianist, singer, and composer Bill Campbell, who joined a month and a half ago. Webster said they will eventually each sing an equal number of songs.

“The musicians in the group are really good, and I’m enjoying the music, and I wouldn’t do it if both of those things weren’t true,” Campbell said. “It’s been a short trip so far, but I’m looking forward to more after this.”

The Englert show will be his second performance with Winterland.

“The way that I came into this group is that the other keyboardist wasn’t able to do a gig, and so they called me on a Tuesday for a Saturday night gig,” he said. “I learned the songs in a couple days and had some fun with the guys. [Webster] asked me if I would be a more regular member of the group, and I ended up saying yes.”

Campbell is also a music professor at St. Ambrose University, teaching classes on music theory and composition by day and playing in a Grateful Dead cover band by night.

“That’s kind of a weird thing for a music professor to be playing on, but I’m having a blast,” he said. “I’m learning a lot about the Grateful Dead that I didn’t know before that is well beyond just rock or any popular harmonies, and the rhythm structure is also pretty advanced,” he said. “It’s been a fun little journey here for the past month and a half. I think it’s good to go out and play a different kind of music than I would normally expect to play.”

Saturday will be Winterland’s second performance at the Englert. The members have picked a specific show to recreate: a Grateful Dead performance on May 9, 1977, in Buffalo, New York. The concert will start at 8 p.m., and Webster said it may last an impressive four hours.

“We are pretty exploratory, and usually, we do our own thing. We just do set lists that we want to do,” he said. “But this is a special occasion where we’ve picked a show that is a really special collection of songs. We’re going to do all the songs in that show, and it was a long show. It’s an homage to that show.”

Webster said he plans to bring some of his original music to future shows.

“We’re working on original tunes that we’re going to start cutting in at some point,” he said. “We want to start morphing from just a cover band to a band that plays a ton of Dead but also does its own songs.”

Bass player Byron Stevens, who has played for more than 20 years and has been with Winterland for three years, likes the group for its cohesion.

“It’s like a family,” he said. “We all bring something that the audience listens to. Regardless of the venue, there’s always a feeling of camaraderie and excitement. The things that we do are pretty darn special. It is the best ensemble I’ve ever been a part of. It’s just a great group of people I can share very special times with, and I’m incredibly thankful for that.”

Stevens said that he lets the music flow through him, transforming what he feels into movements with his fingers.

“We pay homage and respect to the songs,” he said. “Everything fits the way it should, but there are certain little nuances that everyone brings to the table regarding how to feel the energy. That’s what sets us apart; we’re not sterile. Everyone’s personality is what makes it special.”