The state Board of Regents proposed the contract for COGS early this afternoon. COGS expressed their frustration since the contract included a policy on wages, but not other items such as paid leaves, working hours, and sick-leaves. 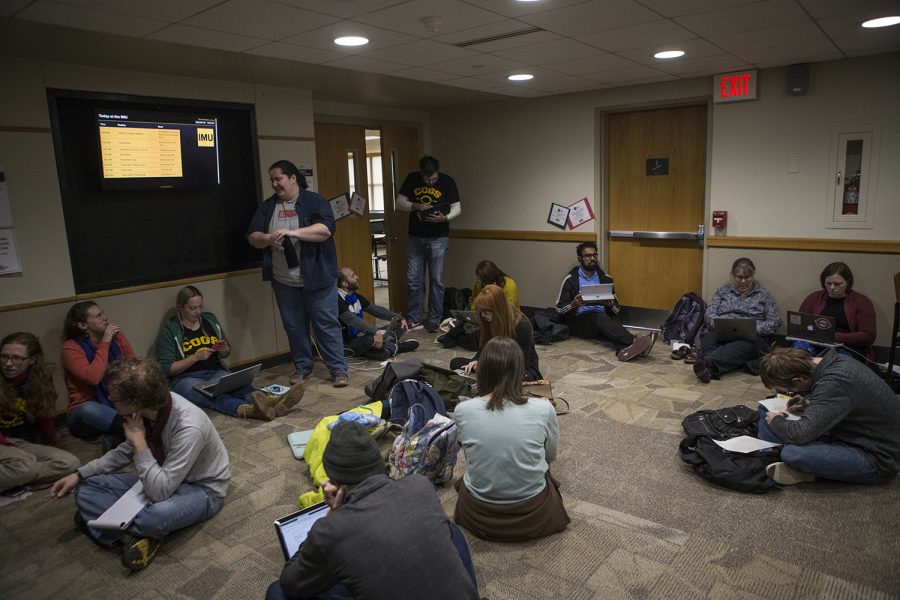 On Tuesday, December 12, 2018 Student organization COGS staged a work-in in the IMU.

The state Board of Regents’ contract proposal for the University of Iowa’s graduate employees’ union included a policy on wages, but not other items such as sick-leave policy, paid leave, and working hours, that union members had hoped would end up on the bargaining table.

Regents’ representatives met with Campaign to Organize Graduate Students members in the IMU on Wednesday for contract negotiations.

Several items were taken off the bargaining table in negotiating COGS’ contract after a 2017 law change affecting Iowa’s public-sector unions and their collective-bargaining rights.

The 2017-19 contract approved after the February 2017 law change covers wages, the only mandatory topic required to be negotiated by the law. All other topics are “permissive” and the law requires both parties involved in a negotiation to mutually agree on such topics for negotiation.

Related: COGS, Board of Regents kick off contract negotiations

COGS was hoping for a 5 percent raise in wages. However, the regents proposed a 1 percent increase.

Despite the law change, COGS members hoped the regents would include wages, hours of work, grievance procedures, and employee-wellness policies, among other items, in their proposal for the 2019-20 contract. COGS also sought a raise that would factor in the cost of living plus 3 percent.

Michael Galloway, chief negotiator for the regents, proposed the regents’ revised contract proposal on Wednesday. The contract will be further revised in negotiation meetings over the following months.

“We want to talk about wages and other items in an inclusive way,” Galloway said. “We are open to a discussion.”

COGS President Laura Szech said COGS members feel the regents are willfully ignoring their demands, and did not reflect the suggested changes in their proposal.

Galloway said this is the typical process the negotiations have to go through. Rarely do employers adopt proposals made by its employee union in the initial meetings, he said.

“It is our understanding that if you’re not willing to discuss the permissives of the rest of contract besides one page, then that won’t be in the negotiations sessions,” Szech said.

COGS members expressed concern because the regents were not willing to discuss permissive topics other than the mandatory topic of wages.

They argued that the regents’ proposal did not include aspects such as sick-leave policies and hours of work.

Michael Goldberg, COGS’ bargaining and grievance member at-large, said the bargaining unit has been frustrated with the contract, as it only includes wages.

“We are eager to enter into negotiations so that we are protected as employees and we are a little frustrated because we were presented again with just a page,” he said.

COGS is still hopeful given Galloway’s language that the door is still open to discuss permissive topics, he said.

“We hope that they stick to that and we have a robust negotiation and come to a conclusion that both parties can be happy and comfortable with moving forward,” Goldberg said.

The first round of closed negotiations will be held on Jan. 16.