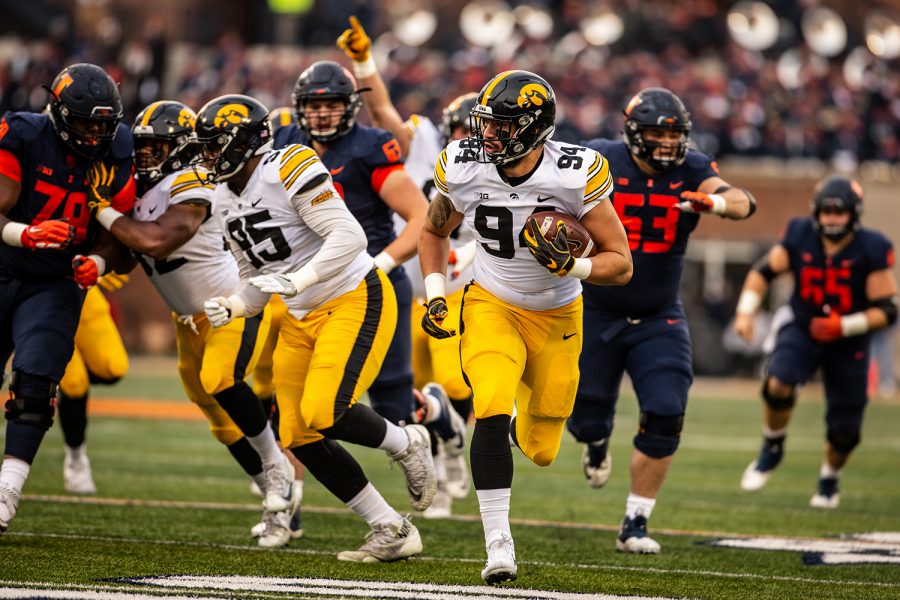 Iowa defensive lineman A.J. Epenesa returns a fumble for a touchdown during Iowa's game against Illinois at Memorial Stadium in Champaign on Saturday, Nov. 17, 2018. The Hawkeyes defeated the Fighting Illini 63-0.

Well, this one was a no-brainer.

Iowa’s defensive line wreaked havoc on opposing offensive lines week after week, and the numbers back it up — the Hawkeyes averaged nearly 3 sacks per game.

Leading the charge were A.J. Epenesa and Anthony Nelson, who each finished with 9.5 sacks (there’s also a bowl game to be played, FYI). No Hawkeyes have had more than 8 sacks in a single season since Adrian Clayborn secured 11.5 in 2009.

Epenesa, who doesn’t even start on the Iowa defensive line, tallied 4 sacks in Iowa’s first three games. He ended the season on a high note as well, getting 2.5 sacks in the Hawkeyes’ final two games (both wins) over Illinois and Nebraska. He finished with 15.5 tackles for a loss.

Nelson had three multi-sack contests this season (3 against Minnesota, 1.5 against Penn State, and 2 against Nebraska). His outing against the Gophers stands as his best of the season — he racked up 19 yards lost on his hits to the quarterback. He finished right behind Epenesa with 11 tackles for a loss.

Two sacks for either of those linemen would tie them with Clayborn for the most in a single season in the past 10 seasons.

But in the now, all of Iowa’s top-four players on the sack list registered at least 3.5, and all of them were defensive linemen. In total, 4.5 sacks came from linebackers or defensive backs. The other 29.5 came from Iowa’s defensive line.

The line plays a huge part in setting the defensive tone as well — when Iowa’s defensive line has gotten to the quarterback more, the Hawkeyes have won.

Iowa’s eight wins resulted in 27 of the Hawkeyes’ 34 sacks. That’s 3.38 sacks per win. In the four losses, Iowa’s only had 7 sacks, or 1.75 sacks per game — essentially half of the per-game mark in victories.

The rush stepped up against ranked opponents, too, averaging 3.5 sacks per game against teams ranked in the Associated Press top 25 (in terms of sacks per game, there were only 20 teams in the country ranked ahead of Iowa in that department). Also worthy of note is Iowa’s sack progression over the years. In every season since 2013, the Hawkeyes’ sacks per game rose.

While Nelson and Epenesa led the way for Iowa, Parker Hesse and Chauncey Golston followed, notching 4 and 3.5 sacks, respectively.

Half of Hesse’s sack total came in the season-opener against Northern Illinois, and while he had just 2 sacks through the remaining 11 games, he had 7 tackles for a loss during that span.

Golston registered back-t0-back games with 1 sack once, and he also tied Hesse with 9 tackles for a loss.

Head coach Kirk Ferentz pointed to one reason his defensive line has done it all — sacking the quarterback, tackling backs in the backfield — while staying consistent.

“Those guys, they’re literally together all the time,” he said. “… It’s genuine. They care about each other. They look after each other. They have fun together, but they also work hard together.”