Comedy night at the Mill brings laughs in bleak winter

A UI student led comedy night at the Mill offered laughs leading up to finals week. 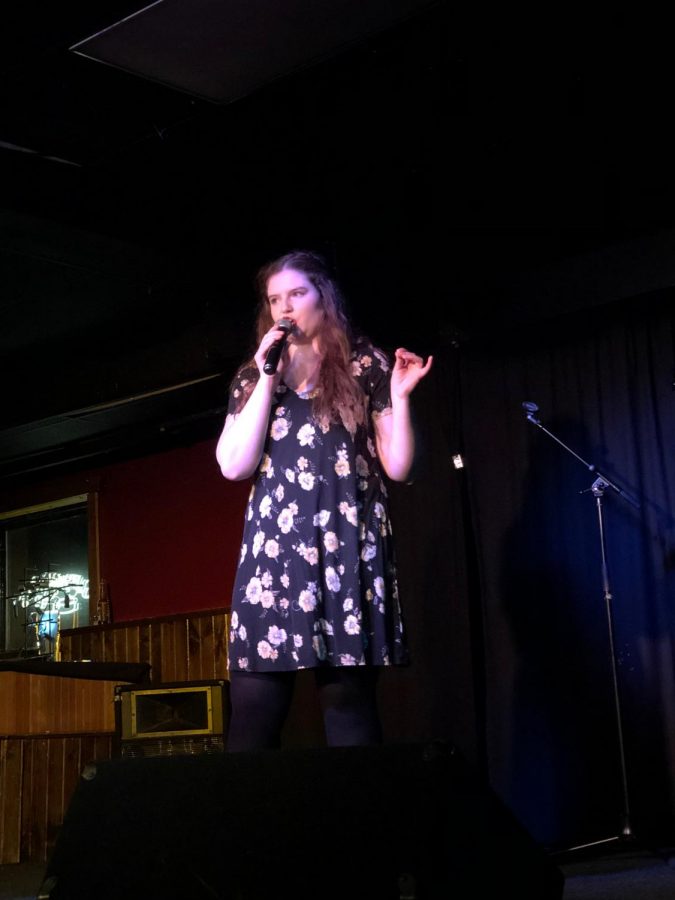 UI student Brigid Martin performs a five minute stand-up bit as a part of her Stand-up Comedy Practicum class. The show was hosted in The Mill on Sunday, Dec. 9.

It is middle of Iowa winter and the cold bites harsh enough to make one’s bones ache. But pocketed among the windy streets and dark winter night, tucked behind saloon-style doors and framed by wooden walls, is a stage with a single mic that glows yellow and purple in the lamplight.

The stage is surrounded with an audience that packs the room, their laughter warming the space and welcoming the performers. It was in that room tucked within The Mill that student comedians in the Stand-up Comedy Showcase This is Only a Test performed on Dec. 9 at 7:30 p.m.

The group of students performing were all members of a university course called Stand-up Comedy Practicum, taught by Megan Gogerty. Their final? A five minute comedic stand-up routine in front of a roomful of strangers. To many students, this might sound like a nightmare, but these students embraced the challenge.

“I’m nervous, but excited,” Brigid Martin, a third year English and Creative Writing Major said. “I really wanted to explore stand-up and learn about writing comedy, since I like to write plays. Anyone should join this class, whether or not they’re a theatre major.”

Martin, while not planning to perform stand-up for a living, hoped that throwing herself into stand-up comedy training would specifically improve her comedic writing for her future plays. Despite not being a theatre major, nor wanting to perform, Martin decided the class would better her career as a writer.

Gogerty agreed with this sentiment.

It was clear that to perform stand-up required bravery, wit, and quick-thinking, all skills that could be applied to one’s future career. And according to many of the students, the connections made throughout the process of writing their performances were invaluable.

“This class is taught by an amazing professor,” Martin said. “All of us have grown as comedians and as a group. It has been a really great experience.”

The experience was great for the students that performed, but equally as great for the audience. In the crowded room, smiles were abundant and shoulders relaxed as people sipped drinks with their friends and set aside worries about finals week, as they shared the collective joy of stand-up comedy.