Iowa wrestling preps for Lehigh by looking back

The Hawkeyes end their four-match home streak before Midlands with a matchup against No. 16 Lehigh. 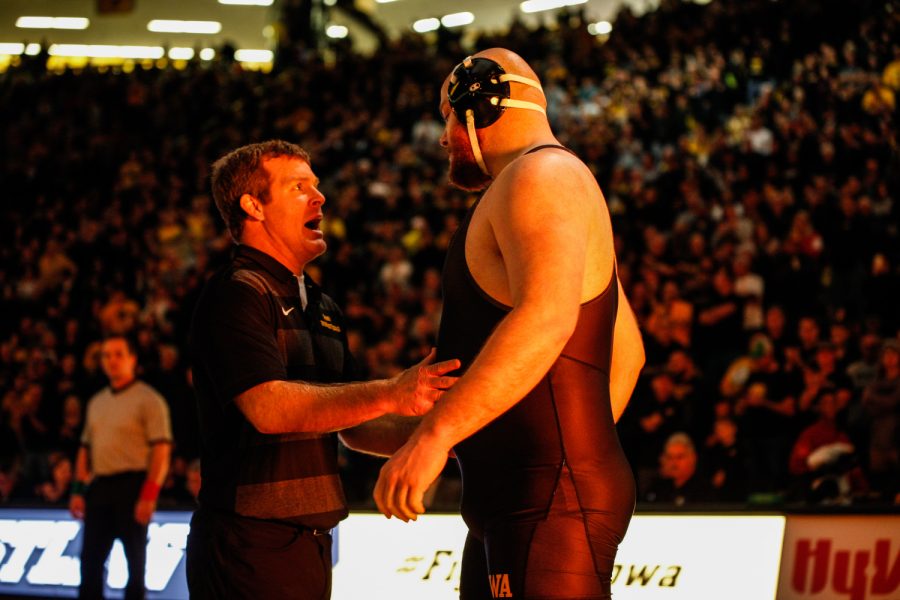 Following a 1-point win against in-state rival Iowa State, Iowa wrestling dropped one spot in the rankings. Now, facing No. 16 Lehigh on Saturday, the No. 4 Hawkeyes have a chance to reclaim their dominance.

Austin DeSanto, Max Murin, Pat Lugo, and Cash Wilcke all dropped in the rankings individually after being upset by their Cyclone opponents. However, with injuries and absences from the lineup, different athletes have been fighting through losses to still help the team.

“We’ve got a lot of good guys, and that’s a testament to our program that we’ve got guys to fill the spot and go out there, and they either don’t get the job done or they do,” 165-pounder Alex Marinelli said. “DeSanto didn’t get the job done, but he did win the dual meet getting off his back. He fought.”

Iowa has one looming question mark in its lineup. Myles Wilson left his match early against Iowa State and lost by injury default, leaving Iowa with major problems at 174.

Wilson was Michael Kemerer’s backup for the early part of the season and was expected to be the long-term solution when it was announced that Kemerer would miss the remainder of his junior season because of surgery.

With the loss of Kemerer at 174, Iowa has been looking to other classes for bonus points. That got a little easier with the return of Sam Stoll on Dec. 1.

Whether or not Stoll wrestles against Lehigh — it might come down to a match-time decision, depending on how the dual is going — his going against Iowa State showed both coaches and fans that he is available.

“The No. 1 ingredient in that is making sure we have 100 percent his interest in mind,” head coach Tom Brands said. “Why rush it? Our best chance [against Iowa State] is with our best guy, and that’s what Stoll’s rational was. That’s where we are with him, and the best decision for him is going to be what you see on Saturday.”

Last weekend, while Iowa was preoccupied with its own problems, Lehigh was swept, 42-0, by No. 1 Penn State. The Mountain Hawks have yet to record a win this season.

Iowa can take advantage of the situation it is being handed — and show that it can measure up to the Nittany Lions — if it takes its mistakes from Iowa State and turns them around.

“Tom kind of mentioned this in our meeting the other day — we went 5-5 in matches when we very easily could have went 10-0 in matches,” 197-pounder Jacob Warner said. “We lost a lot of matches in the last second. It doesn’t really tell me anything other than we know how good we are, we know how we wrestle and how we can compete. It might not have been the best last Saturday, but it can be better this Saturday.”

This is Iowa’s last dual meet leading up to the Midlands Championships on Dec. 29-30.