UISG, LGBTQ Resource Center, and Johnson County Public Health provided the first free HIV testing event in UISG history, with hopes to expand upon it for the future. 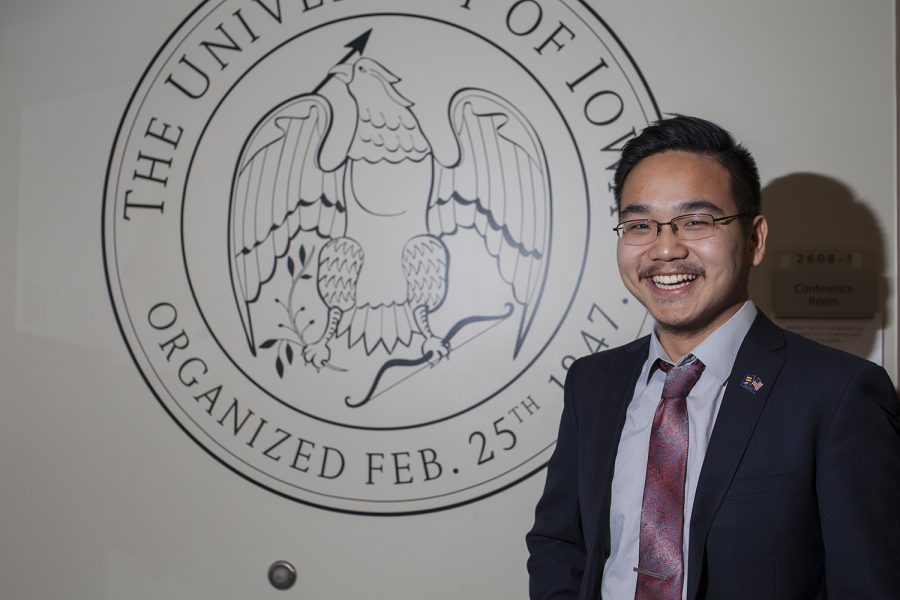 UISG Sen. Zhiting Feng poses for a portrait in the IMU on Tuesday Dec. 4, 2018. Feng will propose an initiative to provide HIV testing every semester.

The University of Iowa Student Government, in partnership with the UI LGBTQ Resource Center and Johnson County Public Health, has set forth the very first initiative regarding free HIV testing at the UI.

The project was led by UISG senator Zhiting (Jack) Feng.

“I began this project as soon as I was elected into office,” Feng said. “HIV is a public health crisis within the United States. As a homosexual man, I know my responsibility to get tested. As an intern at Johnson County Public Health, I saw people that were so reluctant to get tested because of the internalized stigma surrounding the identity of someone with HIV.”

According to the Human Rights Campaign Foundation report, 24.5 percent of college students reported being tested for HIV.

“I believe an inadequate sexual health education is a key barrier to increasing HIV prevention and care in our community,” Feng said.

From the Human Rights Campaign Foundation Report, there has been a decreased percentage in schools requiring students to have an accurate sexual education.

“Some people have misperceptions on HIV transmission and that’s why people are still affected by the stigma,” Feng said. “Many will deny the possibility simply because they are heterosexual. This type of mentality can lead to risky sexual behaviors.”

Since August, Feng has been working to find a way to defeat the stigma surrounding HIV testing and educating students on HIV through the Health and Safety committee within UISG.

“College students are more likely to engage in high risk sexual behaviors,” Feng said. “They are more likely to involve themselves with drugs or alcohol. But they are less likely to talk about HIV status or STI status. This is why we need to provide an opportunity for students to have this confidential testing and counseling.”

On Wednesday, four students were tested for HIV in confidential settings at the LGBTQ Resource Center. Feng said UISG hopes to provide for more events like this, involving the other cultural houses on campuses.

Students at the UI pay $175 in a student health fee, covering both visits and sexual health as well. However, HIV testing through Student Health can run anywhere from $25 to $30, dependent upon one’s insurance plan, Feng said.

“We chose the LGBTQ resource center for the first HIV testing event because the LGBTQ community has been disproportionately impacted by HIV epidemic,” he said.

Emma Welch, the LGBTQ Resource Center Coordinator, said the LGBTQRC was excited for the partnership with UISG and Johnson County Public Health.

“There often is an extra layer of fear when talking about HIV compared to other diseases,” Welch said. “We want to promote that there is no shame and there are positive aspects of getting tested and knowing your status.”

UI student Alex Bare said events like these are very important to him.

“It is crucial to break down the stigma associated with HIV,” Bare said. “Having testing events like these encourage people to feel comfortable and get tested. One in seven people who are HIV positive don’t know that they are, so it is important to encourage students on our campus to get out to these kinds of events.”