Mahoney: Bush’s relationship with Iowa, and the response to his death, stands as another reminder of respect

As the nation’s officials respond to the death of George H.W. Bush, and Iowa’s leaders chime in, we receive yet another reminder of why respect is important. 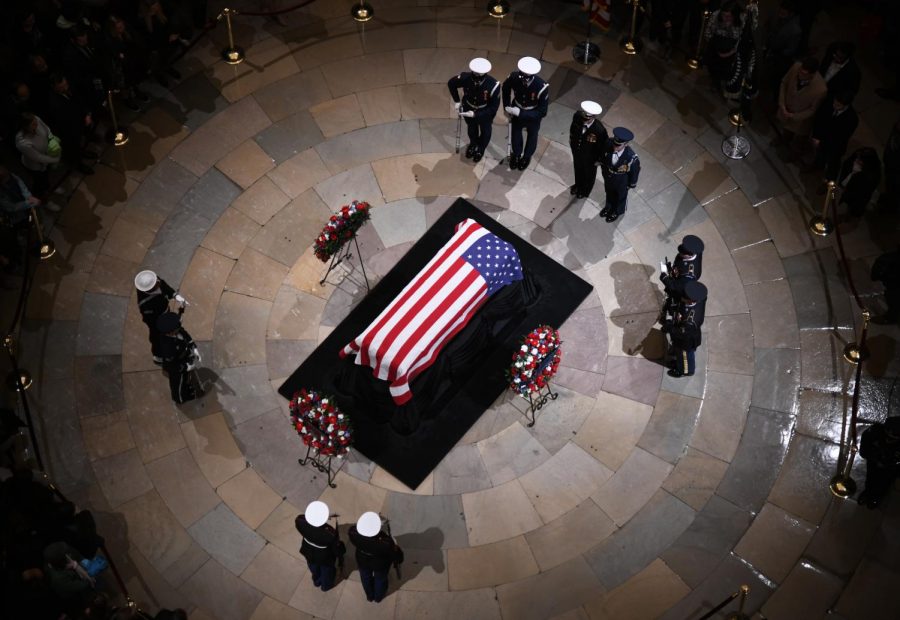 Joint services military honor guards stand next to the flag-draped casket of former U.S. President George H.W. Bush on the Lincoln catafalque during a memorial service at the Capitol Rotunda on Dec. 3, 2018 in Washington, D.C. (Olivier Douliery/Abaca Press/TNS)

2018 has been a very difficult year in the political sphere, even without including the death of some political titans (see: John McCain). Now, as of Nov. 30, former President George H.W. Bush has joined their ranks.

This was a titan of a man, who fought in World War II, was a congressman, directed the CIA, served as ambassador to the U.N., envoy to China, vice president, and president of the United States.

Rightfully so, Bush received much praise upon his death. In honor of this former president, I thought I’d look back at the relationship between Bush senior and Iowa and the example he sets for Americans: Civility is possible.

First, let’s take a look back at Bush’s encounters with Iowa. Starting with the 1980 campaign, Bush really surprised the nation when his popularity rose high enough to defeat Ronald Reagan in the Iowa Republican caucuses, 31.6 percent to 29.5 percent. This surge of support in Iowa, one of the few states to go for Bush in the 1980 primary/caucus season, is seen by many as one of the factors that helped catapult Bush to the vice presidency, and later, the presidency.

When we look to today’s politics, Iowa Democratic and Republican officials alike share kind words and even some memories of Bush. Gov. Kim Reynolds (R) sent kind words, paid her respects to the Bush family, and called for the flags to be at half-staff for 30 days in honor of Bush. Sens. Chuck Grassley and Joni Ernst, R-Iowa, both sent the same, with Ernst writing that while serving in Iraq, many people were grateful for the Americans and “… viewed George H.W. Bush as their savior.” Rep. Dave Loebsack, D-Iowa, joined in, saying, “From the military to the Oval Office, [Bush] served our country with honor and dignity.”

People set politics aside to show respect, rightfully giving Bush a kudos on a job well done, a mission completed.

These kind words are reminiscent of the ones that we saw for McCain from all over the place. This respect in death is obviously something that we expect. Though we are able to set aside political differences to celebrate these political leaders’ lives, the mailing of pipe bombs to Democratic officials is not a far-off memory.

I mean, come on. Look at the end of Bush senior’s life. Many pictures of him with the Clintons and Obamas depict Bush setting aside political differences to simply enjoy life.

He was elected president only 30 years ago. That he was able to enjoy the company of people he disagrees with shows that politics do not have to drive people apart. In fact, Bush is a prime example of how having different ideas can bring people together.

Recognizing that civility is possible, I’m tired of writing articles asking for change, asking for us to respect one another. I’m tired of seeing people going after each other because they disagree politically. I’m tired of being disrespected myself about my political affiliation. We’ve had enough reminders. It’s time now for us to put on our adult pants. If Bush, a former president, the most political position in our country, can set aside political differences to be civil with others around him, the average American should be able to do the same. Things need to change now.