Les Misérables has finally arrived at Hancher Auditorium this week, and delivers a smashing performance. 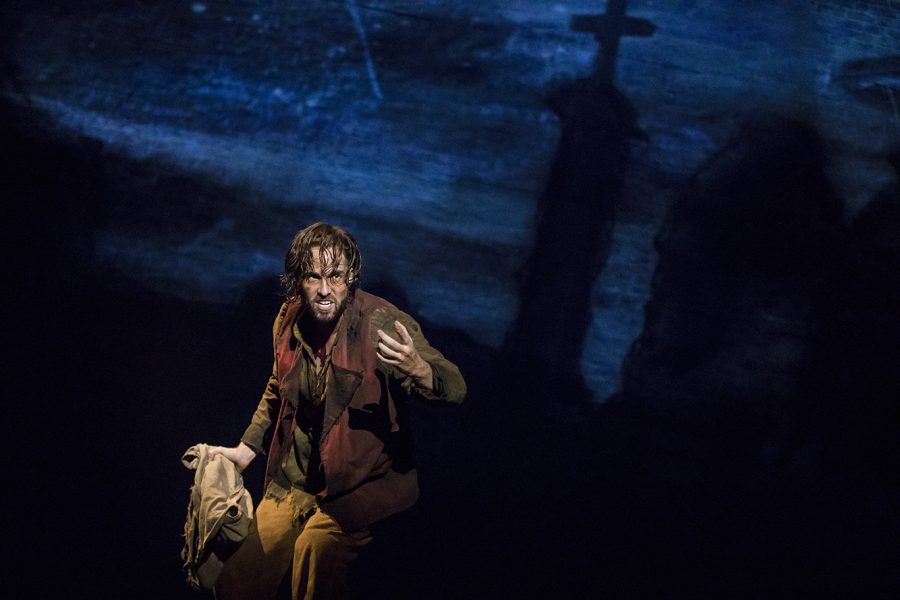 Les Misérables, the world’s longest running and arguably one of the best musicals created in the 20th century, opened at Hancher Tuesday night.

Seats filled up fast in the belly of Hancher’s main auditorium, and a large screen with a ship weathering a storm loomed over the stage. The “Prologue” song began with force filled with the beauty and strength needed to withstand prison for 19 years. The year is 1815, and Jean Valjean is being released by Inspector Javert and put on parole.

The plot of Les Misérables follows Valjean as an ex-convict, redeemed man, father, generous helper, and an old man, all of which take place between the years of 1815 and 1832. Javert, being the self-righteous hound he is, never adopted any of these characteristics other than his growing old. However, both characters are shown aging by not only makeup, but by their singing as well. Their powerful voices echoed in the auditorium, impressing many by the wide range they possess.

From 1815-1823, the audience is greeted with several characters who weave in and out of Valjean’s life, many of whose suffering is caused by severe inequality. The characters have their own turmoil, which is sung through sorrow or questioning of one’s morality. Fantine’s story is especially heartbreaking, because her obstacles of abandonment, prostitution, and tuberculosis were such common downfalls of women in the 19th century. “I Dreamed a Dream” beautifully expresses Fantine’s heartbreak of what life has done to her.

Les Misérables has an intricate set that consists of tall, yet run-down, 19th-century buildings and enormous barricades composed of furniture that failed to protect the students during the Summer Revolt of 1832. The screen is also cleverly used as a backdrop for parts of the musical that are simply too gruesome to build with a hammer and nails. After the failed revolt, Valjean carries a wounded Marius through the sewers of Paris. With the help of the screen, the audience is able to see the endless twists and turns Valjean takes in the disgusting sewer.

Several characters in the musical are displayed as putting others ahead of themselves. The Bishop who gives Valjean his silver candlesticks, Fantine wishes for her death instead of her daughter’s, Valjean adopts Fantine’s daughter, Cosette, and risks his life for Cosette’s lover, Marius. Enjolras, Marius, and the other revolutionaries placed the welfare of France’s working class above theirs and fought for equality of all people until the very end. Les Misérables is a masterpiece of enchanting music and nearly real stories of people fighting for a brighter future. It is here to remind us that much about the world has changed, but much of it has remained the same.