New ‘offices on wheels’ roll up to Iowa City

The mobile office company LandJet is expanding from the Quad Cities, bringing its services to surrounding Iowa metropolitan areas, including Iowa City. 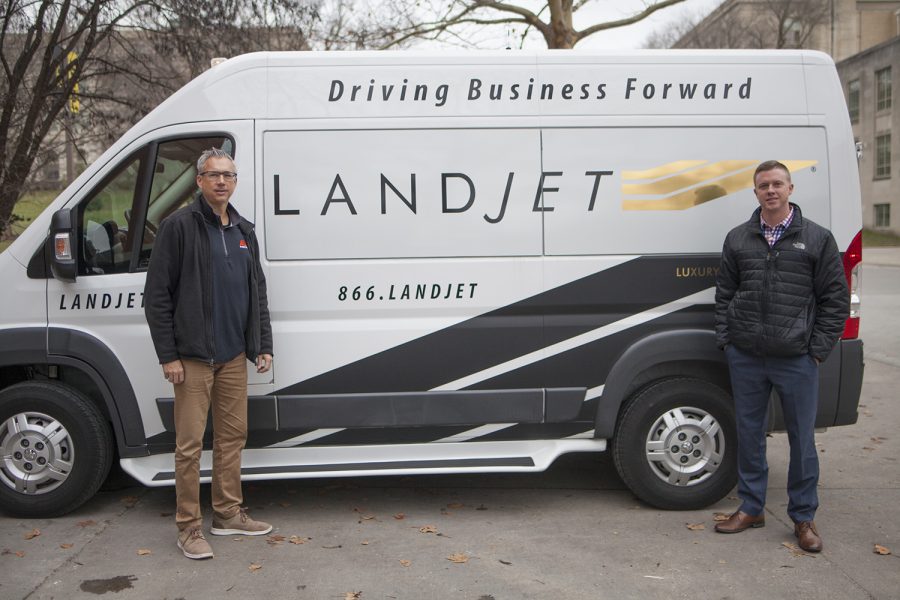 Land Jet CEOs Mark A. Ross and Nick Thul are seen in front of their company van on Monday, December 3, 2018. Land Jet is a rental company that offers a private, mobile office inside their van. (Tate Hildyard/The Daily Iowan).

A new way to travel has rolled into Iowa City, giving customers an opportunity to be productive on their commutes to work and other business destinations.

Quad Cities company Landjet offers transportation in the form of offices on wheels. Riders can practice a business pitch on the TV projector screen in the company’s “rolling boardroom” or print important documents in the smaller “rolling office.”

“Using Landjet’s service, you wouldn’t have that unproductive downtime,” said Steve Thornburg, one of the founding members of the company.

Ross said Landjet launched in October in the Quad Cities, sometime after he and Thomson discussed turning Thomson’s personal method of transportation into a business. Thomson said he had purchased a Dodge Caravan and had a carpenter friend convert it into an office so he could continue to work on his commute to his workplace in Madison, Wisconsin.

“I hired a couple drivers, and they took me all over. It worked great,” Thomson said. “I got hours of my life back because of it.”

After a period of research, the two entrepreneurs discovered a similar service called Landjet in Indiana, which sold customized mobile offices but did not offer rental rides. After running the initial idea for the company through the University of Iowa Pappajohn Entrepreneurial Center  at the beginning of 2018, the two purchased Landjet in the spring.

Landjet offers two unique transportation vehicles. The first is the Rolling Board Room, set up with a full-size desk, a TV projector screen, and charging stations. At $200 an hour, Ross said, the vehicle seats four to six people and is equipped with enhanced WiFi. Inside, riders can complete work while relaxing in comfortable seats in blue and purple mood lighting.

“It’s a perfect environment to be productive in a meeting setting,” Ross said.

The smaller Rolling Office serves one to three riders for $125 an hour. In it, users who prefer to work alone or in a smaller setting can use the vehicle’s desk, printer, shredder, and TV monitor, Thornburg said.

As of Sunday, the company had hired a new president, Nick Thul, who plans on helping the company grow from the Quad Cities and secure itself as a franchise in the future.

Thomson said the service has been well-accepted so far in the Quad Cities and elsewhere. From there, the company hopes to expand further. Thomson said he and his partners think, without question, that Landjet could eventually become a national service.

“It’s been a lot of fun; we’re really looking forward to the next phase in 2019,” Thornburg said.