While looking for a part-time job abroad, third-year student Danielle Leveille tried her luck in the Japanese modeling industry. Leveille found herself taking up 10-12 modeling jobs a month and a full-time position through her agency upon graduation. 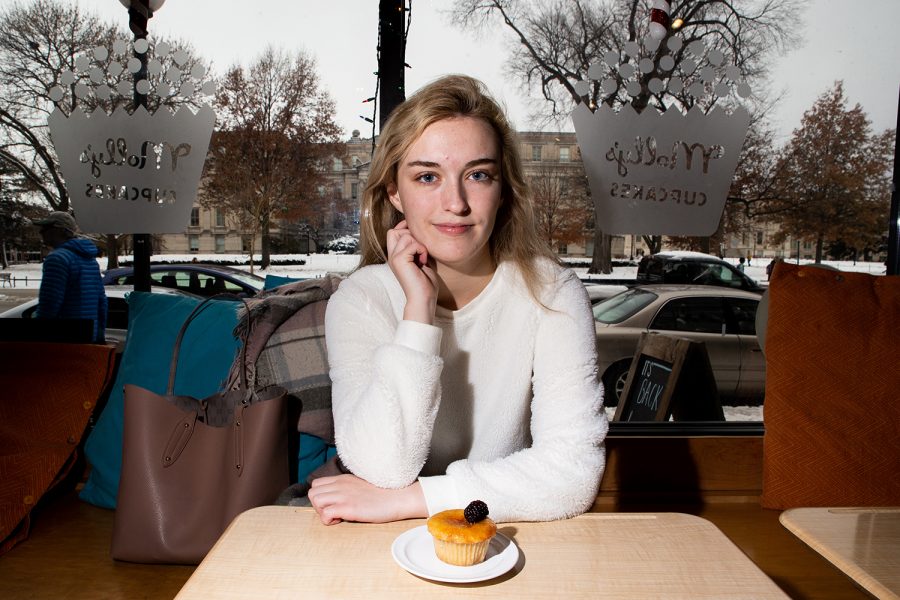 Danielle Leveille poses for a portrait in Molly's Cupcakes in Iowa City on Wednesday, Nov. 28, 2018.

Danielle Leveille’s Instagram looks like that of any successful model. Photos from various styles of fashion shoots fill her feed, captioned almost entirely in Japanese. However, Leveille is not a full-time model in Japan; she is a third-year UI student.

A native of Chicago, Levielle began learning Mandarin Chinese in elementary school. She continued the language through high school, she said, until getting bored and deciding to teach herself Japanese.

During high school, she spent a month in Japan for two-consecutive summers with a host family, immersing herself in Japanese language and culture.

When she arrived at the UI, she was fluent in Japanese. She said she knew she wanted to return to the country she fell in love with, so Leveille studied abroad last year in Tokyo.

Expenses, especially for an entire academic year, can be daunting for students abroad. She decided to look for part-time work and was interested in modeling.

“In the U.S., you have to be at least 5 feet, 10 inches for modeling agencies to even look at you, but Japan doesn’t have the same standards,” Leveille said.

Within a month, Leveille, standing 5 feet 5 inches tall, had signed with four modeling agencies. After the first few months of doing fashion, product promotion, and commercial modeling, she was getting nearly 30 emails a month for different jobs. She did broadcast journalism and translation through the modeling agencies as well.

“I was just scrolling through Instagram, and I realized Danielle’s page was deactivated,” said UI student Chelsea Higgins, a friend of Leveille. “I thought that was weird, so I Googled her name and found out she had made a new Instagram just for her modeling and her study-abroad adventures. It’s so cool.”

While in Japan, Leveille reconnected with friends she made while staying in Tokyo in high school, and she made new friends with other students and foreign models she worked with.

“While in Japan, Danielle earned academic credit toward her degree,” UI study-abroad adviser for Japan Toni Bartolutti said. “She got professional, real-world experience to add to her résumé. And she built a network of local friends, models, and professional colleagues. Through her time, she cultivated a personal brand and transformed herself into a global citizen.”

On returning to the U.S., Leveille sent her portfolio to agencies close to home and signed with a company in the Quad Cities. Leveille has done a few jobs since returning in August, she said.

One of Leveille’s agencies offered her a full-time position when she returns to Japan. After graduating from the UI, she plans to move to Tokyo for a few years and work for the agency, she said.

Leveille said she sees Japan as her home away from home. Instead of fearing the culture shock, she embraced it, allowing her to fully take advantage of everything Tokyo has to offer. While she appreciates where she is now in Iowa City, she said, she anxiously awaits returning to Japan.

“[Cultural immersion] can open doors for more career options, and it can help you build relationships with people that you would’ve otherwise never have approached or tried to build a relationship with,” Leveille said.