Les Misérables is coming to Hancher, bringing with it songs of love, redemption, and rebellion. 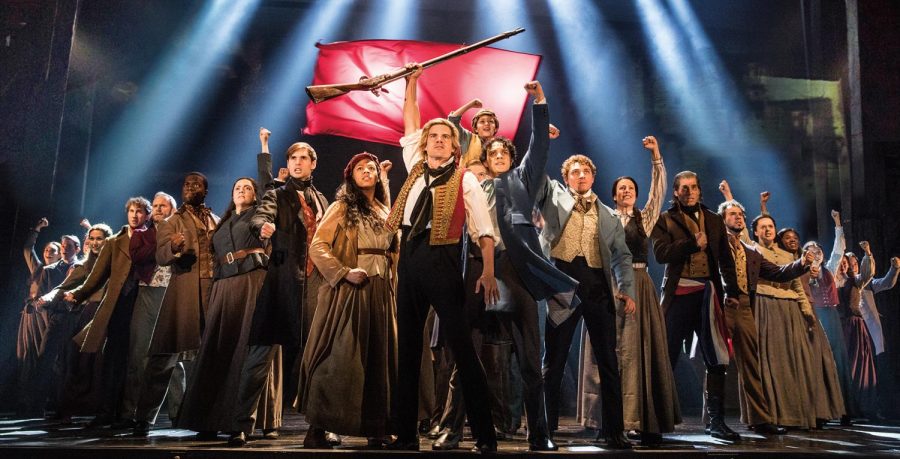 A little over 30 years ago, the Broadway production of Les Misérables made its debut, transforming the world of musical theatre for one day more. The massive production makes its way to Hancher for the sixth time, now in a sparkly new Hancher and with a new generation of Les Mis fanatics.

Les Misérables premieres on December 4 and will perform through December 9. Because of its large set and cast size, the production performs for a minimum of eight times at a single venue. Chuck Swanson, executive director of Hancher, recalls a memory leading up to Les Mis first performance at Hancher. Swanson had to remove a load of bricks at a loading dock in order to move the giant barricades into the building.

“I’ll never forget how concerned and nervous I was,” Swanson said. “But it sold very well; it’s a show everybody wants to see. I’ll never forget how many playbills we had to order for the show. The show was so successful that we never bothered to put the bricks back in their place, because we knew we would bring the show back to Hancher again.”

Les Misérables throws a different angle towards many Broadway shows, as a majority of it is mostly sung.

“The style is called a mega-musical,” Professor Megan Gogerty said, “This style comes out of the 1980s where musicals got really, really big – big budgets, big casts, big spectacles. They’re typically sung-through and feature stories and ideas that might appeal to a global audience.”

The musical launches its first act with main character, Jean Valjean, who is seen doing harsh prison work with his fellow inmates. The plot follows various characters who all are intertwined, each with their own obstacles and thematic questions. Joshua Grosso, who plays the character of Marius, interprets themes through the line of characters.

“The show is filled with so many specific themes,” Grosso said, “There’s no bad guy in this show. The show lives in such a gray area, and that’s the biggest lesson to take out of the show. You can take a character and make their own show out of it. They deal with such personal issues of whether or not they’re doing the right thing.”

Les Misérables occurs during a time of political and civil unrest in mid-19th century France. Poverty is the reigning class and young-adult students, like Marius, are crying out for change. The production remains a timeless classic because of its human-like themes of morality and justice.

“We question our own existence, we still ask ourselves and it deals with that,” Grosso said. “Any good story deals with what it’s like to be human, Les Mis answers that in a variety of ways. Jean Valjean’s path toward redemption has many different types of consequences. We see the students on their path to justice. Marius and Cosette, how strong of durability of love, and it goes the same for Eponine, everyone has a different way of getting there.”

Grosso describes Marius as someone who is passionate, but this best element of him is also his greatest fault. Marius tries to bring justice to the poor but once he meets the love of his life, Cosette, his decision to stand by his friends comes at a difficult verdict.

“It’s interesting to play someone who doesn’t know what the right move is,” Grosso said, “I think he’s genuinely asking of what’s my purpose in life. He’s caught up in a huge life changing event. What do you choose? Do you think selfishly, or do you go out and sacrifice that for the greater good? That doubt is one of the greatest treasures he brings to the plot, it shows how human nature hasn’t changed.”