Benches in the Ped Mall are meant to move the homeless elsewhere, out of public sight, and should be removed. 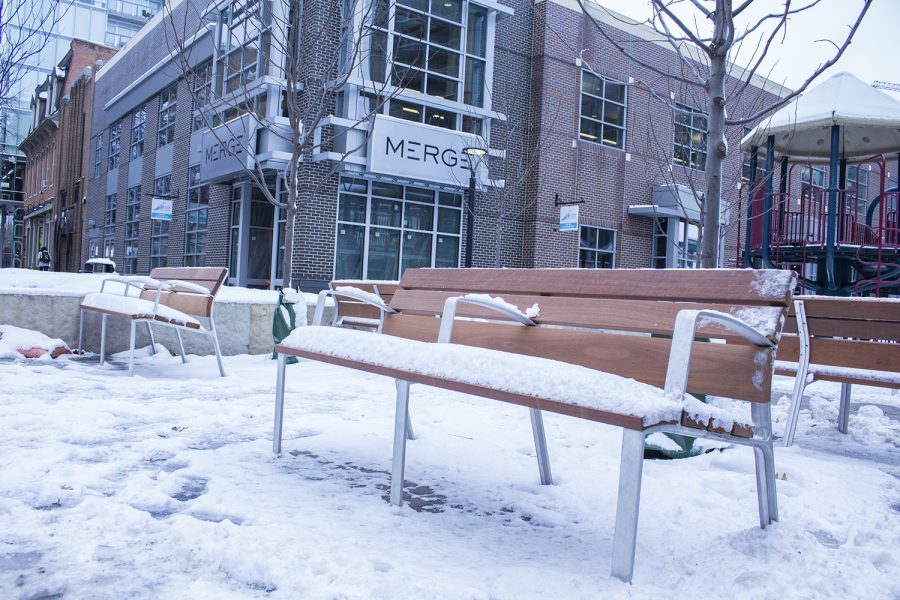 The Pedestrian Mall construction, which began with the adoption of the plans in 2014, has been an ongoing presence for some time now. According to the city’s website, the project was undertaken in part to improve “Iowa City’s uniqueness and its cultural footprint in the area.”

However, the newest addition to the area has been called out for its discriminatory purposes. Unlike the previous benches, the new benches have a central armrest bar that prevents people from lying across them, which many have pointed out seems to actively discriminate against the homeless in Iowa City.

Scott Sovers, the project manager for the Pedestrian Mall Improvements Project, said the new benches were designed to increase seating.

“During the planning phase of this project, we received consistent feedback that more seating areas were desired,” Sovers wrote in an email. “Because we felt that there was not physically enough space to include additional benches, we were able to increase the effective seating opportunities by utilizing a style of bench that included a center armrest. … We consistently received positive feedback on the style and use of the center armrest as a way to increase seating areas.”

However, other perceptions of the benches see these center armrests as a ploy to remove spaces for homeless in Iowa City, attempting to distance them from public view.

A Facebook post that has been gaining traction in the area asks, “Do Iowa City’s new Ped Mall benches discriminate against the homeless?”

After being reposted on Twitter and shared on Facebook numerous times, it seems as if the collective answer is a resounding yes.

The new Ped Mall benches seem to me to be one example of a growing trend of so-called “hostile architecture,” designed specifically to deter people from using public spaces in ways that are not “intended.”

Attempting to discourage the homeless, primarily, from lying down in public areas, hostile architecture has been seen around the world: for example, in Seattle, bike racks were installed to prevent camping. In London, inch-high “spikes” were placed outside of luxury buildings to prevent sleeping.

The trend of implementing architecture aimed at pushing the homeless out of public view is a concerning one — one that seems to have entered downtown as well.

While the university also has benches with raised portions to deter homeless from sleeping there, the addition to downtown — an area busy with townspeople, out-of-towners, faculty, staff, and students — is new and far more concerning.

Iowa City has long had an issue with high poverty rates — 28 percent, according to a 2012-16 U.S. Census Bureau study — and attempts to remove homeless people from highly trafficked areas does nothing to help alleviate the issues the city faces. Instead, it simply pushes them out of public view, trying to persuade people that the problem does not exist rather than implementing actual strategies to help reduce the problem.

Without a doubt, the benches on the Ped Mall are an example of the spreading wish to distance ourselves from the realities of our economy and communities. Even if unsheltered homeless rates are decreasing, as reports from the 2017 Annual Homeless Assessment Report suggest, moving homeless people outside downtown does nothing to reduce the numbers.

Removing a space for homeless people to rest in the heart of downtown ultimately does not do anything but increase a perceived — and faulty — view of aesthetics. Is the aesthetic merit of Iowa City worth people not being able to use benches in relatively unobtrusive manners?

The use of one bench — or even two or three — by sleeping or resting, people do not affect the overall use of the downtown; there are few, if any, situations that would require the need of every bench in the area. And certainly, the times during which they are primarily used (night) would not coincide with these situations.

Regardless of the apparent need to provide more seating for the public, as Sovers’ plan indicates, the way that the city has gone about providing additional space is troubling.

To purport that the renovation of the Ped Mall is to promote community values and togetherness while simultaneously designing the new areas to be discriminatory and hostile is contradictory. The old benches, painted and open, were far more efficient in achieving that goal, if that goal were truly the purpose. Iowa City is a place that prides itself on its strong community — as it should — and if it wishes to show this to the world, its architecture should reflect this as well.