Despite some disappointment, Iowa had a solid year in a number of categories. 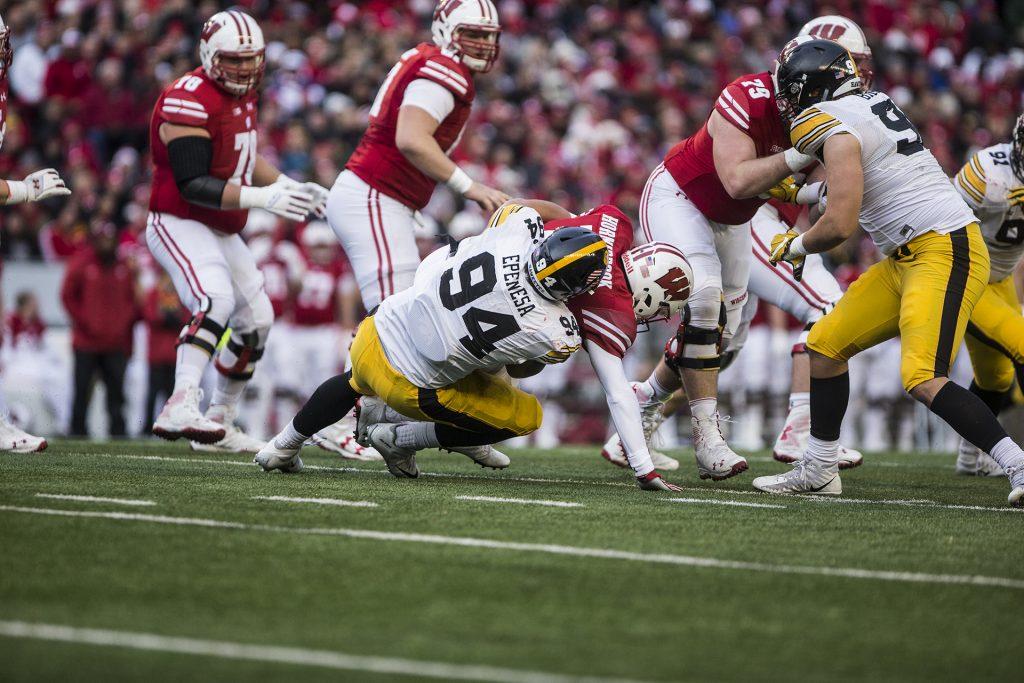 Iowa defensive end A.J. Epenesa (94) sacks Wisconsin quarterback Alex Hornibrook (12) during the game between Iowa and Wisconsin at Camp Randall Stadium on Saturday, Nov. 11, 2017. The Hawkeyes fell to the Badgers 38-14.

At one point, Iowa’s season was one that had promise, a potential appearance in the Big Ten title game, and maybe even the College Football Playoffs.

Even though the Hawkeyes fell short of those goals, 2018 served as a relatively successful season — Iowa won three trophy games and will look for a 9-win season following a bowl game (to be announced Dec. 2).

Iowa put itself at the top of the Big Ten in some categories, so here’s a look at the numbers to see how the Hawkeyes stack up.

The Hawkeyes ranked first in the Big Ten, 12th nationally, holding opposing offenses to an average of 17.4 points per game.

Those numbers are even more impressive when thinking about the questions surrounding the defense entering the season.

The linebackers were inexperienced, the secondary was unproven, but the group found a way to get the job done in most cases.

A chunk of that success was thanks to Iowa’s incredible defensive line. The deep line that was set to be a force from the moment the Hawkeyes kicked off against Northern Illinois lived up to expectations with plenty of help from its ends.

A.J. Epenesa and Anthony Nelson are tied for first in the Big Ten with Minnesota’s Carter Coughlin, taking down the quarterback 10 times each in 2018.

But the numbers Nelson and Epenesa put up are especially ridiculous for two reasons.

First, Nelson improved on his already magnificent 2017, in which he ranked fifth in the conference with 8 sacks. That’s a 25 percent improvement for Nelson, who racked up 3 more sacks than the next closest Hawkeyes last season.

Second, Epenesa isn’t even listed as a starter, but he has taken advantage of the time he received on the field. He doubled his sack total in just a year, and he is still only a sophomore. Imagine the damage he can do when he’s actually starting and has another season of experience.

T.J. Hockenson and Noah Fant led the Hawkeyes with 717 and 519 receiving yards, respectively, while scoring 6 and 7 touchdowns.

The starting tight-end tandem led the squad in both categories and were Nate Stanley’s go-to targets when on the field.

The duo racked up more yards through the air than Nick Easley, Ihmir Smith-Marsette, Brandon Smith, and Mekhi Sargent combined (1,202).

As frustrating as it may have been for Hawkeye fans to watch Fant’s involvement dwindle during the season, he and Hockenson still put up numbers that cannot be found in every program.

There was room for improvement in the offense — Iowa didn’t have its best season on the ground, and the passing game had times where it couldn’t get into a rhythm.

The tight ends filled a hole all year, though, and the Hawkeye faithful have one more game to soak it all up.