Hannah Stewart and Makenzie Meyer have taken advantage of the opposing defense’s focus on Megan Gustafson. 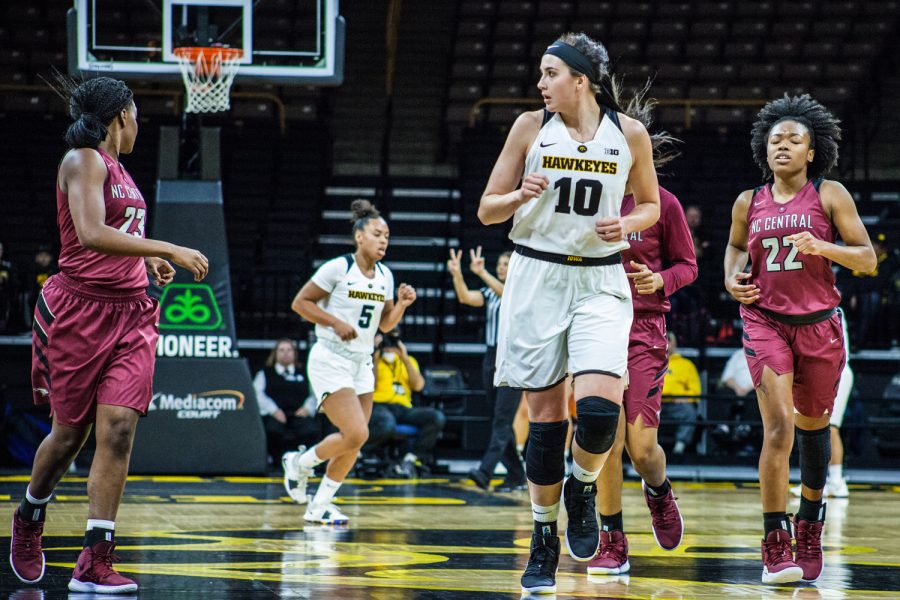 Entering the 2018-19 season, all the media focus was on Megan Gustafson, and now, during the season, Iowa’s opponents key on Gustafson with all they’ve got.

Yet the Hawkeyes aren’t worried about Gustafson; she’s used to getting the majority of the attention from opposing defenses. What the Hawkeyes did worry about was who was going to put up points when Gustafson couldn’t.

So far, the sidekick role has been shared by two Hawkeyes: Makenzie Meyer and Hannah Stewart.

While Gustafson has racked up 23.2 points a game, Meyer and Stewart have combined to average 28.4 points in the first five games.

For Gustafson and Stewart, their chemistry on the court was helped by a summer trip to Brazil together, where they represented the United States in the FISU America Games and took home the gold medal. On that trip, they were able to create some effective on-court chemistry.

“I feel like we vibe really well together,” Stewart said. “We just really know how to read each other. It’s super fun to play with her, and she knows that a lot of double and triple teams are going to be there, and I’m going to be open because of it.”

That is exactly how Stewart gets a lot of her points. A Gustafson bounce pass to a wide open and driving Stewart is something that has given opponents headaches in the first five games, and that should continue all season.

Stewart’s presence down low has led to Gustafson averaging 2.4 assists per game to start the season. That number is up from last year’s 1.4 a game.

Those assists from Gustafson have helped Stewart average 13.4 points per game, but she’s done more than score the ball.

Stewart has also averaged 7 boards, 3.8 assists, and 1 steal per game.

While Stewart has aided Gustafson’s inside game, Meyer has enjoyed success on the perimeter to complement the Hawkeyes’ post game.

Last year, Meyer proved she was a deadly threat from beyond the arc — her field-goal percentage was 37.8 from deep.

“Makenzie Meyer is our outside attack,” head coach Lisa Bluder said. “She is a very good shooter, and everyone knows she could light it up any night at any time.”

This year, she has upped her game. She averages 3 triples per contest and makes them at a scorching hot 43 percent clip.

“She’s a sniper out there,” guard Kathleen Doyle said. “She really picked up some confidence [in the] preseason.”

Her lights-out shooting from 3 land has made her second on the team in points at 15 a game, and she has also dished out 5.4 assists per game while also grabbing 4 boards.

With the injury to Doyle early in the season, the solid play of Stewart and Meyer have turned out to be huge assets.

Iowa will need both to have big games when it travels to South Bend, Indiana, to take on No. 1 Notre Dame on Thursday.