Regents, UI President Bruce Harreld, and UISG are optimistic the multiyear tuition model will be better for students, with predictability being the key. 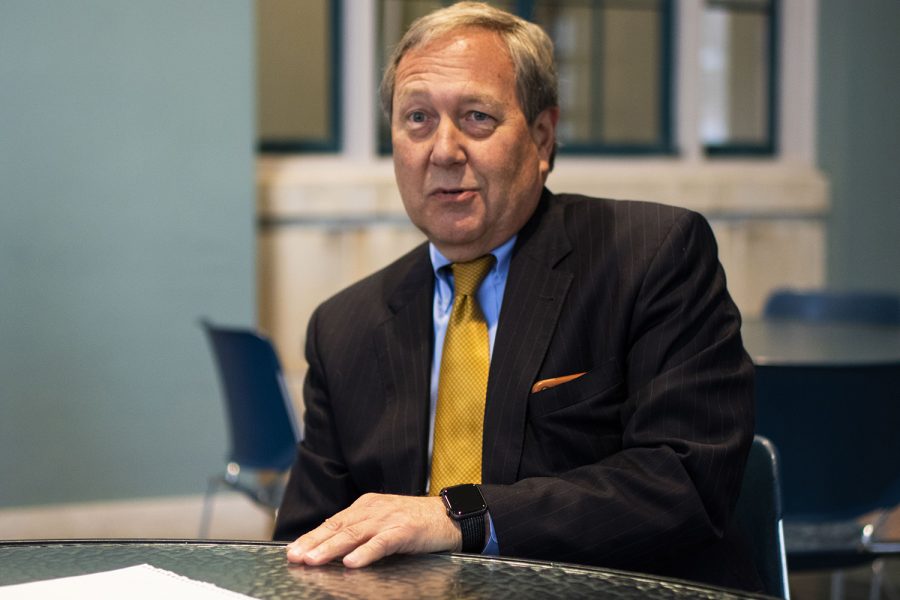 UI President Bruce Harreld speaks in an interview with The Daily Iowan after the state Board of Regents meeting at the University of Northern Iowa in Cedar Falls on Friday, Nov. 15, 2018.

CEDAR FALLS — University of Iowa President Bruce Harreld said Friday the state Board of Regents’ newly proposed multiyear tuition model is “much better for students” because of its predictability.

Harreld told The Daily Iowan Friday after the regents’ meeting at the University of Northern Iowa that the proposed timeline for discussing and voting on tuition can mean multiple things for UI students. He highlighted the predictability, as the model lays out a range of tuition increases for the next five years.

“I think you can expect to be in this 3 to 6 percent range every year therefore, it’s going to cost more. Not good, but those are the facts,” Harreld said.

Regent President Mike Richards announced at the Thursday meeting that through the regents’ multiyear tuition model, resident undergraduate students at the UI and Iowa State University could see a potential tuition increase of 3 percent per year for the next five years, if the regents’ state appropriation request is funded.

If the state does not provide additional funding for regent universities, tuition will increase by 3 percent plus Higher Education Price Index.

The timeline for discussing tuition will remain the same as in the last year with a first reading of tuition rates in April and a final vote in June.

In past years, the regents set tuition in October before learning how much state funding they would receive, as the state Legislature determines appropriations during the spring legislative session. Funding cuts prompted the regents to reset tuition for the academic year.

With the final vote on tuition in June, it will allow the regents to avoid resetting, Harreld said.

“I actually really think it’s much better for students, because it’s now predictable. We can see what the state does, and then we will set, in the early spring time, the tuition,” Harreld said.

In an email to The Daily Iowan, UISG President Hira Mustafa said she is happy to hear about the regents’ new tuition model.

“Increasing the predictability of tuition prices gives families more time to plan around the cost of attaining a degree from the University of Iowa,” Mustafa said.

The universities in the UI’s peer group follow a similar timeline as the one the regents will be following, Harreld said.

Richards on Friday noted the state’s financial situation is “better off.”

Iowa’s GOP politicians, as members of the majority party dominating state government, have touted the state’s economic strength. There was a fiscal 2018 budget surplus of $127 million and the October revenue estimating conference forecast growth this fiscal year, but less growth the following year.

“We never get that kind of assurance,” Richards said. “We hope to work with the Legislature to keep things. We’d prefer to have no cuts.”

Appropriations for fiscal 2020 or any potential need for midyear budget cuts will not be known until the spring legislative session, but Richards expressed confidence in the tuition guidelines that have been laid out.

“… We think everyone can plan on a 3 percent increase and they can follow along how the funding request goes in the Legislature, and then what we’re [seeing] is the HEPI is about 2 percent this year,” he said. “So our upper limits will be 5 percent, somewhere between 3 and 5 percent.” He noted that index could be higher or lower.

The multiyear tuition model stems from summer 2017 Tuition Task Force meetings. The regent universities were asked to provide a calculation of percent increase for tuition that, if they received no state appropriations, would allow the institutions to still follow their strategic plans.

That summer, Harreld reported that in order to fund the UI’s strategic plan with tuition alone would require a consistent 7 percent tuition increase for resident undergraduates every year for the next five years if the UI did not receive state appropriations.

This report didn’t include the internal cost saving the UI is already planning, Harreld said.

The UI will continue to provide a proportion of student financial aid based on merit and need based on how much tuition increases over the next five years, Harreld said.

RELATED: Iowa Board of Regents requesting $20 million boost in state support to universities

In September, the regents requested a $20 million increase of state appropriations for fiscal 2020. These funds would go toward funding resident undergraduate financial aid.

“So, we’re going to use a portion of that money [tuition revenue], to increase the funding for student financial aid, it will also be going up. So we’re very cognizant of the burden this is placing on you,” Harreld said.