The state Board of Regents provided details of the multiyear tuition model at Thursday's meeting, and consistent tuition increases of 3 percent may be on the way for resident undergraduates at the UI and ISU. 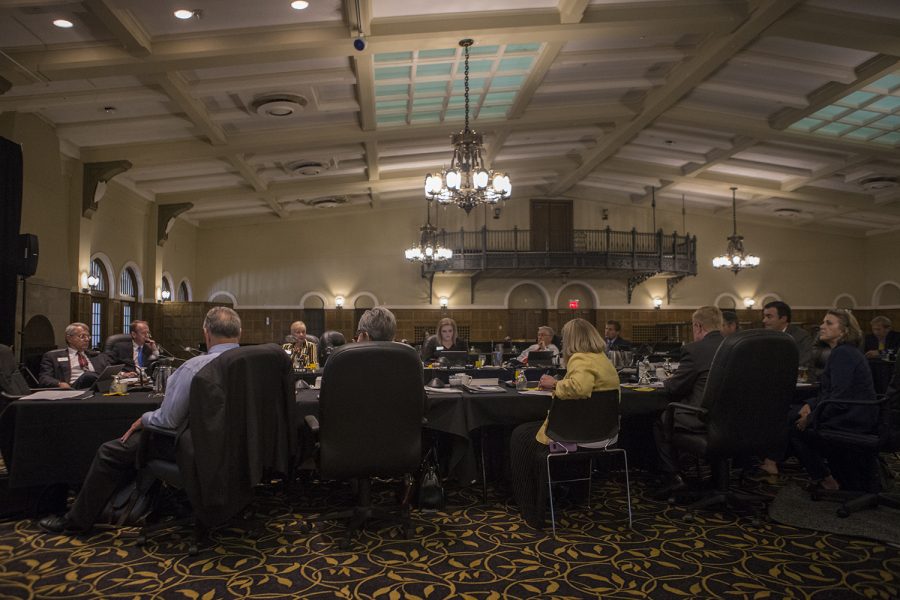 Regents listen during the state Board of Regents meeting on Sept. 12, 2018 in the IMU Main Lounge.

Students attending Iowa’s three public universities governed by the state Board of Regents will likely see tuition increases of about 3 percent each year for five years, depending on state funding levels, the regents announced Thursday.

Regent President Mike Richards provided details at the regents’ Thursday meeting in Cedar Falls of the multiyear tuition model that would lay out a range of tuition increases for students in the next five years.

The model was produced following the regents’ Tuition Task Force conversations during the summer of 2017 in which the regents heard from students that last-minute tuition increases made it difficult to plan their finances.

RELATED: After Tuition Task Force meetings, regents ask: ‘What do we do next?’

The model is not focused on tuition rates for nonresident students, Richards previously said.

The regents will make the University of Northern Iowa more competitively priced with its peer institutions after state appropriation levels are determined, Richards said.

The timeline for discussing tuition will remain the same as it did earlier this year with a first reading in April and a final decision in June, Richards said. He noted this timeline will continue in future years.

This would allow for the state Legislature to determine state appropriations levels for the following fiscal years, which begin July 1 each year, and for the universities to cope with any potential midyear budget cuts that legislators make during the session.

Previously, the regents would give a first reading of tuition rates in October and take a final vote in December. The regents have since strayed from that timeline after midyear budget cuts in fiscal 2017 prompted them to go back on the tuition rate increases they had approved in December 2016, bumping up the 2017-18 academic year rates in June 2017.

“The board’s core mission, above all else, is to maintain the quality of education provided by our public universities and keep them affordable and accessible for every Iowa student who wants to attend,” Richards said.

Compared to past years, Richards said the regents will now focus on looking at tuition revenue, state appropriations, and reallocations in a “holistic” approach to funding the universities because they have different missions, focuses, and programs.

Regent Rachael Johnson, formerly a UNI student currently serving as the sole student regent, said the issue of predictable tuition has been thrown around since before she became a regent.

“Throughout my time, it has been difficult for students with the midyear increases and things of that nature because we didn’t know where state appropriations are,” she said. “I think this provides a concrete proposal to move forward with that students and families can plan for and it will be predictable and it will be to the benefit of all of our students and the universities as a whole.”

Previous student leaders told the regents in April that tuition increases should not be seen as a revenue-generating device, however, as it becomes more difficult for students to afford their education and affects graduation and retention rates.

“As our tuition increases to cover the decreasing contribution of the Legislature, it becomes more difficult for students to afford their education and succeed from the moment they step on campus the first time to the moment they graduate,” former UI Student Government President Jacob Simpson said in April.

Current UISG members did not respond to requests for comment.