Seven UI veterans were honored for their service in the armed forces at the Hawkeye Distinguished Veterans Memorial on Thursday night. 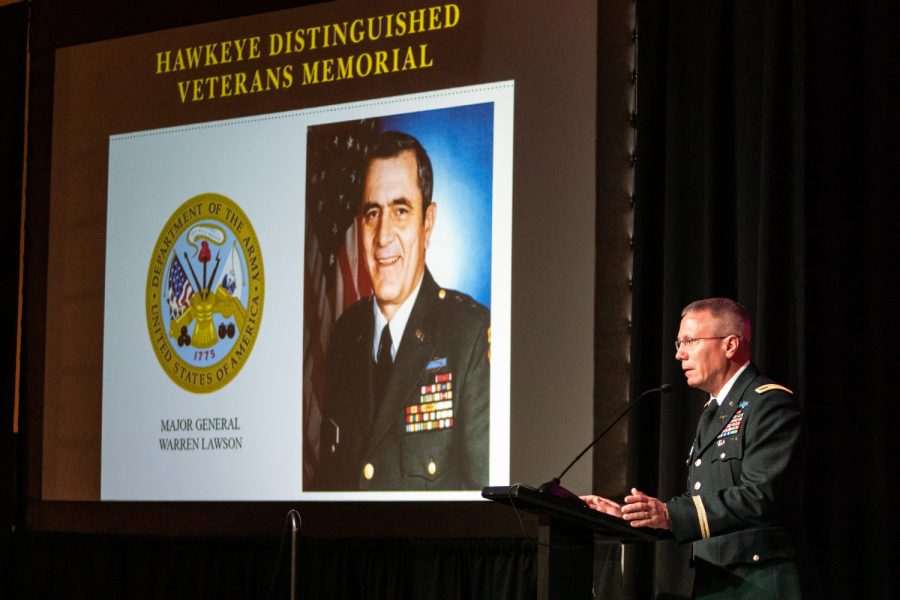 Col. David Nixon of the Iowa Army National Guard receives a Hawkeye Distinguished Veteran's Award on behalf of Maj. Gen. Warren Lawson at the IMU on Thursday, Nov. 15, 2018. Lawson played center for the Iowa football team as an undergrad and was the team's MVP in 1954.

Seven members of the Hawkeye community were honored on Thursday in the IMU for their service in the armed forces at the fourth-annual Hawkeye Distinguished Veterans Memorial.

Though all received the award, their experiences were diverse and their services varied. The honorees served in conflicts from World War I to the war in Afghanistan.

“It’s important to recognize the impacts they have had on the community and enormous sacrifice they have made for our great nation,” Wallace said.

Wallace noted that 2018 marks the 100th anniversary of the end of World War I, and that the IMU was constructed to honor those who served. Attendees had the opportunity to view artifacts from World War I, such as a uniform and various military documents.

A plaque bearing the names of the 2018 inductees will be placed in Hubbard Commons, Wallace said.

There are more than 2,260 veterans, dependents, and active-duty members attending the UI, according to the Military and Veteran Student Services website.

“You can’t appreciate what a great place [Iowa City] is until you travel the rest of the world,” Wallace said.

Daly, a former Army serviceman, is now a UI assistant professor of chemistry. He used his acceptance speech to thank his coworkers.

“Here at the UI, we have some outstanding staff, both veterans and nonveterans,” Daly said. “It’s been my privilege to teach with these outstanding people.”

Crary Bacon, a former UI student, served in the Army Nurse Corps during the invasion of Normandy in World War II.

Hamilton received a law degree from the UI and eventually became the Iowa attorney general.

Former College of Nursing Dean Felton was honored for her service in the Army Nurse Corps. Felton is credited with creating the Ph.D. nursing program at the UI.

A former Hawkeye All-American football player, Lt. Becker was also among those awarded in the ceremony. Becker left the UI to enlist in 1917. He was later killed in action on July 18, 1918.

David Johnson, the grandson of a member of Becker’s unit, accepted the award on Becker’s behalf in place of any surviving family members.

“We couldn’t find any family members at this point, but we’re still looking,” Johnson said. Johnson’s grandfather was wounded in the same battle in which Becker was killed.

Baker-Strothkamp, the president of the Veterans Association at the UI, served two tours in Afghanistan with the U.S. Army. In her current role, she works to help veterans transition back into civilian life at the UI.

“Just the act of showing up and being supportive [can help veterans],” Baker-Strothkamp said. “It’s difficult to transition back to college. Support is deeply needed.”

She is optimistic about the future of veteran support at the UI.

“There’s so much to be done, but we’re making improvements and moving forward each and every day,” Baker-Strothkamp said.