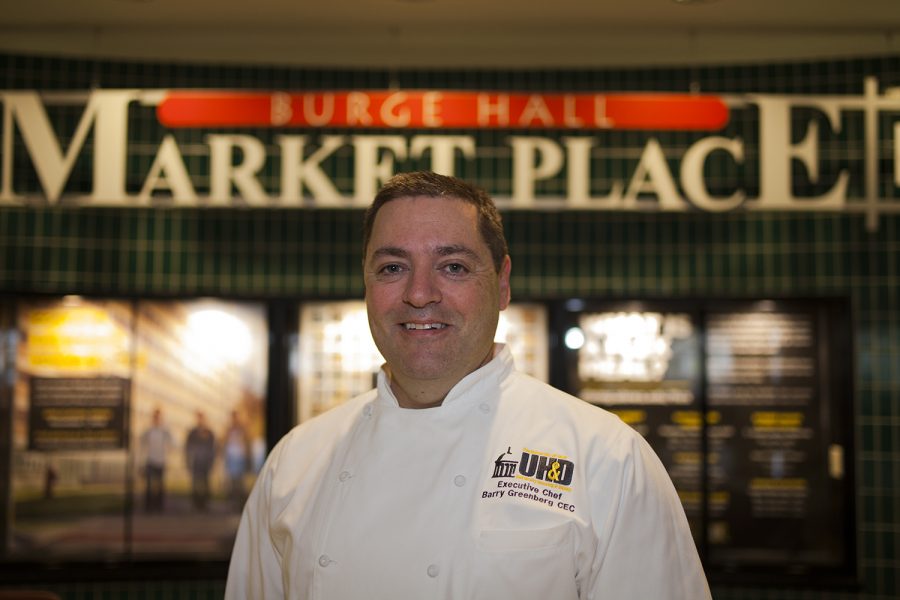 University of Iowa Dining Hall Chef Barry Greenberg poses for a portrait on Monday, Nov. 12, 2018. Barry just won Minor's Flavor Contest and has been rewarded with a trip to France, and $10,000.

A University of Iowa chef put his skills to the test in a national recipe contest and is now tasting sweet success.

Recently, he won first place in Minor’s Flavor Expedition Recipe Contest, taking home the $10,000 grand prize and a trip to watch the b’couse d’or live cooking competition — a competition he called “the major leagues of professional cooking” — in Lyons, France, in January.

Minor’s, a food company, challenged chefs to create an original recipe using Minor’s products. Greenberg won the award for his pork carnitas tarts recipe, a dish using a corn husk tart base and pork carnita meat, topped with sauce, fresh corn, pumpkin seeds, and cilantro. In a press release, Minor’s said the dish won because of its bold flavors and imagination.

Originally from Connecticut, Greenberg found his passion for cooking working as a busboy at a local restaurant while in high school. He has worked at the UI for 26 years and said he uses skills learned on the job to help him succeed in competition.

“I do these recipe contests for fun, basically. It’s a good opportunity to keep your skills sharp,” Greenberg said. “I write recipes here quite a bit, so I’m used to the process. I know logically what’s going to work and what’s not, so I’ve been successful.”

Fresh flavors and current trends are central to Greenberg’s recipe development, he said.

“I usually get my ideas from things I’ve either seen or eaten before, or that I’ve read about,” he said. “It kind of depends on what I’m in the mood for when I’m developing a recipe. I happened to be cooking pork that week that I was developing that recipe, and fresh corn was really popular when the recipe was due, so I had a lot of fresh corn flavor in there.”

Greenberg isn’t the only member of the UI’s culinary staff entering competitions. Several other UI chefs try their hands as well, competing as a team in the annual Riverside Culinary Classic and Top Chef Iowa City.

“[Competition] is always an opportunity to flex your creative muscles when no one’s telling you what you have to make, with no money limitations or dietary limitations,” she said.

“The fact that we’re able to do that with the support of our department is great,” he said. “That ability to try new things and expand our own horizons and boundaries are what we’re always looking for.”

Greenberg said he has no plans of slowing down anytime soon.

“I never say no to a competition,” he said. “… Anytime you’re around other competitors and other professional chefs, it’s always valuable.”