Livia Jackson has cyclic vomiting syndrome, which means certain triggers can result in a vomit episode that could last hours. 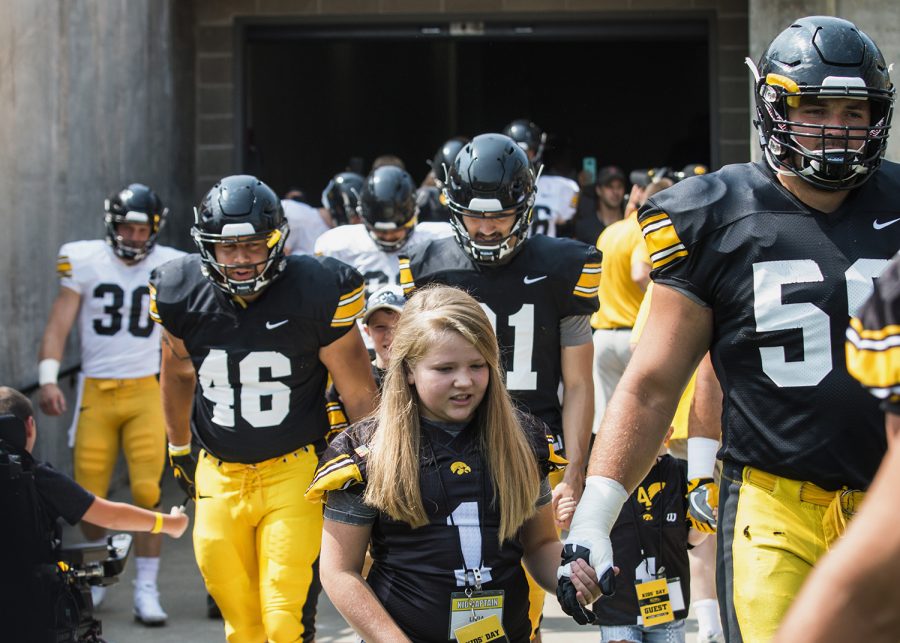 A multitude of tests resulted in no answers for the Jackson family about why Livia Jackson had episodes of extreme vomiting.

It wasn’t until Livia came to the University of Iowa Stead Family Children’s Hospital that she was diagnosed with cyclic vomiting syndrome, which means she may vomit numerous times per hour during episodes.

Livia, an 11-year-old from Glenwood, Iowa, is this week’s Kid Captain for the Iowa football game against Illinois on Saturday.

“We’re so grateful for everything [the Children’s Hospital] has done for us,” mother Holly Jackson said. “They helped us get our lives back.”

Before finding out Livia’s diagnosis, she said, doctors thought she might have a sensitive gag reflex and removed her tonsils when she was 2 years old.

When Livia was 5, she underwent a four-hour dental surgery, because frequent vomiting took the enamel from her teeth.

In cyclic vomiting syndrome cases, Holly said, there are calendar kids, who can’t prevent their episodes but know when they’re coming, and trigger kids, such as Livia.

Her triggers include the smell of garlic, Holly said, so an episode may happen after simply walking into an Olive Garden.

Her episodes can also be caused by over-excitement. Holly said Livia struggled throughout kindergarten with vomiting, because everything was so new and prompted an episode.

“We couldn’t have a birthday party for her until she was 9,” Holly said. “She would just get so excited.”

Leah Zhorne, the Stead Family Children’s Hospital director of child neurology residency program, has been seeing Livia since she first came to the hospital. She said in cases such as Livia’s, listening to the child and the family to figure out what’s going on is instrumental.

Avoiding triggers is the best way to preventing vomiting spells if possible, she said, but this isn’t a realistic way of treatment.

Despite having to deal with the syndrome, Zhorne said, Livia has maintained a wonderful, big personality and is involved in many things at school, including 4-H and school plays.

“No matter what’s going on in their lives, [kids] always manage to find the positive,” she said.

One positive part of Livia’s experience has been during Kinnick Kids Day, in which the whole Jackson family — including Livia’s father, Jonathan, and her three siblings, Lacey, Maxton, and Maverick — got to travel and meet other Kid Captain families.

Livia also decided to deliver items to the Child Life Program at the hospital for kids to use in honor of her Kid Captain week, Holly said.

Homecoming week was also a wonderful experience for the Jackson family, she said. The theme of the halftime show was heroes, she said, and all the Kid Captains were presented on the field.

“Every time I watch it, I still get chills and tear up a bit,” Holly said. “The experience is something we will never forget.”

Livia said her favorite part was being in the parade and meeting all of the other Kid Captains. She also was excited to meet a few Hawkeye football players and loved hearing the stadium cheer for the Kid Captains.

“Kid Captain has been good, because it helps me to know other people care, not just your family that is there for you every day,” she said.