Movie about Nile Kinnick hopes to première in namesake stadium

Iowa football has become one with Nile Kinnick’s name. A new film, “The Ironmen,” will chronicle the players and coaches who served in World War II. 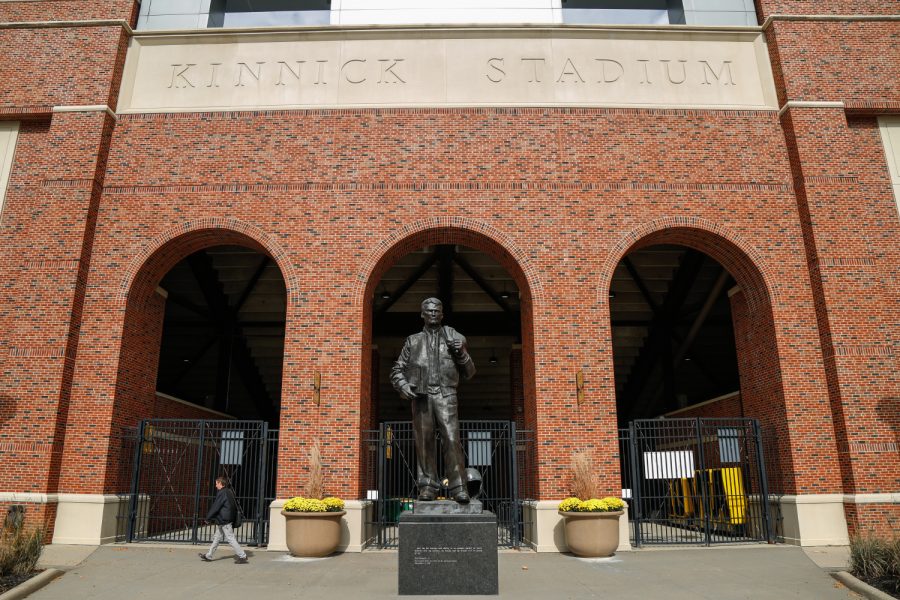 University of Iowa's Kinnick Stadium on Stadium Drive on Wednesday, Oct. 19, 2016. The University of Iowa is considering spending $100,000 to renovate a portion of the stadium. (The Daily Iowan/Anthony Vazquez)

For many Iowans, football is synonymous with the name Nile Kinnick, and soon his story will appear on the big screen.

Before his premature death in 1943, Kinnick won the Heisman Trophy (only Hawkeye to do so) and established himself as a leader on and off the field. Thanks to a script penned by an Oscar-nominated UI graduate, Kinnick’s story is headed to the big screen.

The Ironmen, which chronicles the lives of the Hawkeyes who served in World War II, was written by Iowa writer Tom Lidd and tweaked by Nicholas Meyer, a UI alum who was nominated for an Oscar for his work on Star Trek II: The Wrath of Khan.

RELATED: The Hawkeye Express: An intrinsic part of the game-day experience

“When I started in the film business, this is something that I always wanted to do,” producer Joe Heath said. “I’ve been pitching it and trying to get it made since 2006 — I guess the big kick-starter that really got the film moving forward was the university working with us to get the première in the stadium.”

Through discussions with the UI, the opening of the film will be held at Kinnick Stadium, with a tangential goal of breaking the world record for a film début’s attendance.

“I was walking by the stadium in 2011 when they were installing the new JumboTron on the south end zone … I thought, You know, Hawkeye fans can beat the [attendance] record,” Heath said.

Aside from breaking records, Heath said, there will be a number of messages at the heart of the film.

“We’re in this politically charged atmosphere, and I think [the film] will kind of bring people back to the ground and realize that we don’t have it as bad as we think; you know we’re not thinking about shipping off into World War II anytime soon,” Heath said. “And Nile Kinnick, the man he was, was just kind of this selfless figure and there are some lost qualities in there that I think people will see and hopefully appreciate.”

These qualities also resonated with former Associate Athletics Director Mark Jennings, who said he looks forward to the film’s release.

“The values that he had are the values that Iowans still have — if you look at what we’re doing today like The Wave, that’s something that Nile Kinnick would have been involved with here,” he said.

Jennings said people such as Kinnick define generations of Iowans, and he hopes that the Ironmen story will inspire future generations as well.

“There’s so much history with Nile Kinnick beyond football, and his name now is on the stadium,” Jennings said. “He chose to give up going into the NFL to serve his country and died there. His grandpa was the governor of Iowa, so he was destined to be a leader in the state.”

Although the film hasn’t started production yet, Producer Matt Zboyovski said they plan on using as many Iowa City residents as possible because it is “an Iowa story, after all.”

“We really look forward to having the Hawkeye students, alumni, and community involved in this project,” he said.