UI student Brendan Higgins details the inspirations that led him to form the band Waverly with his friends. 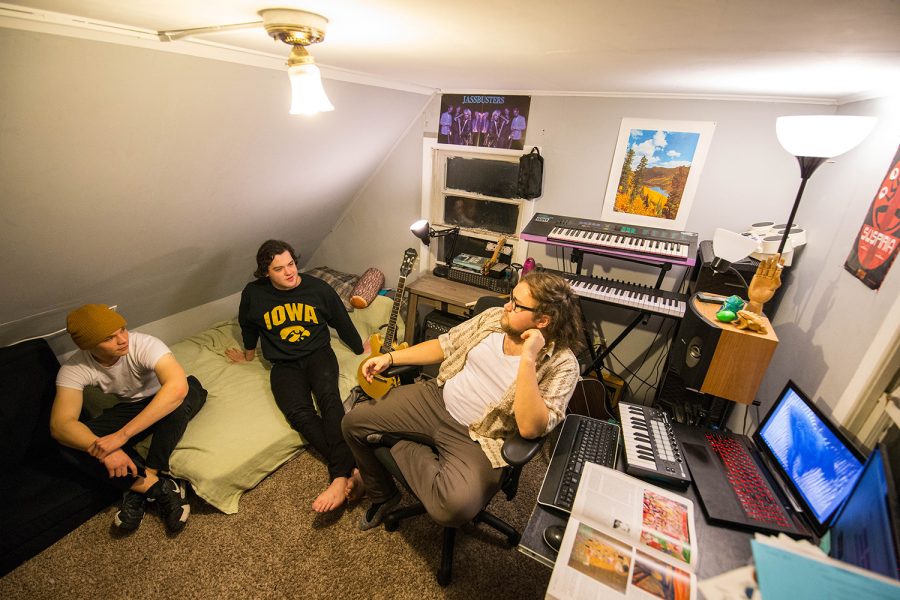 The psychedelic rock band Waverly as seen in the space where they produce their music. From left, Brendan and Ethan hang out in Iowa City on Nov. 13, 2018.

A typical band has each member play a specific instrument. Local band Waverly, however, is a four-man group of jacks-of-all trades. University of Iowa senior Brendan Higgins describes what his band is like while he drives a fork through hot-sauce-covered quiche.

Waverly formed two years ago in the dead of July, and each track the members create is filled with variety.

“We play different instruments on each of the tracks,” Higgins said. “We all wrote the chords and lyrics to two or three songs and came together to flesh them out. It’s like musical chairs with instruments instead of chairs.”

The band’s influences come from contemporary psychedelic bands such as Tame Impala, MGMT, and Pond.

“We listen to people who are just trying to do different things,” Higgins said. “Just people that experiment with traditional song structures. Pond is this Australian psych-rock band that is a conglomeration of different musicians who would switch off different instruments. We were like, ‘Hey, if they can do that, so can others’.”

A musician, writer, and member of Student Video Productions, Higgins describes his creativity as cathartic in all of the media in which he works.

“If you’re writing something, it can stem from something personal,” he said. “It’s the same with music. It’s a way for me to be in a state of expressive freedom that I’m not normally in.”

To him, playing music with his bandmates is also a way to connect through mutual states of mind.

“Whatever state of minds we’re in, whatever our emotions are like at this point, wherever we are in the spectrum of emotion,” Higgins said. “We just align in this one space through sound.”

His first instrument was the clarinet.

“What inspired me to join band in fourth grade was Squidward from Spongebob Squarepants,” he said. “When all of the students went to band they were like, ‘Hey, here’s a bunch of instruments; you want to learn something?’ I said I wanted to learn the clarinet and be like Squidward.”

Though Higgins quit clarinet a year later, the following exposure to music enabled him to switch to percussion and the school band, eventually leading him to play drums in his middle-school jazz band. He later took part in many jam sessions and a band in high school called Kastaway before playing piano and other instruments with Waverly.

Waverly’s album, Fledgling, was released last year, and the band will produce tracks that are vastly different compared with the début.

“It’s a bit more upbeat, more electronic bass and fewer guitars,” Higgins said. “Makes you want to dance. Imagine that the whole world is on fire. Except there’s one thing that’s not on fire right now. And that’s the DJ. He’s just playing this song, and you’re like, ‘Oh man, the world’s on fire, and we’re all going to die,’ and you notice this DJ and you’re like, ‘Wait a second … I can dance.’ ”