Jaimes: Two women made history Nov. 6; only one received national attention for it.

Successful candidates in last week’s election prove that America is attracted to candidates who did not run on polarized platforms. 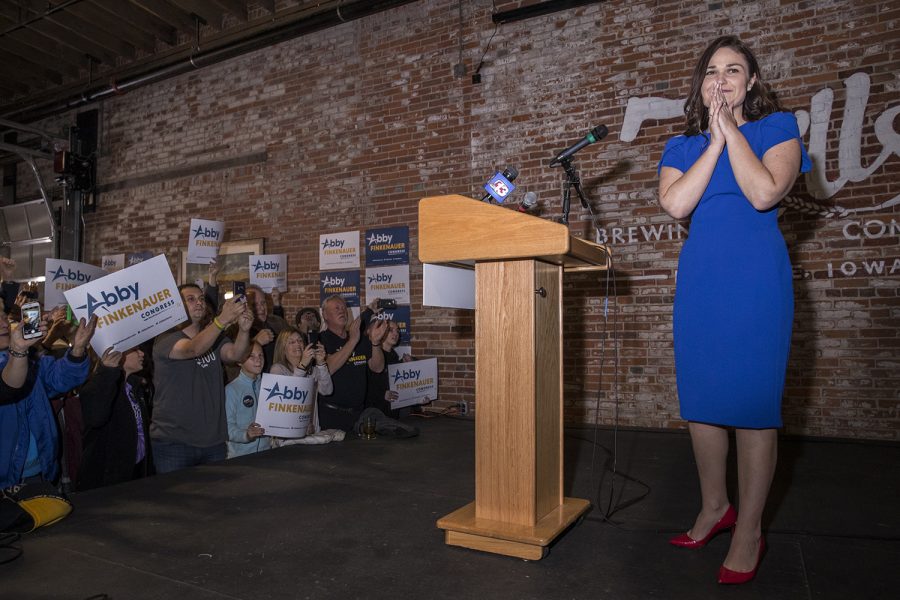 Democratic candidate for Iowa’s first congressional district Abby Finkenauer is greeted by supporters during a watch party at 7 Hills Brewing Company in Dubuque, Iowa on Tuesday Nov. 6, 2018. Finkenauer defeated incumbent Republican Rod Blum and, along with Alexandria Ocasio-Cortez, NY-14, becomes one of the first women under 30 elected to the U.S. House of Representatives.

On Nov. 6, both Abby Finkenauer of Iowa and Alexandria Ocasio-Cortez of New York made history by becoming two of the youngest women to be elected to the U.S. House of Representatives. At 29 years old, two Democratic women proved that they were ready to fight for the values of their constituents. The difference? One earned her place through a stellar résumé and relentless work. The other tested norms on how far left Democrats were willing to go.

Finkenauer, who has been overshadowed by a news cycle focused on a proud Democratic-Socialist, also became one of the first two women to represent Iowa in the House of Representatives. It was not an easy feat, but Finkenauer managed to turn a red district blue by unseating incumbent Republican Rod Blum.

She is proof that sensible Democratic candidates do not appeal to media focused on showcasing candidates with agendas polar opposite to the Republican-led executive branch.

Finkenauer got her start in politics as a page for Republican Jim Nussle, a Republican representative for the district. After gaining experience, Finkenauer decided to run on her own and was elected to the Iowa House of Representatives and again in 2016. She announced her run for U.S. House in May 2017 and was successful in getting the attention of voters.

Ocasio-Cortez rose to fame when she defeated incumbent Rep. Joe Crowley in the New York Democratic primaries. She is a member of the Democratic Socialists of America and made headlines as the bartender from the Bronx ready to take on Congress.

Before her spot in Congress was secured, Ocasio-Cortez knew she would be victorious in her race. All of America was confident in her victory, as her district was historically Democratic in a known blue state of America. Ocasio-Cortez was able to campaign such a miniscule amount that she spent time in other parts of the country to work for other Democratic candidates; her seat was hardly earned. Even before her election in 2018, she campaigned on behalf of Kansas Democrat James Thompson.

It seems that left-leaning media have an article praising Ocasio-Cortez every day, but right-leaning sources also have breaking news on her, usually referring to something she has said that lacks knowledge. Her background in economics and international relations from Boston University could not help her answer why she refers to Israel as the occupier of Palestine, to which she answered that she was not an expert in geopolitics. Even as of midterm elections, Ocasio-Cortez was still unable to explain how she would fund all of the programs she was promising, despite numerous opportunities to provide an answer.

There’s a reason candidates such as Ocasio-Cortez overshadow those such as Finkenauer. Finkenauer, who has championed bipartisanship and civility as a campaign promise, is not radical enough to gain national attention. Even though “overcoming polarization” is the solution to every question on today’s political climate, both left and right only showcase the worst to offer even though candidates such as Finkenauer have proved that they can flip seats.

If Democrats hope for another blue wave in 2020, they should prioritize moderate candidates and take responsibility for the polarization they’ve pinned against President Trump.