In thrift we trust: thrift culture in Iowa City

A peek into Iowa City’s thrift culture, shopping for bargains and sauntering off the beaten path of fashion. 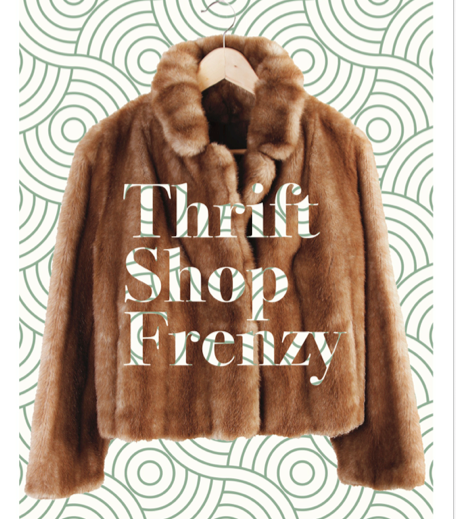 A faded navy-blue Marc Anthony sweater for only 99 cents, a Tommy Hilfiger jacket originally $40 now practically free, or maybe a 1980s racquetball tournament T-shirt from Pennsylvania. Hidden on chaotic clothes lines are secret wonders. From ripped flannels to old jeans, practically anything can be found in an Iowa City thrift store.

With such shops as Goodwill, Salvation Army, Ragstock, Revival, Savvy Boutique, Stuff Etc., Second Act, and Crowded Closet at their disposal, thrift shopping is an available option for University of Iowa students and many other members of the community.

There are a variety of reasons people practice thrift. Some do it for moral and environmental reasons, and many more just want to make that super-cheap, one-of-a-kind find to add to their wardrobe.

UI freshman Sophie Selk seems to be a seasoned veteran when it comes to being thrifty, and she even makes her own clothes from her finds.

“I shop both in Goodwill and Stuff Etc.,” she said. “A lot of times, I get big sheets of fabric in the linen section, and I use that for making skirts and sewing my own stuff, along with embroidering sweaters I find. It’s very rewarding to finish up my creations.”

A majority of Selk’s closet consists of clothes altered by her design. It contains customized pieces, the majority of which were initially thrifty purchases.

“I get almost all my clothes from thrift stores,” Selk said. “Anything with a midseam, like T-shirts and stuff, you can always cut and resew, which is something I think people should be more into. It’s not scary at all to sew and do your own work.”

Selk said muumuus can be easily found at thrift stores and provide a lot of fabric to create a new item.

“You can make skirts out of them; headbands, you can cut them up,” she said. “It’s a lot cheaper and better for the environment, and there’s nothing wrong with these clothes. It’s dope as hell and very rewarding.”

To create her original pieces, Selk first traces lines with chalk where she wants to cut. She often ends up slicing off the sleeves of T-shirts. She then trims more, making it a crop top and using the excess fabric as a matching headband.

“I like turning free T-shirts into ‘THOT’ T-shirts,” Selk said. “If you get a free T-shirt, cut it up. That’s what I did to my On Iowa T-shirt.”

With a T-shirt turned crop top, Selk then throws on a jean jacket, and now wears an outfit no one could purchase on the shelves.

The resale industry is on the rise. According to a 2018 report from Thredup, resale distributors grew by 49 percent from 2017 to 2018, which is 24 times faster than retail. Almost half of the resale market is made up of clothing and apparel, or in other words, thrift.

Sheila Davisson, owner of Revival, gave a few reasons as to why the resale industry is so successful in Iowa City.

“A college town has always been very open to the idea. There’s always been a lot more attention given to how you’re shopping and the choices you’re making; it’s a community that really supports that,” Davisson said. “They’re also in a stage of life where they’re honing their style and trying different things out, and thrift is  great way to do that.”

Revival offers resale, vintage, and new clothes. According to Davisson, her store buys new clothing that is ethical and sustainable, but also a good price. She said Revival is trying to cut back on supporting fast fashion.

Davisson also said the constant movement among college students contributes to the popularity of thrift and resale.

Walking into the Iowa City Goodwill, racks and racks of clothing, some seemingly ancient and others relatively new, hang in rows, each marked with a colored tag, indicating if the fabric is on sale or not. Most all pieces are under $10, and brand-name clothing will often slip in between lesser known brands.

Selk said she uses the store to get clothing basics for a low price.

“If you need a black camisole, if you need a gray cardigan, like the things that every woman should own, being thrifty could be the best way for that,” she said.

In the middle of downtown, in Ragstock, customers browse the selection of funkily patterned button-down T-shirts and various rainbow-colored accessories.

On a hunt for some new regalia to add to the wardrobe, UI freshman Simon Reichel, who considers himself to be a novice thrift shopper, scoped the racks of the shop.

“Most of its clothes look pretty thrifty, but a lot of [Ragstock] is also really ‘high-end fashion’ right now. The costs are not thrift-friendly for people who are being thrifty,” he said. “$6, that’s great, and then you’ve got this $30 pair of overalls. What? It’s so sad.”

Reichel ended up purchasing a pair of gold and white striped dress pants. For $15, he described the price as “reasonable-ish.”

Fast fashion, the rapid turnover of styles and different clothing lines from popular chains, can pose human-rights risks. Clothing that is produced quickly and sold at low prices is often made in countries with less restrictions and regulations on working conditions.

Following the building collapse, the organization Fashion Revolution began, advocating for changes in the fashion industry, including focusing on protecting workers and compensating them fairly.

Fashion can also have environmental effects. According to a June report from the U.N. Environment Program, fashion is responsible for 92 million tons of waste going into landfills each year and is the second-largest consumer of water among industries.

UI junior Sal Goedken uses a capsule wardrobe, owning a limited amount of clothing to combine into a variety of outfits.

“I only own a very small number of articles of clothing,” Goedken said. “They’re all staple pieces that you can mix and match, and then every three months, I replace them.”

When replacing her clothes, she usually donates or sells her old ones and replenishes her wardrobe by online thrifty shopping. The focus of her capsule wardrobe revolves around clothing that is ethically produced, she said.

“A lot of people who make clothes for fast fashion are not paid enough,” she said. “Their working conditions are terrible — often they get very sick from working with certain chemicals. Sometimes, they literally die because conditions are so poor. Thrifty shopping is a great way to not actively contribute to fast fashion.”

“I am interested in feeling good about myself and feeling confident,” she said. “To me, confidence doesn’t have a season or certain style, it’s whatever I think will make me feel really good about myself when I wear it. I haven’t owned a plain white T-shirt, [in] like, ever. I’m just a bit more eccentric than that; I’m a bit more vibrant.”