The UI seeking approval from the Board of Regents to award two honorary degrees to Mary Sue Coleman and Ellen R. Stofan. 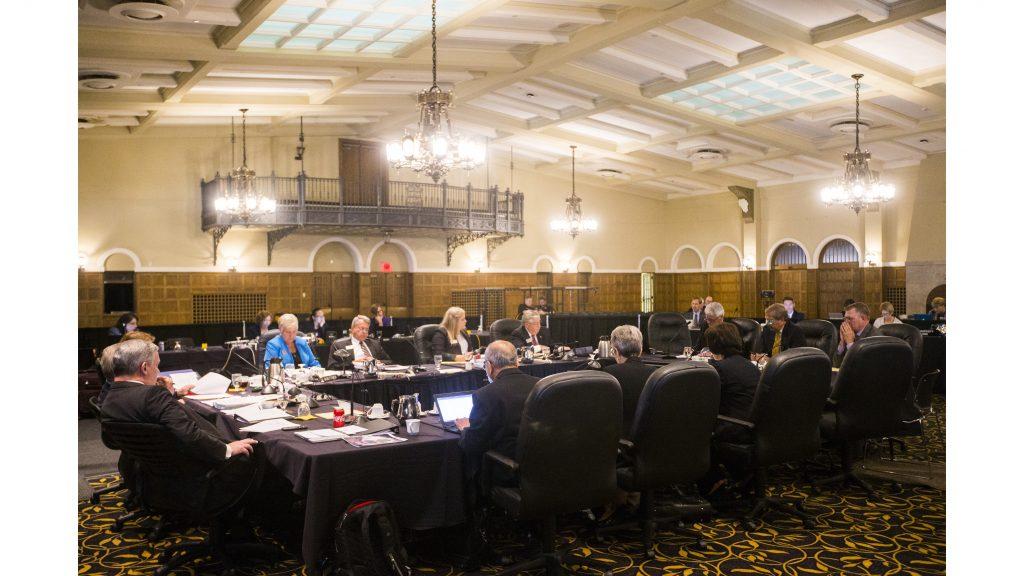 Regents listen to a presentation during a state Board of Regents meeting in the IMU main lounge on Thursday, Sept. 7, 2017.

During her tenure at the UI, she expanded the health sciences, enhanced the UI’s writing program, and supported women scholars and athletes. She contributed to Iowa City becoming a UNESCO City of Literature, as well as helped make the “Good. Better. Best. Iowa.” capital campaign a success, raising $1 billion for the campaign.

Coleman has also provided support for UI students through the establishment of the Kenneth and Mary Sue Coleman Presidential Scholarship.

Stofan was the first woman chosen to lead the Smithsonian National Air and Space Museum in 2018. She currently co-chairs the World Economic Forum’s Council on the Future of Space Technologies.

She has had a career as a planetary scientist and as an advocate for public engagement in space science and for STEM field diversity. She has received the Presidential Early Career Award for Scientists and Engineers, as well as the NASA Distinguished Service Medal.

Stofan has worked closely with the UI Department of Physics and Astronomy as an associate member of Cassini Mission to Saturn Radar Team and an investigator on the Mars Express Mission’s MARSIS sounder. She spoke at the UI in spring 2018 through the Lecture Committee.