A Coralville woman’s heart was saved right in her hometown with a recent advancement at the UI Heart and Vascular Center. 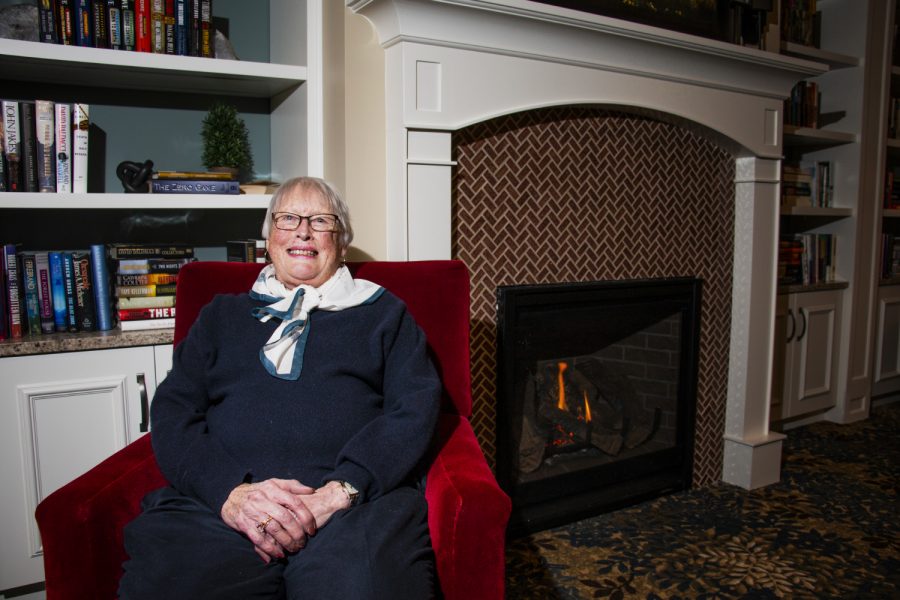 77-year-old Jan Wicks poses for a portrait at the Grand Living in Coralville on Thursday, November 8, 2018. Wicks was the first Iowan to undergo a tricuspid valve procedure.

Seventy-seven-year-old Jan Wicks recently became the first Iowan to undergo a tricuspid valve procedure without having open-heart surgery, thanks to the latest technology available at the University of Iowa Heart and Vascular Center.

Wicks lives in Coralville with her husband, Al. After being diagnosed with tricuspid regurgitation, a condition in which the heart’s tricuspid valve becomes “leaky” and allows blood to flow back into the atrium, she said she felt hopeless.

Tricuspid regurgitation, Horwitz and Bashir said, can be caused after one of a variety of diseases damages the valve. Among other effects, it can cause shortness of breath, excess of fluid inside the body, painful swelling, and heart failure.

Horwitz said that, traditionally, the tricuspid valve can be repaired with open-heart surgery. However, because of her age, Wicks did not qualify for such a surgery.

“I was very depressed,” Wicks said. “I was at a point where I didn’t think I could live until Christmas.”

Horwitz said he, Bashir, and El Accaoui have all performed a number of “catheter-based procedures” in which they are able to repair or replace various valves in the heart with catheters in minimally invasive procedures that do not require open-heart surgery.

One device often used during these procedures — a clip designed to fix the mitral valve in the heart — led the team to an opportunity, Horwitz said.

“The tricuspid valve, while some things are in development, does not yet have a specific device that’s designed for it,” he said. “So we adapted a device called the mitra clip, which is designed to fix the mitral valve and we used it to fix [Wick’s] tricuspid valve. We were able to put these clips on the valve to reduce the leakiness.”

Without the adaptation, Wicks said, she would have been transferred to Northwestern in Illinois, the closest medical institution with such a device readily available.

“A few years ago someone like this would have no options,” Horwitz said. “The advancing technology and advancing expertise of the people using the technology are basically going to allow us to treat a lot of folks, make them feel better, reduce their time in the hospital, [and reduce] the medications that they require in a way that we would have never been able to do a few years ago.”

Wicks said that when Horwitz approached her with the option, her hope was renewed, though she admitted feeling a little nervous when she learned she’d be the first patient on whom the particular procedure was attempted.

“We knew it was experimental, but she didn’t know she was No. 1,” Wicks’ husband, Al, said.

Today, Wicks is undergoing a minimal recovery process in Coralville thanks to the procedure. She said she is quite thankful for the kindness of her physicians and how well the entire process was explained to her.

“It’s like a second lease on life, it really is,” she said.