The problem with the poverty percentage increase is less about how Iowa City looks with statistics splayed out and more about what is better for students who double as Iowa City residents. 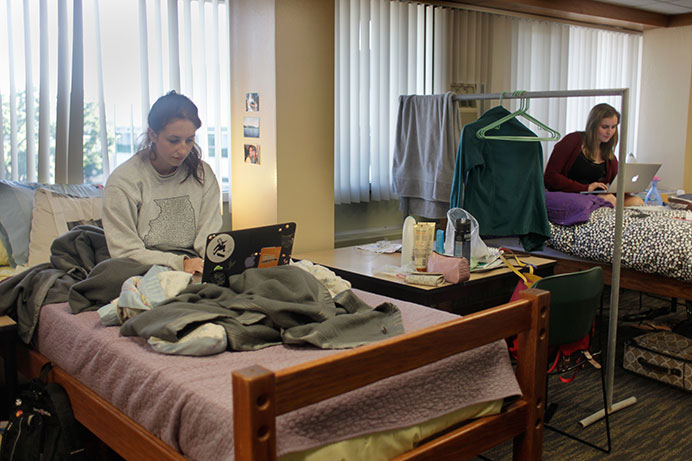 UI junior Olivia Loechner and freshman Sydney McMurray sit in a UI dorm lounge they share with three other women on Monday, Aug. 24, 2015. An overflow of students stay in residence-hall lounges converted into housing spaces until permanent accommodations can be made. (The Daily Iowan/Carly Matthew)

November arrived with an array of decisions to make — enrolling in classes for spring semester, prepping for the holidays, and planning for a place to live next August. Looking over leases, then signing, scribbling signatures across line after line. There is an indescribable pressure to move quickly in making all these plans. And lately, there has been specific pressure placed on students to  live on campus a second year.

When students move yonder and step away from on-campus living and into house or apartment leases, there is a significant spike in the community’s poverty statistics. With a number of reasons rising to meet this observation, the reality remains: College students living off campus make statistically significant differences in the number of people living in poverty in their community.

According to the U.S. Census Bureau, as many as 211 counties see poverty rates pushed up when off-campus students are counted. And some communities see as much as a 10 percent increase in poverty rates. Among these communities: Iowa City.

With 14 percent more than the average population living below the poverty line, Iowa City’s largest demographics living in poverty are men and women between the ages 18 and 24. Because the Census Bureau uses a set of money income thresholds that differ depending on family size to measure who classifies as living in poverty, it’s easy to lump in students living off-campus.

“If the family’s total income is less than the family’s threshold, then that family and every individual in it is considered to be living in poverty,” DATA USA reported.

But the problem with this information is less about how Iowa City looks with statistics splayed out and more about what is better for students who are Iowa City residents, both undergraduate and graduate students. There shouldn’t be pressure to stay on-campus for students’ second year at the Univesity of Iowa, living in the dorms, when it costs thousands of dollars more.

With students living on-campus left out of the demographic, the extent of men and women ages 18 to 24 living in poverty in Iowa City is cushioned. Because, if first- or second-year UI students still living on campus were considered, the population of people living below the poverty line in Iowa City would be even larger — because of the cost of living.

Living in a double room, in any of the UI residence halls, costs more than $3,000 a semester, which is not even a full five months per student.

Meanwhile, finding a two-bedroom apartment off campus can cost anywhere between $750 to a little more than $1,000 a month. Split between two roommates, that is less than $500 a month.

Life in residence halls comes at a crippling cost to students, and more often than not, students are taking up limited space in the dorm rooms. If college students are going to be counted in poverty percentages, then at least we can be presented with the options best suited for us in our search for space.