Is shared governance lacking at the UI? Faculty hold forum to answer question

The campus community discussed a perceived lack of shared governance in recent impactful decisions such as the Labor Center closure at a forum Tuesday night. 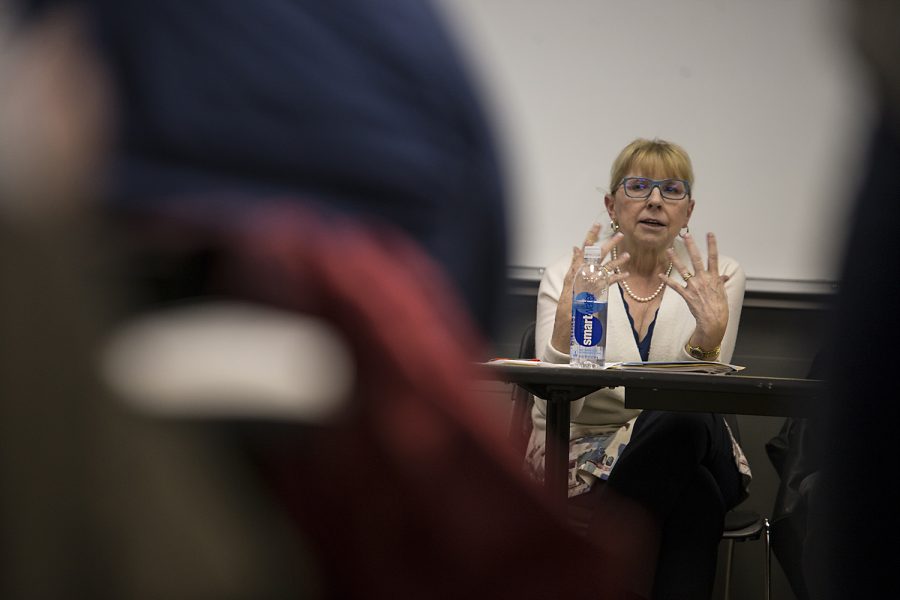 Ann Rhodes, clinical Professor of Nursing and former UI administrator, addresses the audience during the American Association of University Professors forum in the IMU on Tuesday, Nov. 13, 2018. Panelists discussed shared governance at the university in decision-making processes.

The state of shared governance and whether it’s in crisis at the University of Iowa was called into question at a forum Tuesday night.

The UI chapter of the American Association of University Professors and Iowans for Public Education hosted a forum Tuesday to address concerns about whether the UI is abandoning long standing academic standards for shared governance following the UI’s  proposal to close the Labor Center.

In response to concerns faculty have raised that the decision lacked faculty involvement, UI President Bruce Harreld said in an October interview with The Daily Iowan that faculty had last reviewed the centers and identified which should be closed in 2004 and updated that list around 2009.

When the need for budget cuts arose close to the end of fiscal 2018, he said, there was little time to step back and engage in further study.

“I would remind all of my colleagues on campus that I passionately believe in shared governance,” Harreld said. “Shared governance does not mean shared decision-making. It’s something different I made a decision. I take responsibility for it. I understand their angst, I’m as frustrated as they are.”

Former UI Vice President for University Relations Ann Rhodes, one of the panelists, said strong leadership relies on shared governance with people involved in the core mission of universities, such as the staff and faculty who teach the scholars.

“There’s never been enough money to do everything we want to,” Rhodes said. “There are things the university has to do that don’t make money, but we do it because it’s something we have to in the best interest of the students.”

Regarding student involvement in administrative decisions and complaints by the Save Our Labor Center coalition that administrators didn’t meet with the group, Rhodes said that recent efforts by the administration to ignore student concerns seems disrespectful.

The AAUP sanctioned the UI in 2016 for violating these guidelines in the 2015 presidential search that resulted in Harreld’s hiring. The sanction was lifted in June after the organization determined the UI had improved shared governance since that time.

RELATED: UISG will not back UI Labor Center closure

Common concerns expressed by those in attendance at the forum included a perceived tendency towards elitism by the UI administration and Harreld’s past as a businessman, among other matters.

UI AAUP Committee A Chair and Clinical Professor Lois Cox said the perceived lack of shared governance at the UI is indeed visible in more than just the closing of centers across campus. The latter is a primary concern, and will come to vote at this week’s state Board of Regents meeting.

“There have been resolutions passed, students organizing, discussions among the Board of Regents, and yet I don’t see any willingness by the UI administration to rethink this decision, and I’m puzzled by it,” Cox said. “I think it’s safe to say we’re in this issue for the long run.”