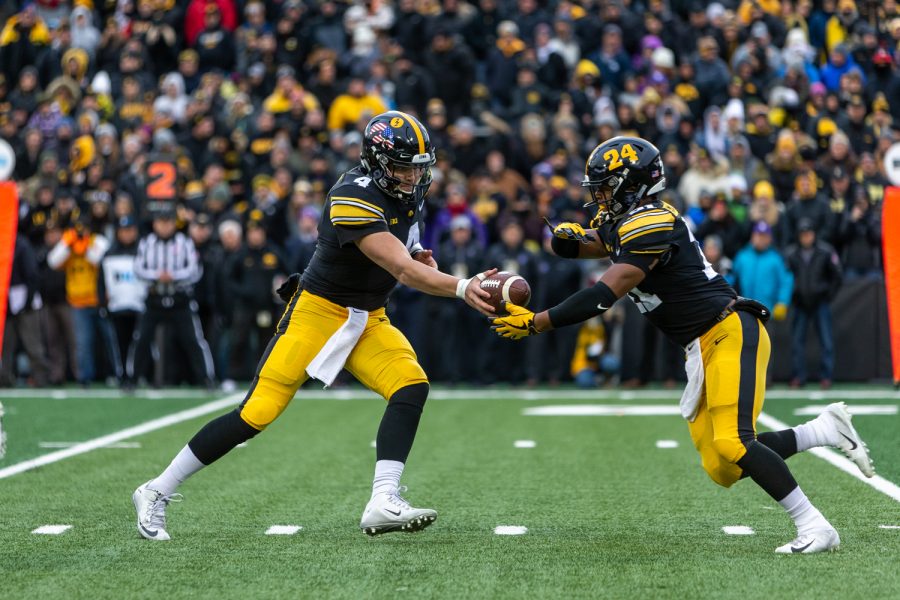 Iowa quarterback Nate Stanley (4) hands off to Iowa running back Ivory Kelly-Martin (21) during a game against Northwestern University on Saturday, Nov. 10, 2018 at Kinnick Stadium. The Wildcats defeated the Hawkeyes 14-10.

This offense has been inconsistent all season, and the Nov. 10 game was a prime example of that.

Iowa had a two-play touchdown drive in the third quarter, and it looked like the offense might start to pull away. But that notion quickly faded.

The Hawkeye offense had four three-and-outs, despite starting all 13 possessions with an average field position of the Iowa 31-yard line.

Northwestern was giving up nearly 25 points per game heading into Kinnick, but Iowa couldn’t even score half of that.

Throw in a pair of fumbles and just 64 rushing yards for good measure.

Iowa’s defense could only do so much to cover for the offense on Nov. 10.

Two interceptions, one by Geno Stone and the other by Jake Gervase, were positives, and so were Iowa’s 2 sacks.

But the Hawkeyes just could not stop Northwestern’s ground game. Wildcat running back Isaiah Bowser torched the Iowa defense for 165 yards and a touchdown on 31 carries, averaging 5.3 yards per touch.

Punter Colten Rastetter struggled on his seven punt attempts, averaging 34.9 yards per kick — his lowest single-game average of the season.

The lone bright spot was Ihmir Smith-Marsette, who gained 100 yards on 3 returns. His longest was 41 yards, and each time he returned a kick, he set Iowa up with prime field position.