The Kid Captain for Iowa’s game against Northwestern is Mason Gonzalez, a 7-year-old from Jesup, Iowa. He has Angelman syndrome, a disorder characterized by frequent laughter. 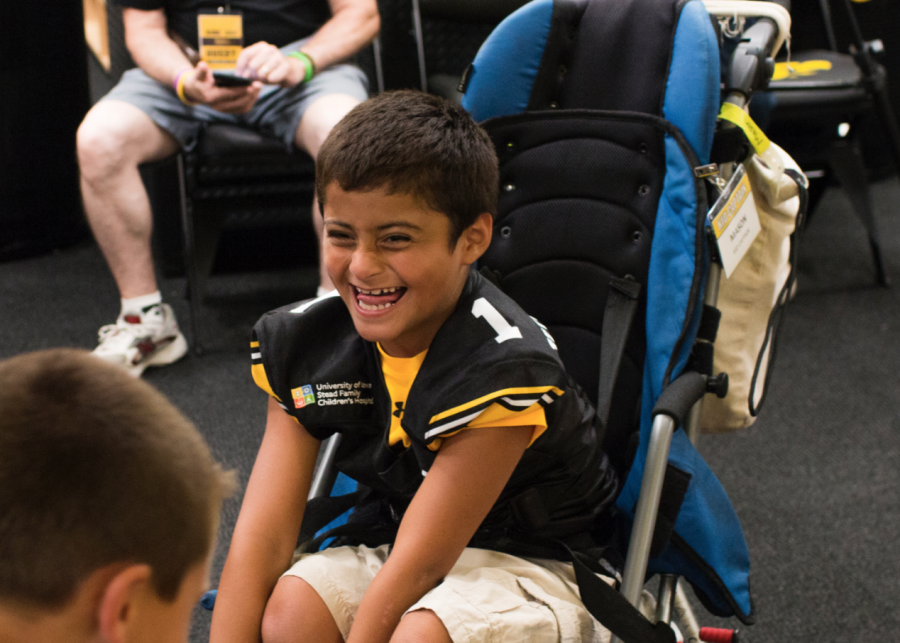 Seven-year-old Mason Gonzalez has his own way of communicating and telling his “mom and dad he loves them.”

Mason, a native of Jesup, Iowa, will be the Kid Captain for Iowa’s football game against Northwestern on Saturday.

He has Angelman syndrome, a rare neurogenetic disorder that affects the nervous system and is characterized by frequent laughter and an excitable personality. It also causes balance problems and inability to speak.

Mason’s speech generating device looks like a small tablet. He presses keys on it to communicate his thoughts.

“When my wife told me that we were expecting a second child, it never crossed my mind that I should think that I hope he is healthy,” father Jesus Gonzalez said. “It is sad how we take his health for granted. A lot parents keep saying that their children talk a lot. I would do anything for my son to express his feelings.”

When Mason was around 6 months old, parents Jesus and Amy Gonzalez started noticing he could not sit up straight on his own.

When Mason was around 1, he had a seizure that lasted for approximately 10 minutes. Neurologists at the hospital were stumped by Mason’s case.

“On our first trip down there, he was acting kind of moody and grumpy; he had missed his nap,” Amy said. “He wasn’t acting his happy, normal self.”

The doctors diagnosed him with global developmental delay. The cause is still unknown.

Mason’s parents scheduled an appointment with a pediatric neurologist about a month later, and on their way to Iowa City, Mason was himself.

Mason’s neurologist looked at his palm. It dawned upon her that the laughter was a symptom of Angelman syndrome.

“There is no permanent cure to Angelman syndrome,” Amy said. “There are gene therapies going on right now, and there is real hope, but until one is found, he will just have to deal with it.”

Mason undergoes regular therapy, which is done locally, she said. He is seen by a neurologist at the UI Stead Family Children’s Hospital once a week.

Abby Waldschmitt, Mason’s speech pathologist, works with him on an ongoing basis.

“He’s a sweet little boy who communicates with a speech-generating device,” she said. “He has been able to find his voice to tell us what he wants and needs. And he even tells mom and dad he loves them.”

Mason goes to school regularly and enjoys it, Amy said. He loves riding horses, an interest he developed as part of his therapy.

“It strengthens his core, because he needs to use his muscles to balance on a horse,” she said. “It has really helped him gain strength.”

Mason was later granted a wish from Make-a-Wish; he chose to swim with dolphins in Hawaii.

“It was a wonderful experience to be all together as a family and not have to worry about appointments and therapy, and that’s a memory we will have forever,” Amy said.