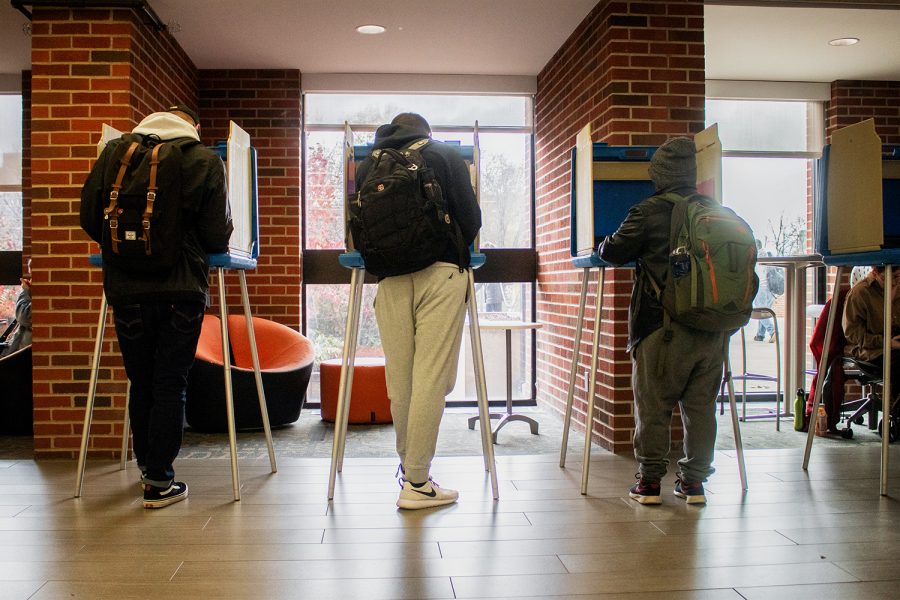 Voters turned out more than the 2014 elections. As of press time, 59.8 percent of Iowa’s electorate had voted Tuesday; 1,296,520 of voters cast a ballot, according to the Iowa Secretary of State’s Office. Seven percent of Iowa’s precincts had not reported results by midnight Tuesday.

In the 2014 election, 47.7 percent of Johnson County voters turned out to vote, below the statewide rate.

In the 2018 primary in June, Iowa had record absentee voting for a midterm primary. It was also the third-highest midterm election primary turnout in the states’ history, with 2002 and 2010 the only years with higher totals.

Voter turnout in midterm elections has fluctuated since 1982, as reported by the Iowa Secretary of State’s Office. From 1982-1994, the turnout for re-election of former Gov. Terry Branstad, a Republican, ranged from a little under 1 million to 1.3 million, with no significant change despite the series of Democratic opponents he faced.

There had not been a substantial increase in turnout upon his decision to not return in 1998, when former Gov. Tom Vilsack, a Democrat, opposed Jim Ross Lightfoot, a Republican. Still in 1998, the state of Iowa had a 51.95 percent turnout with 956,415 voters.

Since Vilsack’s re-election and final term in 2002, between 1 million and 1.2 million voter have turned out for midterm elections.

The 2014 election of Branstad was the largest reported turnout by the Secretary of State’s Office at 1,142,311 votes. Branstad stepped down in 2017 to become the U.S. ambassador to China and was succeeded by Kim Reynolds, who won Tuesday.

Iowa is in a group of a dozen or so states that remain within the 48 to 55 percent voter turnout on Election Day, as reported by the U.S. Census website. Fewer than 10 states typically have turnout rates above that range. In recent midterm election years, Oregon and Wisconsin have been top states for voter turnout.

More than 30 states historically have remained below Iowa’s numbers for voter turnout in midterm elections.

This year, Iowa voters weren’t required to show IDs at the polls; they could sign an oath to affirm their identity and cast regular ballots. A new voter-ID law passed in 2017 will require Iowa voters to show IDs in 2019. Next year, voters who don’t have IDs will cast a provisional ballots, and the votes will not be counted until IDs are provided soon after Election Day.

With the enactment of the law, the state officially received a voter turnout of 59.8 percent at the time of publication for the 2018 general election.

Early vote totals from the Secretary of State’s Office show Democratic absentees led other parties with 19 percent more than 2014. Republican absentees were up 2.8 percent, and no-party votes were up 10.5 percent.